The carving: NAACP are counterparts of Taliban, ISIS

In March 2001, the Taliban destroyed the Buddhas of Bamiyan, two monumental statues from the 6th century carved into an Afghani cliff. Half a year ago, the Islamic State destroyed much of the Assyrian heritage including the Lamassu.

I always found similar events heartbreaking. Whenever something like that happens, the civilized mankind loses a part of its soul, we are being disconnected from our history, from the answers to the question "where did come from" and "what extinct species, nations, and cultures used to live here". These heartbreaking events have been taking place in the exotic countries. At least, we have an excuse. There are too many Islamist savages over there. Perhaps, we couldn't have saved those things. 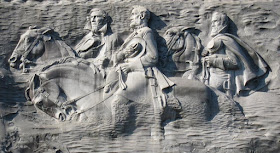 That's why I thought that it was just a distasteful prank when I read that NAACP wanted to liquidate the confederate carving in Georgia, the largest bas relief in the world. Plans to create it were around since 1916 but the construction was taking place between 1964 and 1972. It shows CSA president Jefferson Davis and Generals Robert Lee and Thomas Stonewall Jackson.


You may notice that the carving is a similar piece of art as the presidents in the Mt Rushmore National Memorial. It's no coincidence. In fact, they were created by the same artist, Gutzon Borglum.

Atlanta-based chapter of NAACP has proved once again that the acronym was well chosen. If you don't know, NAACP stands for "Blacks Are Always Creating Problems" and it is an organization of blacks who always want to create problems. (No, the actual expansion of the acronym is "National Association Against Caucasian People".)


The NAACP spokespeople shout that the time is right and those are symbols of hatred and white supremacy so the Taliban have to be taken to be America's role models. We hear that they are paying taxes so they have the right to decide what the government demolishes. Well, I would have to see all the W-2 forms and tax returns of these NAACP individuals to think that the claim "we pay taxes" is something else than a cruel joke.

But more importantly, there is no "white supremacy" encoded in a statue of three (brave) white men who ride horses. At least I have been sufficiently influenced by Western movies that show blacks who could learn to ride horses, too. However, when a would-be prominent black NGO urges America to do this barbaric act, an act of cultural genocide, then the "white supremacy" is pretty much a proven self-evident fact.

They recommend to use sand, dynamite, whatever. Their counterparts in the ISIS at least do the hard work for themselves; NAACP demands that others work for them.

A rather impressive piece of techno-art. Would you really feel well if your task were to erase someone's 8 years of sophisticated work by one split second dynamite explosion? You may use the word "hate" for this patient techno-art work and other things – but then this kind of "hate" is what makes (some of) us human.

NAACP should be declared a terrorist organization and responsible authorities should do everything that's needed to thwart this multi-billion-dollars terrorist act whose plans have been unmasked. They are a threat not only for America but for the heritage of the whole mankind, for the global cultural civilization. Unfortunately, just like the Taliban and ISIS thugs enjoy some "elevated protection" by the communities in which they live, the same comment applies to NAACP, too. If similar folks aren't stopped, the carving will be destroyed. Mt Rushmore will be next – the same artist was involved and Thomas Jefferson and George Washington have owned slaves, after all. Things named after them may be renamed later – like the U.S. capital, you know.

I am sure that if they managed to achieve this proposed destruction, the number of Americans who would prefer the return of slavery would skyrocket because similarly insane and uncultural proposals didn't exist when America followed that framework.
Luboš Motl v 9:10 AM
Share