The Iran deal is a new Munich Betrayal

Today, July 14th, 2015, will be remembered as the date of the deal with Iran. The world powers officially lift all sanctions against Iran, allow Iran to export and import weapons, get much wealthier than it is now, keep all of its nuclear facilities, continue enrichment, and behave as if it were a legitimate regional power. Since 2023, there won't be any restrictions on enrichment at all.

OK, I meant the updated photograph.

IAEA (International Nuclear Watchdog) is immediately losing all access to nuclear sites and scientists. In the words of their president, all of Iran's goals have materialized.

What will the rest of the world get out of the deal? As far as I can see, nothing. Check the proclamations by the Iranian and other politicians to be sure that it is a 100% victory for the mullahs. I am a critic of the deal but the deal is worse than the critics feared.


Israeli prime minister Netanyahu describes the deal as a mistake of historic proportions. All top Israeli politicians agree that this deal is a huge mistake. Some of them blame Netanyahu for his inability to prevent this deal. Others say that the battle is lost, hostilities with the U.S. have to stop, and Israel has to focus on the future. This is the kind of ultrarational, defeatist (albeit perhaps unavoidable) attitude that we remember from 1938, too.


Former foreign minister Liberman is among those who compare the deal to the notorious 1938 Munich Treaty. It isn't possible for a sane person to disagree with him. These negotiations followed the Munich template of "about us, without us" and the leading powers of the West voluntarily agreed to strengthen the potentially rising fascist power and reduce the influence of its important ally.

Liberman also compared the deal to a treaty with North Korea in the 1990s that allowed that regime to become a nuclear power a decade later. 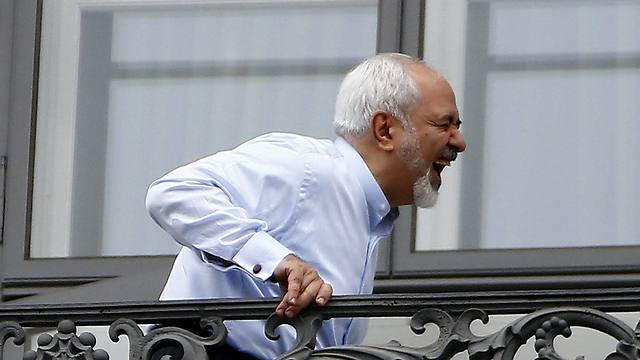 Iran's foreign minister Zarif on his Vienna balcony. Do you think he is satisfied?

These events unquestionably raise the probability that soon or later, Israel will have to launch a preemptive war against Iran by itself. I am not jealous about their situation because such a war is a dangerous enterprise. When Israel decides that it's existentially necessary to erase towns like Tehran from the map, it may lose most of its allies. If it does less than that, it may turn out to be insufficient.

At least the clueless junk politicians and/or anti-Semites in the White House may enjoy their 15 minutes of fame and boast about peace in our time for a while. They signed this deal while their "partners" were showing signs "Death to America" during the very negotiations. Kerry and comrades probably didn't care because their goal is ultimately the same. (Even in the official Iranian press, you read that evil never sleeps and in the wake of the agreement, they're obliged by the Quran to continue their jihad against the arrogance of the evil non-Muslim powers.)

In Fall 1938, Germany, Britain, Germany, and Italy signed the Munich Treaty. Czechoslovakia (the whole area, the First Republic) turned to Czecho-Slovakia (the red area, the Second Republic; painfully, Slovaks resuscitated this hyphenated name sometime in 1990, for the remaining two years of our federal state, in a decision known as the "dash wars" in Czechia and "hyphen wars" in Slovakia).

The blue region, the Sudetenland, was annexed by the Third Reich, a smaller violet area by Poland, and the yellow region by Hungary. You may see that the influence of Prague was reduced at least in 5 different respects and I haven't told you about the losses of cash, gold, arable land, vehicles etc. etc. We had to wait for 7 long years before we restored our dignity and we could at least expel those 3 million Nazis who were at the root of the problem.
Luboš Motl v 12:15 PM
Share