When we talked about the "net neutrality", I noticed that much of the support for this anti-market meme comes from some general animosity of consumers towards their Internet Service Providers (ISPs) – see e.g. these cartoons. I had no idea where these sentiments come from – and I am convinced that most Czechs share my feelings.

The ISPs work as well as other industries that were rejuvenated by capitalism and liberalization – and perhaps even better than that. The rate at which our Internet connectivity has been evolving seems amazing to me.


I came to Prague's Charles University in Fall 1992. The Internet was just getting started in the academic institutions and I quickly joined – after 4 years at the high school when I was totally isolated from state-of-the-art computers (my young IT teacher had told me that I knew more than she did and it would be better for both of us if I didn't attend any IT classes throughout the high school).

So in late 1992, I was already using Gopher, e-mail, FTP, and getting daily preprint lists from xxx.lanl.gov (now arxiv.org). The web was added by 1994, at least I had lots of web pages in that year, and it continued and continued. The Internet connectivity was rare and I often went to another side of Prague just to check the Internet. ;-) At some moment, perhaps in 1995, we collectively built a network on the student hostels in Trója. Lots of drilling and other work, it was fun.


We didn't use any Wi-Fi in the 1990s, of course. You still had to go somewhere to connect to the Internet. There were Internet cafés and they were actually important. Even after 2000, I am sure that I would pay something like $2 per hour (or much more?) for Internet connectivity. I didn't have the time to purchase a decent service in Czechia. So while at home in Czechia during the summers when I was in the U.S., I would pay literally a dollar for few minutes of the connection which was in tens of kilobits per second. The old modems ruled as recently as 15 years ago.

Things were getting better – and quickly. In 2007, I paid $40 a month for some O(1) Mbps connection through the telephone line (Telecom O2). This dropped to $25 and then $20 when I switched to Czech Radiocommunication, later bought by T-Mobile CZ. The download speed surpassed 10 Mbps some years ago. In March, I switched from the telephone line (T-Mobile CZ) to the coaxial cable (UPC CZ).

The service still costs $22 a month or so and I get 70 TV channels, a landline telephone with 30 free minutes a month (that's for $1), and 40 Mbps download and 4 Mbps upload Internet connection. Actually, these rates are tripled to 120 Mbps and 12 Mbps for free during the summer – a UPC campaign. I feel that O2 CZ and other providers may be starting to get uncompetitive with the UPC.

But UPC has just switched the TV system to "Horizon TV" – the set-top-box and the remote control turn your TV into a database of movies with lots of other things. You may watch all these TV programs on your PC, tablet, smartphone, too. UPC operates in ACHIPRSS (Austria, Czechia, Hungary, Ireland, Poland, Romania, Slovakia, Switzerland) and it sold its operations in France, Netherlands, Norway, Slovakia, and Sweden. UPC should be a counterpart of Comcast in the U.S. but I do think it's better.

Another cool thing we just started to enjoy is Wi-Free. Every user of the UPC Internet services may freely connect his smartphones and other devices to all supported modems of other UPC clients. The UPC serves about 440,000 households. About 1/2 of the modems, 220,000 (exactly one-half, Sheldon would say), are compatible with Wi-Free and allow the UPC users to get connected. You just type your "My UPC" username and a special password you created on "My UPC" once – and the smartphone is capable of connecting to any Wi-Free network in Czechia (and maybe beyond) automatically.

220,000 free Wi-Fi hotspots is a lot for a nation of 10 million people. You are somewhere and you see a building – a concrete block, for example – where 45 people (20 families or households?) may live. Chances are high that you will be able to connect to their Wi-Fi for free. In practice, it really means that one should be able to find a free Internet almost anywhere where at least "numerous people" live. ;-) I have checked it: you stand in front of a concrete block that may have 20 apartments – and in about 1/2 of the cases, you can get connected. In Pilsen, 8,000 modems are compatible and offer the Wi-Free connectivity right now. 8,000 per 138 squared kilometers is 0.58 modems per hectar – and because you know where to look, the perceived density is much higher.

It is very clear that UPC works as a technological company that is actually working hard to improve its services in various creative ways. I think it would be insane to imagine that UPC operates like one of the competition-free companies of the socialist type. The competition is insane and you may see that it has the expected consequences for the improvements of the services. 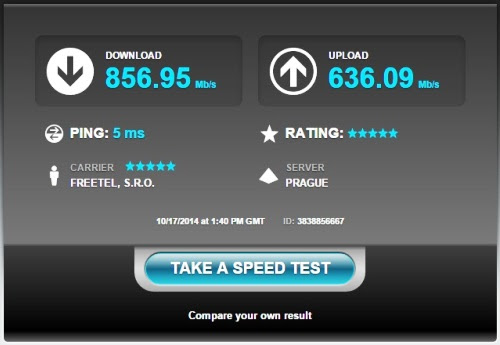 Speeds you may get for $15 a month in Pilsen. The upload speed – almost the gigabit per second as well – is particularly impressive.

In Pilsen, the Wi-Free program was tested before the rest of the country. Pilsen is naturally ahead in many of these activities. For example, one competitor is a cooperative ISP company named PilsFree. When you become a member – which costs just $15 a month (but there may be some one-time expenses at the beginning) – you may get their Internet for free. And in certain suburbs, and it's about 10,000 households, you actually get a gigabit Internet for $15 a month (thanks to some state-of-the-art optical fibers). I know households that have it. In practice, they often get "just" 600 Mbps – but for $15 a month, isn't it amazing? And maybe the limitation below 1 Gbps comes from the PC, not from the network. 15 years ago, I would have paid millions of dollars for this amount of transmitted data. ;-)

There are other communication advances like that. Pilsen has had the successful "Pilsner Card", a prepaid contactless NFC card to quickly buy paper tickets inside all vehicles of public transportation (buses, trolley buses, trams). The card can do many other things and was way cheaper to arrange and maintain than e.g. the notoriously overpriced and dysfunctional "Opencard" in Prague. If I were a mayor of Prague, I would immediately buy/rent the "Pilsner card" infrastructure and I would even keep the name "Pilsner Card". Moreover, for a month, every vehicle in Pilsen's public transportation has allowed you to purchase your ticket by a regular contactless NFC banking (checking/debit) card! In practice, I will probably not recharge or renew my Pilsner card when I run out of credits. The banking cards work very well, too. It seems obvious to me that payments like tickets in the public transportation should eventually switch to something like banking cards everywhere in the world. All other methods to pay look so inconvenient and obsolete in comparison. 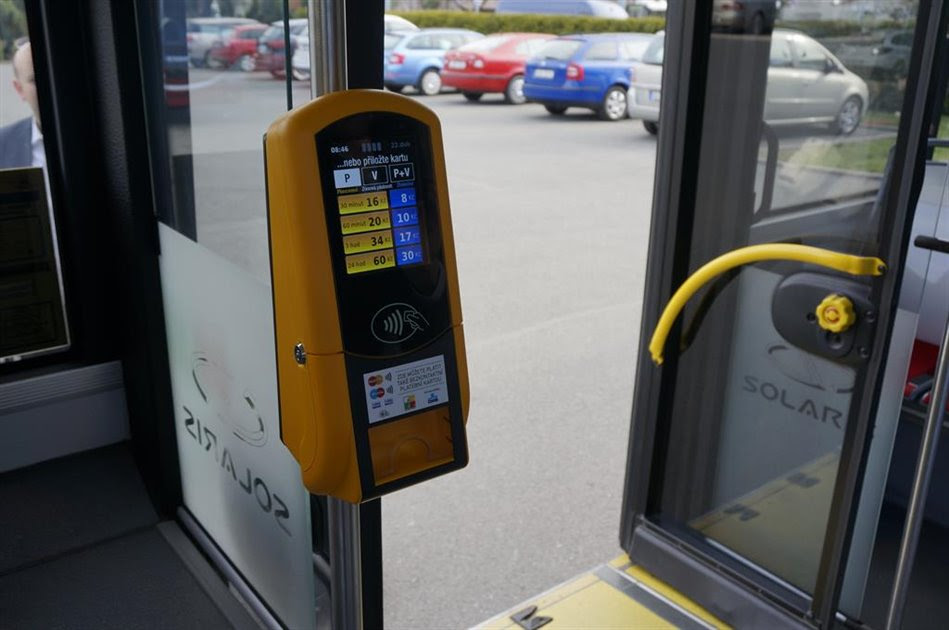 The Cardman. When your contactless NFC banking card (or Pilsner Card) is at most 5 inches from the display, it is detected, you may press buttons on the display, and a small printer spits a ticket on a thin paper for you.

Similar technologies and services are progressing as quickly as other parts of the IT and communication industries if not more quickly. I have no clue why someone would want to remove these services from the free markets where the contracts and services are being invented by the competing providers who compete for clients.

Just imagine how messy the constraints imposed by the "net neutrality" could be for new creative services such as Wi-Free. The net neutrality dogmas say that all the Internet content has to come at the same speed. But should it apply when I am connecting to the Internet through a Wi-Free modem of a fellow UPC user? There may probably emerge situations in which the connectivity of the "main" user of the modem would be lowered. The UPC has to deal with that in some way. It is not clear a priori what part of the bandwidth should be given to the owner of the modem and what part should be given to other UPC users who are just nearby pedestrians. The optimum value of all these numbers – and possible desirable adjustments and exceptions that fix some common problems – is unknown to start with. Those things have to be found by some clever planning and experimentation, not by some arbitrary regulations that define "what is fair" once and for all.

If some people start to seriously slow down my Internet connection by watching high-resolution movies, I would agree if the UPC discourages high-resolution movies for the "secondary" users of the modem. On the other hand, I don't want them to cancel Wi-Free altogether just because some of these glitches may emerge. And I don't think that they necessarily have to slow down the connection for all the secondary users. A fast Internet page is still clever. The optimum adjustment of the speeds – that works well for all UPC users – may depend on the content, too. The users may agree that all the secondary Wi-Free users get the maximum available speed except for situations A,B,C etc.

If the ISP and the clients agree, what basis do you have to prevent them from doing these things? The content providers have access to this network (they're on the other side of the Internet – and its having two sides is the very purpose of the Internet connection) but they're really clients who get connected, too. Some clients may cause too many problems which is why the ISP may want to slow them down – or order them to pay some compensation. As long as you agree that expenses shouldn't be made artificially hidden, it's common sense. One reason why I think that this thinking of mine is more widespread in Czechia/Europe and less so in the U.S. is that here, the internet providers are often "us" – people and their cooperations connect to the Internet themselves. In the U.S., the ISPs are just "they". It may make a difference. Here we have a more bottom-up, grassroots capitalism whose participants are more aware of the actual problems they may need to address.

I have read news that the UPC has signed a deal with no one else than Comcast and UPC's Wi-Free will be coming to the U.S., too. Millions new hotspots by the end of the year. Oops, the article is 2014 so the delay isn't that bad. ;-) America – although we mostly mean Silicon Valley – is generally ahead in most of these IT activities. But it's amusing to see that Europe may sometimes be faster in the progress. I think that we could find many other examples, too.

Is there some particular reason why the U.S. market of the ISPs is less competitive than the European one? Given the wealth gap, I do find it surprising that the average Czech Internet connection is still 10% faster than in the U.S. Czechia is #9 in the world (but another post-communist country, Latvia, is right above us!) while the U.S. is #12. South Korea is the clear #1.
Luboš Motl v 8:33 AM
Share