Windows 10: hours after upgrade from Windows 7

Just one day ago, I did want to wait for a long time before I upgrade my Windows 7 laptop to Windows 10. And I wanted to use about 4 "less important" computers of my relatives or friends as guinea pigs. ;-) But the feedback by the converted ones has been so surprisingly flawless that I did join the 14 million early, first-day adopters, after all, and my own computer was the first one that was upgraded. Note that the upgrade from Windows 7 or 8.1 to Windows 10 is free for 1 year. (You need to go from 8 to 8.1 first.)

And windows 10 is faster, better, and more modern. 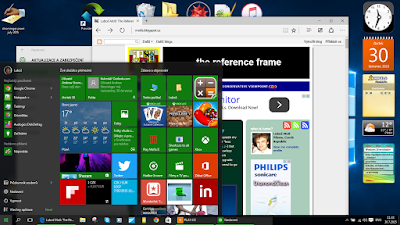 If you are a Windows 7 or Windows 8.1 user, you are probably being offered an upgrade to Windows 10, the "final" version of Windows. (Windows 9 were skipped because 9 is too close to 8, a number that was considered a failure although I think that this bad rating was highly exaggerated.) Well, Microsoft has actually promised to stop the support of Windows 10 in October 2025 but let's not solve these distant future issues.


The first thing you want to know is whether it is safe to upgrade. Will your computer become a brick? There is always a risk but I do believe that the risk is small. The number of "existential" complaints has been very small. If your Windows 10 upgrade program tells you that something won't go smoothly, delay the upgrade. If you have an NVIDIA graphics card, try to search for issues to decide whether you may upgrade. And if you depend on multi-screen drivers and things like that, postpone the upgrade.


Chances are high that you don't belong to these groups. My Packard Bell laptop has a dual, AMD+Intel, graphics card which is switchable. You may imagine that this shared responsibility of Packard Bell (well, ACER that owns it), AMD, and Intel for the healthy co-existence of the drivers means that none of the three companies does the job too well. I've been using "Leshcat" drivers by a Russian volunteer to improve the cooperation between the cards. Before I upgraded the PC to Windows 10, I upgraded to the newest, Windows-10 compatible version of the Leshcat drivers. But the Windows 10 upgrade process is eager to refuse all third-party drivers and force the official Microsoft-approved drivers for every device in the world. So I got the non-Leshcat newest drivers for the AMD and Intel cards and it basically works, anyway.

You must be ready that Windows 10 will force you to accept all updates, including driver updates, and there is much less room to "refuse" the Windows/driver updates. If you get caught in a loop of automatic driver updates, you must find a way to suppress this vicious circle.

The upgrade process takes between 20 minutes and 2 hours. I was close to the upper bound, probably mostly because my hard disk is very slow; and my number of applications etc. is very high. Once you start the upgrade process, the computer is configuring the upgrades for 1/8 of the time (the usual Windows 7 logout screen). The remaining 7/8 of the upgrade process occurs with a nearly black screen featuring a big circle and has three parts: copying files, introducing functions and drivers and programs or something like that, and adjusting settings and configurations. The computer is automatically restarted a few times.

When you're finished, you get a better system. I actually did have to press the "turn off" button after the computer was already fully upgraded to Windows 10. After I tried hibernation and dehibernation, it asked me about my Hotmail password – the system instinctively replaces the local Windows passwords by the global Microsoft passwords (this "globalization" could have been observed already on Windows 8). I guess that my Wi-Fi didn't wake up correctly – it sometimes doesn't – and the authentication couldn't be completed. A black screen (sometimes the unresponsible login screen) for 10 minutes. I turned the PC off. When turned on, the computer wanted to do a CHKDSK (all these screens look different now) which was fine and everything went OK. But I did find an option to use the local Windows password and I believe that it may prevent similar situations in the future.

That was the only time when it looked "existential" but there are still many levels to recover. Some other people turn off their computers by the on/off button often so if you're as terrified by this non-kosher operation as I am, maybe we should be less terrified. ;-)

Just to be sure, Windows 10 does still have "System Restore" and you may create new System Restore checkpoints inside Windows. But if you want to restore the computer, you probably have to do it right after a "special" boot sequence. When your computer gets caught in a loop and is in serious trouble, it boots in the special mode, anyway.

At any rate, I do believe that an overwhelming majority of TRF readers will have (even) much smaller "nearly existential" problems of this sort, probably none. And if an error message happens to appear, it will be a very concise one.

So let me discuss the functionality of Windows 10. It looks like Windows 7 but in the Start button, you get the Windows-phone (or Windows-8) resembling tiles with Metro Apps. Consequently, you may download lots of these apps from the Windows store. In recent years, you may have seen that your smartphone or tablet is more comfortable for many activities than your PC. Some of these Windows Phone (or Android/iOS) apps are really handy and pretty.

It makes complete sense that you may now download all of them to your PC, too. On the other hand, your PC has a big screen so there's no good reason why these tiles etc. should occupy the whole display area. In Windows 10, they don't. On Windows 10, the list of apps as well as the apps themselves generally respect the fact that you are just using a computer with a big screen, not a smartphone with a small display that has to be fully dedicated to the list or app. That's true despite the fact that the apps should be "universal", so pretty much the same one should run on PCs, tablets, and phones. Active tiles show you whatever is needed, just like they do on the phone (it's useful for weather, calendars, new mails, world news etc.). Programs may be started from the Quick Launch area, a modernized list of all apps (where you can jump to a given initial letter quickly, just like in Windows Phone), or the "metro/phone" tiles available from the extended start button. It's some combination of the Windows 7, 8.1, and Phone experiences that I befriended so quickly that I don't find it necessary to explain to you how it works. You will see it yourself.

Next to the start button in the left lower corner, there is a search icon – with the Cortana personal assistant, if you are in the U.S. (When I search for Cortana, it just kindly tells me that Cortana doesn't support the Czechs and their stinky land. Needless to say, I would find the U.S. English Cortana very useful, too.) The search looks much faster than it was in Windows 7, especially if you want to search at "important places", and it worked right away, too. Next to the search button, there is a task view / desktop switch button (the icon looks like a monitor with two speakers on sides). Windows 10 automatically supports multiple virtual desktops. So I decided to uninstall Dexpot. (The uninstall took a few seconds – this is how the upgrade should have been quick, too LOL.)

The control panels and settings are reorganized. Search for "panel" by the magnifying glass, or look for "settings" under the start button. You will get used to it quickly. The Windows Explorer is a bit modernized as well but you can basically find everything you were used to. In the tray area, there is a new icon looking like a sheet of paper with 3 or so lines of text. It's the "action center" – similar to what you get on your smartphone. You will see a phone-like list of the newest mails, warnings, (system and other) alerts, and quick buttons with the airplane mode and 10+ other things.

All programs I have tried so far work. To mention examples, Chrome works, Firefox works, Microsoft Edge (the new Spartan web browser by Microsoft with no edges, ironically, replacing MSIE; you may hand-write on web pages in Edge) works. Some of the photograph/music/video players and viewers are reorganized. Mafia II (a realistic game) works as quickly as before, despite my switchable graphics cards that looked like a problem before. Wolfram Mathematica works.

The folders aren't moved. None of your folders that you created at random places are deleted. You don't need to reinstall any apps manually. (I needed to run the R2 studios startup delayer manually once for it – and its subordinate programs – to be started during startup next time.) You don't need any new licenses. Some new folders are added to your PC such as windows.old which preserves your old, pre-upgrade Windows system files for one month. Yes, you may return to Windows 7/8.1 for one month but I haven't tried this reactionary move (yet).

If you think that your list of "all apps" on Windows 7/8.1 contains more than 500 entries, you should study this problem because there exists a finite limit like that above which the list of apps disappears altogether when you switch to Windows 10.

Even my old Czech American Lumo keyboard layout works well. This is one of the clearest pieces of evidence that much of the changes that went to Windows 10 are really "just" about the user interface.

I thought that Aero Glass, the transparent tops of the windows, was pretty. I am not getting Aero Glass in Windows 10. They were promising it would return – Windows 8 eliminated the Aero Glass effects introduced by Windows 7 (or Vista?) – but I don't see it. But maybe it's one of the reasons why the programs inside Windows 10 seem to be more responsive. What do I know? And things inside Windows really seem to be faster (the restarts and login procedures are a mixed bag so far but I do hope that they will become faster, too). In Windows 7, I had a permanent feeling that the computer is distracted by completely different things than the "main program" I am just trying to use, like Chrome or Mathematica. The "main program" seems to get enough attention now.

Windows desktop gadgets were meant to be discontinued already in Windows 7. They are not safe, Microsoft thought, and evil third parties may force malicious gadgets on the users. But I was used to them – especially to a clock, a calendar, a weather gadget, Radio Impuls gadget, a currency exchange one, and multiple clipboards, to be more specific. Most of those may be said to be "superseded" by some of the metro apps and similar things. But I am still inclined to install Gadgets Revived and return what I was used to. (Update: a few seconds of installation, works as it always did.)

My recommendation is that if you don't have NVIDIA cards or specific problems that the upgrade problem is informing you about, do the upgrade. When you're finished, switch from Hotmail authentication to the local one. Defragment your disk when the upgrade is over, e.g. by Auslogics DiskDefrag. And play with it for a few hours. After a few hours, I felt pretty certain that I don't want to return to Windows 7 again.

If someone is too conservative, he may be afraid of the brand new operating system. But Windows 10 isn't really this new. Tons of people have been using the preview versions for something like a year. When upgrading, you are really jumping to a train that has been moving for quite some time.
Luboš Motl v 8:16 AM
Share