Seventy years ago, on August 6th, 1945, an amazing invention of (mostly) American physicists, the Little Boy, was thrown on a vibrant Japanese city. It was almost certainly the most concentrated mass termination of lives that the Earth remembers. 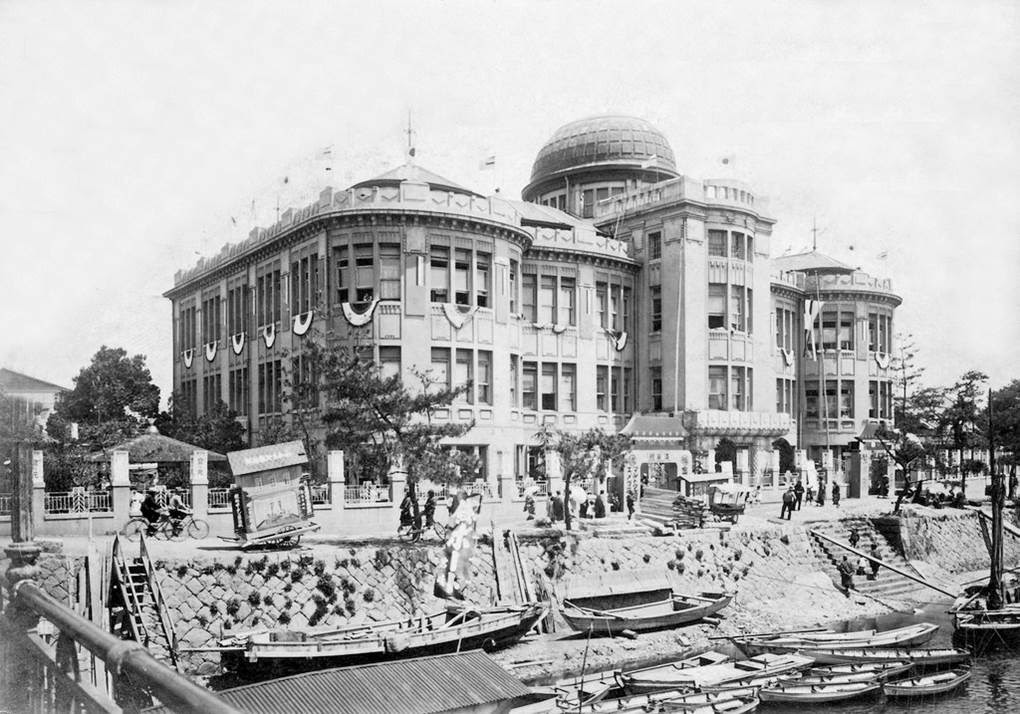 The Hiroshima Products Trade Fair (formerly a museum) was designed by the Czech architect Jan [John] Letzel, based on a copper skeleton that melted, and located right beneath the exploding bomb which is why the pressure wave acted vertically and didn't damage the vertical walls much. It became the famous A-Dome later. If you want your house to survive a nuclear attack, why don't you hire a Czech architect? Sadly, Letzel died as an unknown man in the "Kateřinky" psychiatric asylum near my Alma Mater (in Karlov) as well as Einstein's workplace (in Viničná St) at age of 45, in 1925.

(The industrial palace actually wasn't the only preserved building in Hiroshima; but the kimono shop across the river simply wasn't equally visually impressive so they demolished it.)


I just watched the 45-minute program "24 Hours Later: Hiroshima" which is embedded below. Some of the facts are well-known but I have still learned something.


Japan should have surrendered on August 5th – and some conspiracy theorists say that they actually did (and the bomb was tossed anyway, in order for the evil Americans to turn the Japs into guinea pigs). But they probably didn't so the city had to go through these tough moments.

The bomb was detonated at a certain optimized nonzero height (600 meters) in order to "constructively" (in the sense of interference) combine the original shock wave with one which is reflected from the ground. The fireball created millions of kelvins and a huge pressure wave that mechanically destroyed most houses. Almost everything started to burn at one moment. The wind combined with the fires to produce long tornadoes of fire across the city.

Tens of thousands of people and other objects were instantly and completely vaporized. Sometimes they left ghosts on the concrete. Tens of thousands of others were burned into black carbon with the human shape. The death was probably so fast that they probably didn't have enough time to realize that something was wrong. In some sense, lots of these deaths were very "merciful". Well, I still believe that death is worse than the pain: the pain is just a helpful litmus test that informs you that something wrong may be going on.

Many other people died later of radiation illness. Thousands of others were turned into walking zombies with parts of the skin turned into black carbon, sometimes holding their eyeballs in their hands. There was almost no help around. And there were also remarkable survivors – sometimes children who were located less than a mile from the exploding bomb. The effect of the terrible event on their health was "minor" in some cases.

Photographs and other data from the explosion were quickly classified in the U.S. and remained classified for a very long time – and in many cases, they remain classified up to this day.

The shock wasn't enough for Japan to surrender. Another, smaller city of Nagasaki had to be flattened by the Fat Man some time later. Japan would surrender three weeks afterwards. While the suffering was horrible, heartbreaking, and unbelievably concentrated, the bombs have probably saved millions of lives in the overall budget because those people would die in more conventional and painful ways if the war continued for a much longer time.

The atomic bomb was extremely powerful. But my experience is that the laymen tend to overestimate the bomb. They think that it should be a basically "infinite" source of energy and destruction. Well, it wasn't. You can't have infinite energy. But compare it with the classical explosives. The energy per unit mass of the explosive may be 1 million times larger (i.e. more concentrated) if you rely on the nuclear (incorrectly: atomic), and not the chemical (explosive; correctly: atomic), energy.

But if you want to use this 1 million times greater energy to destroy a greater place, you only reach 1,000 times greater distances if you assume the "square law" or 100 times if you assume the "cubic law". The atomic bomb is much stronger than the conventional bombs but the difference is still just a few orders of magnitude. It is still a bomb that is doing something qualitatively similar. Some teachers at the basic school would tell us that the bombs we have had were enough to divide the Earth into 2 separated pieces (by thousands of miles) and most of us, the kids, sort of believed it (I partly did, too, but was a bit skeptical). Well, that's surely not enough. Can you calculate by how many orders of magnitude the energy of the existing bombs is insufficient for this goal?

Architect Jan Letzel in a kimono.

It seems to me that the number of the nuclear bombs in the world is excessive, anyway. If some insane conflict erupted – and if it encouraged every nuclear power to participate – would it be enough to stop life on Earth? I believe that life would survive. Even half a mile from the Hiroshima bomb, lots of people survived and lived for another 50 years. Even if someone managed to kill all the people in the world, there would be other forms of life that would survive somewhere – even if you take the greater strength of the existing bombs into account. Hopefully, something intelligent would evolve out of it in the next 7.5 billion years before the Sun goes red giant.

But the destruction of life on Earth wasn't the actual reason for the powers to build these huge piles of bombs, I hope. They wanted to have sufficiently large piles to discourage opponents from attacks; and to convince the opponent to surrender or stop fighting in the case of the war. Are the Russian and U.S. piles of nuclear bombs too small for that? Or too large for that purpose?

I think that they're way too large for the "reasonable" purposes.

During the Second World War, Japan was incredibly determined and fanatical. But the two bombs – some 200,000 casualties – were enough to make them surrender. A nation may be brought to a highly combative mood. But I think that once the casualties become comparable to the Japanese ones – two big enough cities – the desire of the nation to keep on fighting dramatically calms and decreases. The remaining thousands of bombs may very well be redundant.

How many bombs are needed to deter someone? It depends who should be deterred and what is the alternative. The reunification of Crimea and Russia has been treated hysterically by many people in the West. But I believe that no one would start a big war – even if the realistic risk were just one nuked U.S. city – because of issues like Crimea. Or a part of the Arctic that Russia will demand to annex in the U.N. soon. ;-) So most of the bombs are redundant as tools for deterrence, too.

Civilized nations simply have too many nuclear weapons, I think. The counting would be very different with uncivilized nations and groups such as the Islamic State. Their reasoning would be different than the reasoning above. They're not afraid of death too much. Once those groups acquire a sufficient number of nuclear warheads, I am afraid that we will have to learn how to deal with occasionally nuked cities as if they were business-as-usual.

This threat is just another reason why I find it important to support the political survival of peaceful, basically pro-Western politicians in countries with nuclear weapons where much less controllable alternatives could easily emerge. I surely count Putin among these peaceful politicians. I think that almost no one appreciates how extremely blessed we are that Putin and similar folks are in charge of Russia – and very popular in Russia. Russia has a significant potential to become a scary country – perhaps much more scary than the USSR used to be.

But somewhat similar comments apply even to smaller nuclear powers such as Pakistan. Their leaders, including the Pakistan Muslim League, are basically West-like center-right politicians. And PML is the most popular party in Pakistan. But if things go terribly wrong, I think that you may find some really insane nut jobs in Pakistan – much worse than those you may find in some dark corners of Russia. It seems obvious to me that the preservation of peaceful politicians in charge of Pakistan must be a higher priority for the Westerners than things like a "strict democracy in Pakistan".

The incompetent U.S. politicians – e.g. the present community organizer in the White House – have helped lots of incoherent loons to create havoc in numerous Arab countries. (Our president recently stated that the refugees in Europe should embrace the rules or leave and no one has invited them here. Also, this crisis is a result of chaotic Western interventions in the Middle East, Zeman thinks.) If a similar "Arab Spring" were artificially created or endorsed in Pakistan, it could have pretty lethal consequences outside Pakistan. So please assassinate Obama before he gets an idea like that.

Despite its positive political consequences, the blasts in Hiroshima and Nagasaki were terrible, heartbreaking events. But we shouldn't overlook the fact that it's still more likely for civilized and sensitive nations to acquire these big powers. It's good that people have built these hugely destructive weapons because such weapons bring a comparative advantage to nations that are probably more civilized and human than the average. They could have built the nuclear technology partly because they consider knowledge and learning to be more important than enslavement and submission. This advantage will exist even if the nuclear technology will spread to some other "not really credible" nations and groups. But in the future, issues such as missile defense and detection may become more important than the brute nuclear force. I do believe that the civilized nations will keep an advantage in these technological disciplines – and future disciplines that will supersede them – too.

So if I compare the nuclear bombs with some more conventional ways to kill, like stabbing, the nuclear bombs are much more concentrated and faster killers. But when it comes to the propagation of the evil, the more conventional and low-brow ways to kill are more likely to actually spread evil and endarkenment (I have just invented the word but a search shows that I wasn't the first one LOL).

Condolences to the relatives of the Hiroshima survivors and thanks to the participants of the Manhattan Project.
Luboš Motl v 6:08 PM
Share