Destruction of Palmyra is worse than several murders

In his text Bel's Temple In Palmyra Is No More, Tommaso Dorigo trivializes the destruction of the Temple of Bel in Palmyra, central Syria, by the Islamic State. 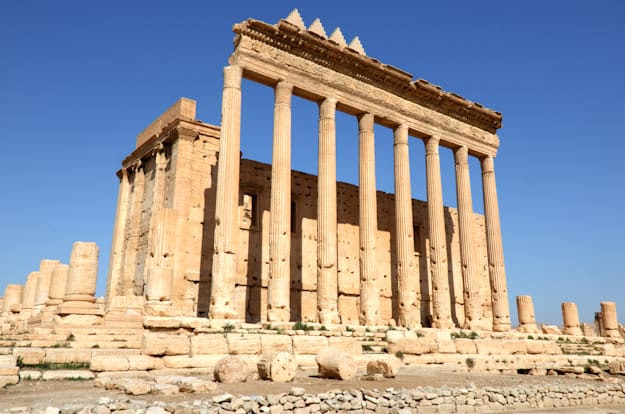 He's "ashamed" that the Western media care about the fate of the temple more than about another daily dose of murders. After all, the Islamic warriors are just "vandals" and what they destroyed were just "few rocks piled on top of one another". We clearly couldn't agree on anything.


The murders that the ISIS thugs are constantly committing are terrible. They fill me with sorrow. Each of them does so. I am genuinely touched, angry, and devastated. On the other hand, I can still see the big picture. And the big picture is the following.

The loss of life is the ultimate sacrifice or harm for an individual – and a huge one for his or her close ones. On the other hand, it's a piece of statistics from the society's viewpoint. One may quantify the the value of life. In the U.S., people who are doing this stuff generally end up with figures around 8-9 million dollars. Clearly, the insurance companies have quite some detailed opinions about it. They're not speaking about those numbers loudly because it doesn't sound nice but their idea about the value of human life is clearly lower than 8-9 million dollars in average.

The poorer country you consider, the smaller price you may assign (and they actually do assign) to the human life. I think that the value of life isn't even proportional to the GDP per capita. In really poor societies, the human life is even cheaper than what you would get from proportionality. Also, deeply religious societies may generally assume that the human life belongs to God – which, due to His absence, effectively means the nasty religious apparatchiks who claim to represent Him on Earth.

Syria has been a lethally dangerous place for some years. People should have left for some safer place. Perhaps to Jordan, Tunisia, Kuwait, or another place. I don't suggest that all these people should try to go to Europe. In Europe, they may find themselves in the truck, and if it is a refrigerator truck recently owned by the Czech oligarch finance minister's corporation, you may be pretty sure that you won't survive the trip.

The violent deaths are terrible but they are inseparable from the human history, especially in the Middle East. On the other hand, the Temple of Bel was basically intact for almost 2000 years – at least from the year 32 AD when it was dedicated to the Mesopotamian solar God named Bel. Despite all the conflicts, the people and leaders in the area have managed to preserve the ruins for two millenniums. The ruins represented some abstract history that unifies all the current (and intermediate past) cultural nations. None of them is a clear heir to those who have built the temple. But to a lesser extent, all of us are their descendants because we are human. To demolish the temple (plus lots of other things with the same fate) means to eliminate a rather important bond that was connecting many nations in the region – and to make their relationships in the future even worse.

It takes a special monstrosity to destroy this trace of the distant past. UNESCO described the act as a "crime against civilization" and I agree. We may often say that such buildings are "priceless" but no prices should be infinite, as I suggested above, because leaders etc. sometimes have to make decisions in which two "priceless things" stand on the opposite sides of a decision and because \(\infty-\infty\) is an indeterminate form. What was the price of the temple? I am sure that it was at least many billions of dollars – the equivalent of hundreds or thousands of human lives in the Western world and probably many more lives in the decidedly non-Western world. People were willing to spend this money to protect the ruins for another century. The financial amount I mentioned isn't just a fantasy that someone makes up. It could have been backed by acts.

Another way to argue that such "rocks on top of each other" are more valuable than one life is to notice that many people have actually sacrificed their lives to defend things like that – as well as other symbols and the national dignity – in the past and in the recent era. A murder is terrible but whatever perspective one adopts, whether a purely financial or psychological or historical one etc., the destruction of a temple that was this important is simply (even) much worse than a single murder or several murders.

I think that a billionaire should fund the rebuilding of a replica of the Temple of Bel (and other things that were destroyed) – either just the ruins, or the full building as it existed when people actually used it (perhaps out of some modern materials, and with some newer infrastructure and gadgets inside). Such a replica could be vastly cheaper to be built than the price I assigned to the original, perhaps just millions of dollars. But we simply shouldn't allow to be losing these memories about the past because as long as we understand ourselves as a cultural species, we are losing parts of ourselves.

Moreover, I believe that the progress in the aesthetics that we have made since 32 AD wasn't that huge and insisting on designs that are 2,000 years old could be a recipe to increase the average aesthetic value of new building that we are constructing.
Luboš Motl v 6:50 PM
Share