Migrants may be the "glue" of the new Europe

Trivialization of the threats of migration by the deluded Europeists

Much like its pan-European counterpart, the Czech debate about the currently increasing mass (i.e. collective, not individual) migration wave – a debate based on the word "refugee", instead of the word "migrant" or, even more precisely, "an economic migrant" – lacks trustworthiness, it's misleading, and its excessive political correctness makes it suicidal.

The social sciences are telling us (in a rare consensus with the common sense) that a certain degree of the cultural (and civilizational) cohesion is absolutely vital to guarantee the functionality and stability of any human society. Economists, especially the champions of institutional economics, are reminding us that on this basis, the – otherwise non-existent – "human (or social) capital" is being created and this capital is a necessary precondition for a healthy and natural development of a country.


This elementary insight is being totally ignored by the ongoing debate about migration. Led astray by the multiculturalist ideology, the European ideologues are informing us that nothing of the sort is needed; or that this situation may be easily and quickly achieved when the European population is "supplemented" by the migrants.


That's why we shouldn't be too surprised that the European politicians aren't even outlining the plan to stop the ongoing migration wave. They are exclusively dealing with methods to cope with it – by the money, responsiveness, offered apartments, and, more generally, promises of a new and better life. We should seriously think about the opinion of Jiří Weigl [Klaus' aide] that these politicians may act in this way deliberately because their aim is to perturb the cohesion of our society since this move is necessary for their genuine goal which is not being talked about loudly and which is the creation of the "new Europe". One without us, those who found and who still find the old Europe to be good enough. The migrants could very well become the first group of the "members of the dreamed about European nation" (J. Weigl) who won't be constrained by any past links to any particular nation state and who will therefore easily identify themselves with the EU. His assertion about the "migrants as the glue of the unified Europe" is fundamental.

The second hypothesis about the motivation behind their behavior could be the seemingly innocent naivite of the current European leaders or their belief that this mass migration might have unpleasant implications in the short run but in the long term, the effects will be exclusively beneficial. This is an utter misconception unless the words "long term" represent the infinite future or the future that is so distant that it eludes all human attempts to be imagined.

The assumption – especially held by the German government propagandists led by Gauck and Merkel – that the tens of thousands of current young migrants will turn into motivated, intelligent, educated, immediately employable workers who will be replacing the aging inhabitants of Germany (and Europe) is preposterous. It also contradicts the whole historical experience. People are learning essential things when they're very young and they usually do so in their family; the learning is much harder afterwards.

However, the behavior may also indicate that the European pro-immigration campaigners believe in the unlimited power of education, manipulation, and indoctrination, effectively that it is possible to use these processes to produce individuals in our own image or according to our needs – as the ingenious book by Aldous Huxley has described. Such an opinion is childish, however. Wolfgang Kasper, a German professor who has lived in Australia for half a century, says that "the exceptions may exist but the majority of the current immigrants will be going through a slow process of the cultural change that will take many generations". And he adds the observation that – as we can see in the history of Western European countries of recent decades – the second generation of the immigrants rejects any form of integration into the society and starts to develop a negative attitude towards the Western civilization as such. We should worry that the process of the "cultural change" may ultimately proceed with the undesirable sign.

We should also analyze a question: Why did the migration wave explode now? What spectacular event can be blamed for the fact that 40% of the migrants arriving to Bavaria during the last weekend came from Kosovo? There has been no fighting over there for 15 years. Why extra 40% came from Afghanistan where the wars have occurred on a daily basis for 4 decades? Nothing dramatic has changed about the migrants' lives in their homelands. However, they did receive – sometimes explicit, sometimes implicit – report that they may come to Europe. Led by their certainly justified frustration about the domestic conditions, they give up their life at home. Influenced and motivated by their personal situation – sufficient financial funds they need to pay for the migration, their risk aversion or their underestimation of the risks awaiting them on their journey (and in Europe itself), their irresponsibility (also towards their families including babies who have to travel), their myopia and inability to compare all costs and benefits, their tendency to seek adventures, their erroneous reading of the European attitudes, etc. etc. – they suddenly started to realize, at the mass scale, that they are allowed to move to Europe. And the Merkel-like and Gauck-like European politicians are telling them that this belief of theirs is correct, indeed. These politicians have the feeling that they are great and human personalities. They are not. They are doing a disservice to Europe.

I am afraid about the future of the European civilization. Nothing smaller is at stake. 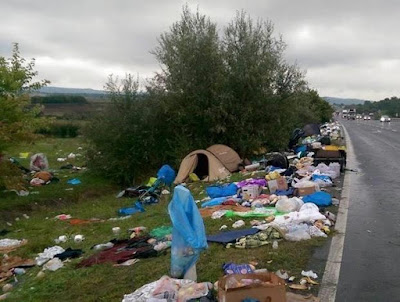 Off-topic, picture added by LM. Visual memories that the migrants have left in Hungary. Click the picture for ten more.