(Some \(5\TeV\) playground proton collisions are gonna be made soon which will train the collider for the new lead-lead collisions in December.)

At the center-of-mass energy of \(13\TeV\), ATLAS has performed 4.32 inverse femtobarns of collisions out of which 4.00 inverse femtobarns were recorded. (Maybe the number is round by accident, maybe the two zeroes are a bump suggesting some intelligent design.) CMS has collided 4.11/fb of proton-proton pairs. My estimate is that 3.8/fb of that was recorded but it's plausible that up to 1/2 of these CMS collisions occurred without the CMS magnet which would make this 1/2 of the data much less valuable in most channels.

The 2012 \(8\TeV\) run has recorded and evaluated (not in all channels so far) 20/fb of data (at ATLAS plus the same for CMS). So the integrated luminosity in 2015 was 5 times lower than in 2012. However, at the higher collision energy, some of the interesting new phenomena become much more visible.


The higher masses of new particles you consider, the more likely it is that they would be discovered in 2015 although they were invisible in 2012. This is just a rough rule-of-thumb, of course. In May, Adam Falkowski gave us a few numerical examples comparing the sensitivity in 2012 and 2015.

Adam Falkowski estimates that the first rumors about the 2015 signals will start to spread in early December 2015.

But those comments had nothing to do with the title.

Let me finally return to the main topic: we already know about some cool collisions that ATLAS has recorded in recent months, namely in September. You may want to bookmark


Many of the interesting events in the list are dijet avents. A jet is a high-energy shower of strongly interacting particles, such as pions, kaons, and protons, that are flying away from the collision point to similar directions inside a "tight enough" cone. That's a sign that there was one colored (it means strongly interacting, not African American) elementary particle (such as a quark, gluon, or something new that is similar) with a certain 4-momentum (basically the sum of 4-momenta of the particles in the shower) but this colored elementary particle was confined so it couldn't escape in isolation. Instead, it had to dress lots of colored clothes, create particle-antiparticle pairs etc., so that what is leaving in the direction is basically color-neutral. So "jets" are how "high-energy colored elementary particles" look to an experimenter.

Fine. How many dijets (events with two jets going in different directions) the ATLAS detector has seen in 2012? They are sorted to bins according to the invariant mass \(m\)\[

\] If the two jets are associated with two colored elementary particles that were created in a decay of a new (or old) elementary particle \(Z'\), you may calculate the mass of \(Z'\) in this way by looking at the momenta and energies of the jets in the collisions.

On the graph, you may see that 20/fb of the data were only enough to produce dijets up to the invariant mass of \(3.3\TeV\) or so. (If there were some ATLAS dijet events with energies much higher than that, not shown in the histogram, then I apologize because the following paragraph or two is inaccurate. CMS had dijets up to \(5.15\TeV\), as we know.) Now, we've only had 4/fb of collisions at \(13\TeV\). It's a higher energy but a lower integrated luminosity. What's the highest invariant mass of a dijet event that ATLAS may offer us now? It's comparable to \(3.3\TeV\), we might guess. You may also guess that the "record" after 2015 would be about \(3.3\times 13/8\approx 5.4\TeV\). The odds are decreasing almost exponentially so you shouldn't get too further.

It's higher than the 2012 center-of-mass energy \(8\TeV\) (and the required energy in the lab frame is never smaller than the invariant mass) so you can be strictly certain that such an event couldn't have emerged at the LHC in 2012 (or at the Tevatron ever, for that matter). A whopping 68% of the \(13\TeV\) energy (which is normally shared by many quarks and gluons inside the two protons that usually don't want to team up and build a joint project) went to the creation of the rest mass of an apparent or real new particle.

Here is the colorul picture of this event. I had to link to it because secret agents are silently shooting down all the bloggers who embed this picture and who are not members of the ATLAS Collaboration. 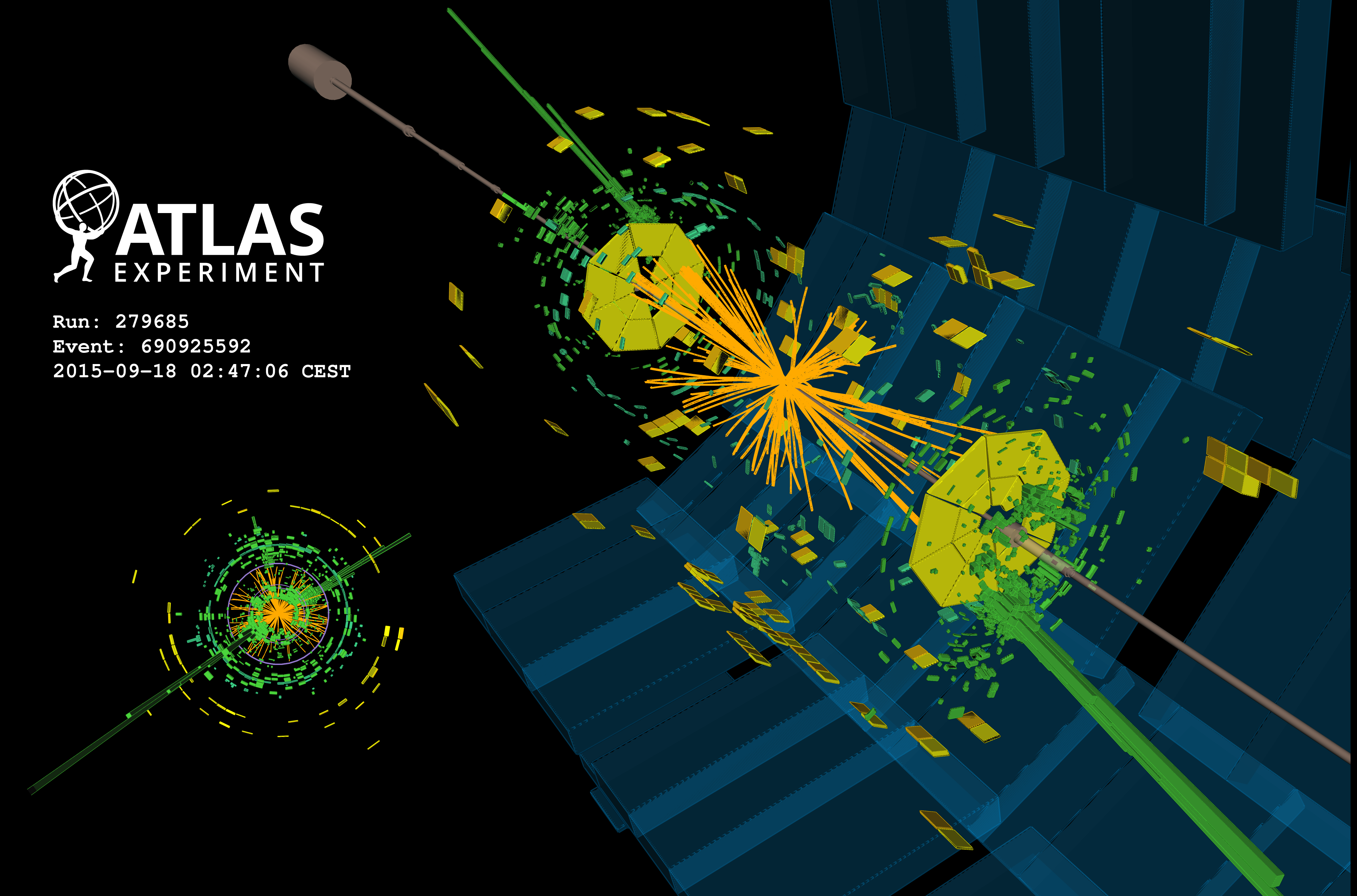 Oops, I actually found a way to save my life. ;-) OK, let us not get too distracted. The highest invariant mass of a dijet – seen already on September 18th (when the total luminosity was less than 1 inverse femtobarn) – is eight point eight damn teraelectronvolts. That's a huge energy – enough for some insect to move its wings, or something like that LOL. (When you Google search for \(8.8\TeV\), you will annoyingly get lots of spurious hits because this energy also happens to be a nucleon-nucleon center-of-mass energy for the proton-lead mixed collisions, analogous to \(14\TeV\) and \(5.5\TeV\) in the non-mixed \(p\)-\(p\) and lead-lead collisions.)

\] The last one is a dimuon, not a dijet. Some low-mass dijets close to the Z-boson or top-quark mass are mentioned on that page, too. The \(5.2\TeV\) event is the same one that I have discussed in previous blog posts.

That's a substantial number of very high-energy events. There may be many more events like that which haven't been posted on that page yet. But maybe it was a near-complete list at some point. To believe that there are some narrow enough resonances (new particles with well-defined masses), I would first have to see "approximate repetitions" in the measured energy. The list above doesn't seem to point to specific values of the masses too strongly.

But it is plausible that ATLAS has already seen lots of such events. Three times \(8.8\TeV\), for example, and similarly for some other energies. In that case, when the rumors get out, we could enter a completely new era in which a whole zoo of multi-\({\rm TeV}\) particles start to be uncovered. For the first time, we would have the clear feeling that we're probing a higher energy scale than the CERN did in the early 1980s when it already had no trouble to discover the \(0.09\TeV\) Z-boson.

Unlike the Higgs case, we would be genuinely uncertain about the character of these new particles for quite some time. Are they new gauge bosons? Scalar superpartners of known particles? Signs of extra dimensions of one type or another? Microstates of tiny black holes? The activity dedicated to the identification of the most sensible model would probably be intense.

We're not there yet. But the rumors – and soon after, press releases and papers – may start to be generated soon.

The 2015 data may already be a game-changer but the 2016 data should be. There are lots of particles or effects that may be invisible in 2015 but visible in 2016. But I tend to think that after 2016, the probability per year of seeing something new will drop significantly. In other words, if the LHC doesn't see new physics up to the end of 2016 (or earlier), it will probably not see it for 5 more years afterwards, either.

There was a hilarious plot in the latest The Big Bang Theory episode yesterday, one of the best episodes for some time.

You know, Amy has terminated her relationship with Sheldon some time ago. Rajesh and Howard created a website where girls solve a hard problem to get a chance to date Sheldon. Meanwhile, Amy is dating a tall British Dave. During the date, it turns out that Dave is an absolutely obsessed fan of... Sheldon. ;-) Meanwhile, Sheldon receives a pretty and supersmart winner of his contest – Analeigh Tipton (who has appeared on TBBT in the past, with Samantha Potter next to her) – a few seconds after the deadline so he tells her "bad luck".
Luboš Motl v 9:17 AM
Share