Velmenni, an Estonian startup, has tested the visible light-based replacement for Wi-Fi in the real-world conditions of an office and saw that their Li-Fi had a 100 times faster data rate than the best conventional Wi-Fi we are using today. 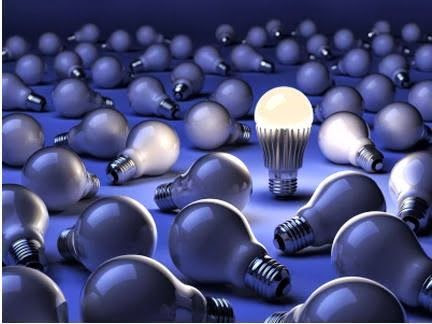 Li-Fi works much like Wi-Fi but uses the visible light instead of the radio waves. A Li-Fi receiver basically turns an ordinary LED light bulb on and off a few times each nanosecond (BTW do Czech readers know that the right translation of "nanosekunda" to English is a "c*nt on the nose"?).


The Li-Fi signal is therefore just a "scaled down" version of the Wi-Fi signal. All the times and distances are shorter. While Wi-Fi operates at frequencies such as 2.4 GHz, yellow light has the frequency around 500 THz which is 200,000 times faster.


So if you really did scale the signal in the same way, you could transmit the same information 200,000 faster than with Wi-Fi. In practice, the precise encoding of the information to the signal isn't just a scaled Wi-Fi so you get an improvement by 2 orders of magnitude only. But in doing so, Li-Fi is using a much narrower interval of frequencies, so many more independent Li-Fi fields could co-exist.

Some parts of the Li-Fi architecture are even much cheaper than Wi-Fi. However, Li-Fi has two key simple disadvantages:
While the Li-Fi signal doesn't get through the walls, it may get reflected off the white walls, so the two communicating gadgets don't have to see each other. The reflection from the wall isn't perfect and you may want to reduce the bit rate by an order of magnitude if a wall reflection is needed.

Both disadvantages make it clear that Li-Fi is probably useful "within one room" only. This may reduce the propagation of the technology.

However, I do think that the frequencies and technologies used for much of our world are suboptimal and somewhat illogical. As an example, I believe that Bluetooth is basically stupid. Bluetooth should certainly be fully superseded by a Li-Fi-based technology, right? It would be much faster and more usable. Whenever you use Bluetooth, you may guarantee that the two sides are at most a few meters from each other and they may see each other. In all those contexts, Li-Fi could be better. One could make the speed even higher by using "many LED sources in a grid", like the whole display, to transmit the information, basically like a QR code transmitted many and many times every second.

Also, things like remote controls could use the visible light. Is there a good reason why they are using the infrared light?

Also, there are still lots of wires on our desks. Most of us don't mind and we prefer wires over the need to replace batteries in our mice and keyboards, among other things. But I believe that this should be changed as well. All these gadgets should be transmitting the information and the energy wirelessly. Some radio waves would be used for the powering and the low-rate information while some Li-Fi could be exploited to transfer the information when you need lots of it.

The video embedded above shows the Microsoft Continuum technology. New phones such as Microsoft Lumia 950 may already be used as full-fledged Windows 10 computers. The information sent between the Lumia and the big screen could be Li-Fi wireless as well, couldn't it? If we don't switch to this kind of a technology, it's because we're stupid. People giving talks should basically have just their phones and they might be directly connected to the projectors, perhaps via Li-Fi.

I think that people generally wanted to use "invisible light" for the information transfer so that you don't see it. Except for night, I would actually prefer to see the light. When something is wrong with your Wi-Fi or remote control, you often want to see whether it's emitting the radiation at all. If there were a visible light coming from it, you would know something. Is the LED light bulb broken?

Lucie Bílá has used a grid of LED Li-Fi light bulbs to send a hysterical SMS message to her ex-boyfriend. ;-) OK, they were the banned Edisonian ones but I had to improve it for the caption to be intriguing.

(By the way, if you have never tried to look at the blinking light bulb of a remote control with your cell phone, you must try it. It's fun that the smartphone cameras see slightly different colors than our eyes – in particular, they are sensitive to a part of the infrared light which is why they are somewhat better for night vision.)

Because there are so many possible visible light frequencies that Li-Fi may use, Li-Fi could become the right arena for the "Internet of things". For example, thousands of products in a supermarket could co-exist and communicate on their respective frequencies. No one is tracking bread by Wi-Fi today but I do think that these technologies may become so cheap that even a bag of gummi bears will have a small antenna attached to the sticker and the carts in the supermarket will know what you placed in them etc. All those things may simplify or eliminate the work of the cashiers, security guards, and many other things.

The electromagnetic field has lots of degrees of freedom and we have only begun to exploit them.
Luboš Motl v 10:33 AM
Share