The most powerful climate alarmists among politicians – and you may find such deluded people in almost all countries of the world – have gathered for another meeting in Paris. Josh gave us a wonderful new cartoon: 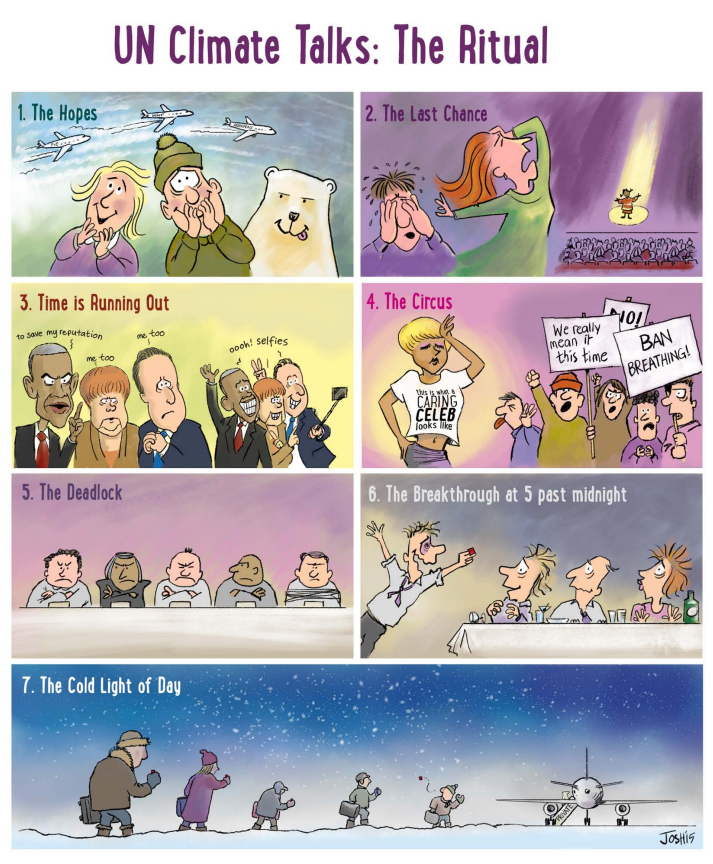 
We're getting older but the mankind is clearly not getting smarter at all. People are always told that the gathering of some mediocre officials creates a hope that may change the whole world. It is always the last chance to save the world, too. Time is running out, both when the politicians show their despair and when they are smiling on a selfie. Brain-dead activists, Hollywood celebrities, and Prince Charles are creating mess, attacking policemen, shout nonsensical slogans about bans, or destroy some heritage. The negotiators face a deadlock because no one actually wants (or is allowed to) destroy his economy – at most, every negotiator is completely ready to sacrifice the other countries' economies (a leftist is a person who is ready to sacrifice your life for his ideals) – which is what all the brain-dead people verbally defend.

It always looks like nothing would come out of the meeting at all but around 5 am on the last day or so, an agreement materializes to prepare the soil for a breakthrough and return to the negotiating tables in a year. And then all the negotiators go to the street which is cold or warm depending on the place, not time, and they fly to another corner of the world.


Every intelligent or wise person knows that this whole ritual is complete nonsense. Intelligent or wise people may differ in their estimate of the climate sensitivity – the expected warming of the globe contributed by each doubling of CO2 in the air. But regardless of the value which is not known exactly, it is spectacularly obvious that no one will rationally make the economic sacrifices justified by the tiny downward changes of the temperature.

The religious, political, or would-be moral dimension of the ritual stays pretty much the same. But at the same moment, the claims about the underlying science and the detailed "threats" keep on mutating at a significant rate. Most of the mutations have to occur because almost all the older prophesies are getting disproven. But the fight against the climate change has nothing to do with science or facts which is why the complete humiliation of all the alarmists in the past has no impact on the political power of the alarmists in the present.

Take the last number as an example. The cooling by 0.013 °C is something you can't possibly reliably detect even if the change appears abruptly, from one second to another. Even half a degree may be too little to feel. And you will have a hard time to buy a thermometer that could measure any temperature more accurately than at 0.001 °C. And now imagine that you divide this change to a whole century – and moreover, it will be a change of the chaotically changing, unpredictable temperatures on the whole Earth. People can't possibly agree what is the "temperature of the Earth" at this accuracy and even if they agree on a definition, the temperature changes by a few degrees in 12 hours, and even the daily and global averages change by 0.01 or 0.02 °C almost every day. You just wait for a day in 2100 and the whole "achievement" of the "U.S. Clean Power Plan" – something that will have measurably and harmfully affected the world's largest economy in the whole century – will evaporate or double. Two days of jocular chaos unavoidably imposed by Mother Nature already trump this century-long "struggle" by the world's economically strongest nation (at least today) whose citizens are constantly being told that their lifelong efforts will have been very important.

Or assume that the temperature gets reduced by 0.17 °C in the rest of the century. This cooling is something that world's 7 billion or so people will achieve. That's some 25 picokelvins per person – per lifetime. If you will only buy very expensive electricity and more expensive products produced with the help of unnecessarily overpriced power for the rest of your life, you will cool the world by 0.000000000025 °C. Should you do that? Is it sensible?

Philippe Verdier was fired by French TV a month ago for his lukewarm views and his new book about the climate. Thankfully, he was hired by a major TV again and is reporting from Paris about the United Nations', IPCC's, and politicians' dishonest warmist campaign that mainly serves their interests. Merci, Vovka, and eat your merde, Hollande.

People often get carried away and most of them are stupid but I am convinced that at the end, a majority of the mankind knows very well that all similar plans are complete nonsense. Even if the climate sensitivity were three times larger than the already exaggerated IPCC estimates (which would make the impact of CO2 visible in a few decades), it would still be nonsense to work on similar plans. The cooling by these nearly infinitesimal temperature changes (assigned to a nation) is negligible and has no value whatsoever. A brainwashed moron such as an actress may spend a few afternoons by installing solar panels on her roof or doing any kind of similarly futile activity. But she won't – and no sane person will – significantly reduce his or her comfort throughout the whole life just for this totally negligible goal, especially because most people think that a world cooler by 0.17 °C is a slightly worse, and not better, place to live.

People in Europe and North America have always used the term "nice weather" for the weather that is generally warmer and they had very good reasons for that description. Those reasons haven't changed.

While all sane people and people with at least average intelligence know very well that any similar plan to reduce the harmless gas is a complete insanity, politicians from the U.S., Western Europe, and many other corners of the world systematically visit these meaningless meetings and try to "fight the climate change". This fact is a sad proof that – by reelecting all sorts of Obamas and related political kitsch – similar breathtaking imbecile voters have de facto conquered the world. They are commanding us. We need to get rid of this baggage. We need to trample on these imbeciles, reduce their power, reduce their wealth, reduce their self-confidence, and probably reduce their number, too. These aggressive imbeciles, and not CO2, are what threatens the intelligent life on Earth.
Luboš Motl v 2:57 PM
Share