If I were just a little bit more certain than I am, I would add the picture below and the subtitle would say: 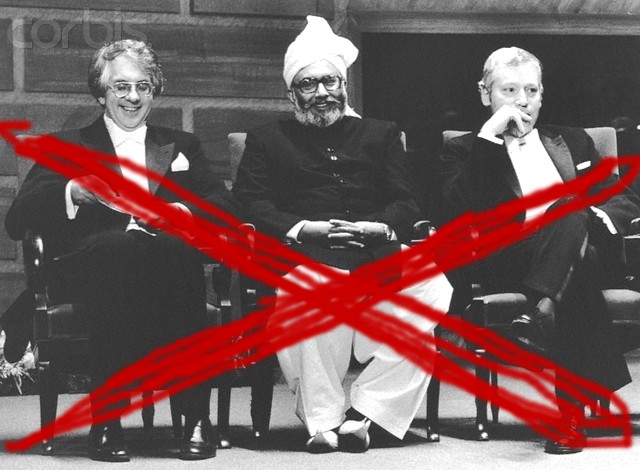 
The summary of the main 2015 results of the ATLAS and CMS collaborations at the LHC was entertaining. Many channels have been shown compatible with the Standard Model. Some searches for black holes, gluinos, sbottom squarks (deficit!), etc. have extended their limits by \(200\GeV\) or so – in one search for gluinos even close to \(1.8\TeV\). The old CMS edge at \(78.7\GeV\) anomaly as well as ATLAS' on-Z anomaly was said not to exist by CMS.

Can you see a similarity between the ATLAS and CMS diphoton charts? I chose one of the most modest CMS graphs – they had a stronger signal when they treated it differently, especially when they added the 2012 evidence, see figure 7 in the CMS diphoton paper. A reason why CMS has weaker signals is that they only build on 2.6/fb of data (75% of the time, the CMS magnet worked fine); ATLAS has processed 3.2/fb, see the ATLAS diphoton paper, too.

The \(2.9\TeV\) dilepton event could have gotten many siblings but it hasn't, so I am reclassifying the event as a "probable fluke deserved to be forgotten". Similar comments probably apply to the \(5\TeV\) dijet events etc. The situation of the \(2\TeV\) new gauge boson is somewhere in between. Such a new particle can't be "actively" excluded now. But it could have gotten some new evidence. However, it hasn't gotten any new evidence either from ATLAS or CMS.

Let me describe the right attitude differently: If we hadn't seen the intermediate data and only evaluated the "total" data we have now, which may be a sensible attitude, the excesses at \(2\TeV\) would be (and are) so small that we wouldn't talk about them at all, and that's why we should probably stop talking about them now, too.


We've got a new "pet bump", however. Within the error margins, the rumors were confirmed just like 4 years ago when we learned about the \(125\GeV\) Higgs boson for the first time. But before I get to this new "bump", I want to notice the only other interesting deviation from the Standard Model that I noticed.


In March 2015, ATLAS announced a 3-sigma excess in a search for supersymmetry,

The interesting news is that this 3-sigma excess from 2012 seems to get support from the fresh 2015 data as well, although the excess is 2.2 sigma so far only [new paper]. \(10.4\pm 2.4\) events were expected, 21 events were obtained. See how impressive the bump in the \(80\)-\(100\GeV\) bin looks.) In combination, this is getting to the 3.5-sigma realm and that's potentially interesting enough for us to look at the theory paper I mentioned or to turn on our brains.

With an optimistic world view, there's actually one more 2-sigma excess in the search for gluinos, in the six-jet hard-lepton [muon only] signal region of ATLAS. 8 instead of \(2.5\pm 0.8\) events are observed. On Figures 6a,7, this 2-sigma excess has prevented them from excluding a \(1.2\TeV\) gluino with a \(600\GeV\) LSP, a choice that I found intriguing even in the 2012 data. And even a new CMS Figure 4a shows a slight repulsion from the point (or a nearby one).

As the rumors indicated, both ATLAS and CMS have seen truly eye-catching excess in the diphoton events (events with two photons) whose invariant mass is close to... \(750\GeV\) in both cases. Needless to say, this detailed agreement between ATLAS and CMS makes the bumps far more interesting. The higher-mass, later version of the rumors was more correct than the earlier, \(700\GeV\) version of the rumor. I switched to the "\(750\GeV\) belief cult" in the morning because I saw some previous, 2012 CMS evidence in favor of this mass.

ATLAS got a big bump with the central mass value of \(747\GeV\). The significance is either 3.6 or 3.9 sigma, depending on details of the method. Needless to say, adding the most optimistic numbers, we get locally 4.9 sigma from the ATLAS+CMS combo. I think it's still fair to say that the ATLAS+CMS combination remains close to 4.5 sigma if we take the look-elsewhere effect into account. It's damn close to the discovery.

Just to be sure, in the same diphoton channel, ATLAS also saw a 2.5-sigma local bump near \(1.6\TeV\); CMS seems to produce negligible deviations over there. On the contrary, CMS has a less-than-two-sigma excess around \(1.15\TeV\); ATLAS sees basically nothing there. And CMS also saw some more-than-two-sigma excess around \(580\GeV\); no confirmation from ATLAS over there. That's why I will only talk about the \(750\GeV\) hints seriously at this moment.

The situation is less clear than 4 years ago when the first Higgs boson had to exist, for the electroweak theory to be consistent (unitary), and all other places for that God particle to hide had been excluded. So it had to be there and 3 sigma was really enough to be basically certain.

What theory describes the boson

Now, there is no equally unavoidable reason for a new particle – which would probably be a new scalar particle and we could even say a "new Higgs boson". The Standard Model works pretty well with one God particle – much like many religions are satisfied with one God. But the correct theory of physics may still require two or, more precisely, five God particles in total. ;-) The minimum supersymmetric models such as the MSSM predict five physical Higgs bosons – two charged (antiparticles of one another) and three neutral ones (which includes one CP-odd boson).

For some time, I have considered NMSSM – the next-to-minimal supersymmetric standard model – to be more natural than the MSSM. It has some extra scalar particles. And it's probably (even) easier to reconcile the new particle (if it is real) with the NMSSM than with MSSM.

But completely different models may be the right ones to describe the new particle. Maybe some "two Higgs doublets" theories with no SUSY or something else. I should also remind you that \(750\GeV\) would be close to the upper bound for the (only) Standard Model boson if it were the "main" one. So four years ago, it would be viewed as the "almost maximum" value of the Higgs mass. But if there are at least two Higgs bosons, the situation is more flexible.

The end of the Standard Model epoch? A bet.

We've often heard that the Standard Model represents the end of particle physics. It's a theory to be here for the eternity, new physics and BSM physics is religion, and so on. I am willing to bet against this common wisdom – and bet that this new \(750\GeV\) boson will be confirmed. I feel fairly convinced that this is possible but I still want you to offer me 10-to-1 odds if you want to become a Standard Model advocate.

The rules of the bet:


If the first released diphoton paper of either collaboration evaluating at least \(20\) inverse femtobarns of data at the energy of at least \(13\TeV\) that reaches at least up to masses of \(800\GeV\) contains no discovery of a particle whose (mean value of) mass is in the \(720\)-\(780\GeV\) window, I will pay you the money. If such a discovery takes place, you will pay to me.


Sounds good? If there's some interest, we can turn it into the largest bet in the history of physics. You know, I want the 10-to-1 odds because my claim is basically that all the "Standard Model forever" worshipers are imbeciles while Glashow, Salam, Weinberg, Gross, Wilczek, Politzer, and others were sloppy physicists. ;-)

There are other reasons to keep some doubts about the particle (and reasons for me to demand better odds). While ATLAS would like the width to be some \(45\GeV\), because the excess appears in four adjacent bins, CMS could imagine the width at \(10\GeV\) – but that could be a coincidence for CMS to get the events too close to each other and ATLAS to get them far from each other. Figure 3 in the ATLAS diphoton paper shows the excess as both tall and wide. It is worrisome – ATLAS does seem to have some nontrivial evidence supporting a greater width.

The scalar-photon-photon coupling from a loop

Adam Falkowski wrote a helpful text. As a former boyfriend of SUSY's who would lose $10,000 if SUSY were discovered, he prefers to give you "simpler" models. Instead of all the extra Higgs doublets and superpartners, he wants you do add a scalar \(S\) in the Standard Model. Well, you also need some new heavy "quarks" (the light ordinary ones are probably not good enough; we probably need the vector-like new quarks i.e. particles that don't break the left-right symmetry at all) that are coupled to the electric charge and maybe also the color.

Then, you generate the cubic interaction capable of the \(S\to \gamma\gamma\) or \(S\to g g\) decay (two photons or two gluons) via a one-loop diagram with the new "quarks" running in the triangular loop. The effective dimension-5 interactions will be\[

\] with some new vev \(\langle S\rangle = v\), if I understood the symbol well. We need the interaction of \(S\) with the 2 photons for the final diphoton state to emerge from \(S\); but we also need the analogous interaction with two gluons because that's how \(S\) is supposedly created from the initial state, \(gg\) inside \(pp\). But you see that he probably needs something like new vector-like "quarks" aside from \(S\), too. Who ordered that, you would ask? Supersymmetric models give some deep reason to exist (a deep one, not just an explanation of some bizarre bumps) to all the new players.

There is a difference between fixing problems with your Lagrangians ad hoc, whenever they break down in Switzerland, and maintaining a big picture of physics where many observations have some purpose and you try to learn some deeper lessons. I and top-down theorists choose the latter. Adam Falkowski prefers the former and one may survive in this way.

But is this type of physics valuable when you never make important and new enough predictions about anything that should happen in the future? You just predict the mosquitos flying around you (according to the established model) while you say "I won't be hit by a stone" up to the moment when you're hit by a stone and when you start to say "I won't be hit by a rock". People like me want to understand not only the mosquitos but also the stones and perhaps rocks as soon as possible – all these stones, rocks, and also asteroids, are parts of physics whether we're colliding with them today or not!

Before 6 pm tonight, the last nuclei orbited the ring before the beams were shut down for 2015. So the gadgets will finally enjoy a silent night tonight. They deserve it and they must relax before much more work they're expected to do in 2016.
Luboš Motl v 5:44 PM
Share