We are waiting for the tomorrow's CMS and ATLAS talks about the potentially major LHC results in 2015. Heuer has already entered the room, with a full knowledge of the presented data.

But before we see how generous Nature and the experimenters have been, we may already look at some news. Those of us who try to know papers before they get to the arXiv ;-) have known this paper for two days or so. Now, everyone may see


whose money graph seems a bit more exciting than the average LHC graph – one that shouts that the Standard Model is probably infallible. 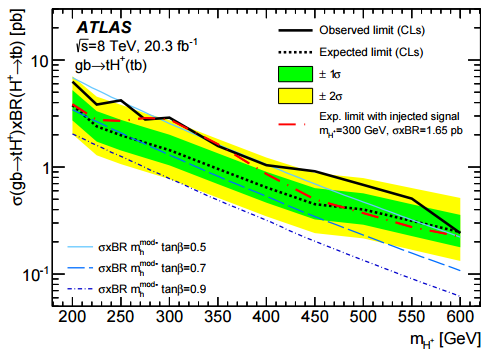 \] there is an excess comparable to 2 sigma (locally). The different values of the masses are not quite independent of each other, especially the nearby ones are not. So you can't really combine the excesses to a "huge" deviation from the Standard Model. But some of the regions in the graph are mostly independent.


Just to be sure, the dotted black line is the expected upper bound on the cross section of\[

\] times the branching ratio \(H^+\to tb\). But ATLAS got the solid black line instead. If there were a \(300\GeV\) charged Higgs boson, the expected upper limit would be given by the dashed red line which differs from the dotted black line between \(200\) and \(400\GeV\), especially near \(300\GeV\) where the excess would be about 2 sigma.

But there could be a potential relationship between the charged Higgs excess here; and the diphoton bump at \(700\) or \(750\GeV\) to be reported tomorrow. If these new Higgses had similar apparent masses, the story would be more convincing because the supersymmetric models often predict that the masses of new charged and neutral Higgses are very close to each other. A charged Higgs at \(500\GeV\) or less along with a neutral Higgs at \(700\GeV\) doesn't look terribly natural to me – but I am not a real phenomenologist who has traveled to 50 corners of the MSSM parameter space.

Incidentally, the value of the diphoton bump mass \(750\GeV\) that began to appear in recent hours would be more promising than \(700\GeV\) for one reason: CMS has seen a very modest 2-sigma excess at this mass in 2012.

By the way, when we are talking about rumors and gossip, I can't resist to mention that the song "Pissed Off / Conceited" by Ms Barbora Poláková, an actress, is currently the most played Czech song on the Czech radios (and the video above stands at 7.5 million views now). It's enough for an out-of-tune parody, Gowed Up, to stand at 400k views and the Chipmunk edition to approach 100k. And remakes emerge all the time.

I really love music of almost all genres and types – from classical music to pop, hip hip, techno, children's songs, whatever – but this song is an example of something that just annoys me. The (jealous) women in the song spread (negative) rumors about another woman (who is swollen-headed, ironic, problematic, egotist, and can't cook well etc.), and so on. A stellar combination of self-confidence, mediocre music skills, and some kind of jerkiness that is probably widespread (not only) among a larger percentage of Czech women than what would be ideal. This song could be picked as an explanation for foreigners why they shouldn't date Czech women.

But I must admit that now, when I am listening to it for the 5th time, it's already better and kind of catchy. :-)

The theme of the fake friendship between these typical average women is the same as in Dáša Nováková [revised audio here] by Mládek recorded 40 years ago. One of the "heroes" of that song is Ms Poláková as well. (He picked some of the most frequent Czech female surnames and this is one – Polák means a Polish man.)
Luboš Motl v 11:23 AM
Share