Miloš Zeman: the migrants should have taken up arms instead

Jump to the migration topic; a copy of the 14-minute video. TRF doesn't endorse the bulk of the economic remarks in the speech below. 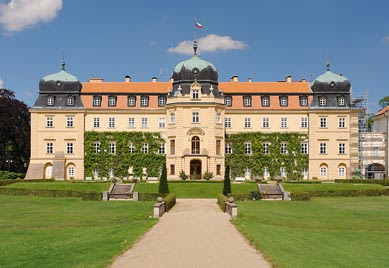 The Lány [Vast Fields] Chateaux, the presidential palace from which he spoke.

after another year, we're meeting to collectively meditate about the events that have taken place in this year. Just like in our individual lives, the republic also goes through joyful events as well as the less joyful events. But I am very happy that the joyful ones significantly dominate.


I will begin with the first one. With the exception of Malta, the Czech Republic is the #1 country in the European Union when it comes to the GDP growth. It is a big success and I would like to thank our employees, our employers, and I would also like to appreciate the Czech government for its economic policies.

The second good news is that according to our statisticians, the average monthly wage has increased by $40. It's nice when the economic growth is accompanied by the growth of the living standards. After all, this applies to our old-age pensioners who will enjoy the humble increase by $1.60 a month in the next year but in 2017, they should gain the extra $12 a month – one-third of the growth of the average income, not counting inflation. I would only wish that this increase will be added to everyone so that the wealth gap between the old-pensioners and new-pensioners doesn't grow.

And the last good news has something to do with the unemployment. We're the #2 country in the European Union after Germany who has the lowest unemployment rate. Because the available jobs have been added as well, I believe that those who really want to work will find a job. But that's not the case of those who are refusing to work without serious health reasons. While I support some increase of the minimum salary, I disagree with the increases of the unemployment support fees because I believe that the scissors opening up in between the minimum salary and the unemployment support should be motivating people to do useful – and, in the future, also well-paid – work. Moreover, some welfare payments are totally nonsensical. For example, the state's contribution to living expenses has only created hostels and the business with poverty.

To summarize, we can say that the lousy mood [a term by Havel] is over. There is a reason for careful and critical optimism, for positive expectations that is an important positive factor driving the economic growth. And there is also a reason for all of us to smile at each other, just like I will smile at you now – this way [5:03] – because with the smile, everything is easier.

I am sometimes criticized that my Christmas addresses don't talk about the visions for the Czech Republic. Even though I have written several books and made several speeches on that topic, one of which was in the Parliament, but I will happily briefly outline my vision for the Czech Republic again. It is a vision based on the gradual convergence of our country closer towards the Scandinavian model of the welfare state i.e. a model based on two pillars. High taxes – which are very unpopular – and especially the progressive taxation of the physical persons' income tax which makes the wealthiest people pay the highest taxes, even relatively speaking; and on the assumption that the tax revenue isn't stolen but invested into the people, the public sector which means the healthcare and education system as well as the scientific research and development. Scandinavian country are often at the top of the competitiveness rankings which disproves the invalidity of the neoliberal, right-wing thesis that the higher taxes a country has, the lower the economic output [bullšit]. Moreover, these countries have the highest index of the quality of the human life including the life expectancy, low crime rate, and so on.

So this is my vision. But I fully admit that to achieve it, we must first fill the holes in the government budget that is leaking huge billions through the tax frauds. Therefore, I will support all laws fighting the tax frauds, whether it's the law about the electronic supervision of payments [a monster communist-secret-agency-styled scheme allowing Babiš to monitor each penny transferred by his competition] or the bill requiring to prove the origin of income and assets. Those who say that the private freedoms of the people is assaulted by these laws are forgetting that no one has the right to steal, to cheat, and the tax fraud is the second most serious crime after a murder in the U.S.

The economic diplomacy endorsed by the current government as well as myself has recorded significant successes in 2015. I am happy that our economic relationships with China have improved – the country is turning into the largest world's economy. I am happy that we are also receiving investments from the Republic of Korea and numerous other countries. That we have managed to improve the relationships with the Central Asian countries because we're receiving a significant fraction of our oil from them, and so on.

So there is just one black spot in our foreign policy issues. It's the migration wave.

Politicians who are closing their eyes and argue that this migration wave hasn't poured to our country yet and that we have no reason to worry remind me of a certain former mayor of Prague. During the [big 2002] floods, he was standing on the bridge and saying: "The situation is exceedingly wonderful." And two hours later, water has filled the Prague Subway. Sometimes I feel like Cassandra who is warning against the dragging of the Trojan Horse into the city.

But I am deeply convinced that what we are facing is an organized invasion rather than a spontaneous motion of refugees. Those who are defending migrants are referring to the compassion and solidarity. Compassion is possible with the old people, sick people, and especially with the children. But the overwhelming majority of the illegal migrants consists of young and healthy men without families. And I am asking: Why don't these man take up arms and why don't they fight for the freedom of their country against the Islamic State? Their fleeing is objectively strengthening the Islamic State.

And the same thing holds for those escaping countries which are not fighting because their departure sentences their country to new underdevelopment.

When the November 17th rally of the champions of the migration was getting ready, one of our intelligence services shared the information with me that has described the content of a planned banner: "This country is not ours, refugees welcome [these two words in English]." Afterwards, someone advised the organizers that the text was extraordinarily stupid so they have replaced it with a somewhat less stupid sentence: "This country belongs to everyone, refugees welcome."

At the end of my Christmas address, I want to tell you two clear sentences: This country is ours. And this country isn't and even cannot be for everyone.