Eve, a woman, was created out of Adam's penile bone

Ziony Zevit, a professor at the American Jewish University, has finally fixed a mistake that has made Judaism and Christianity more illogical and less intriguing than necessary in the recent 2,000 years. Eve was created out of Adam's baculum, the penile bone, he figured out. 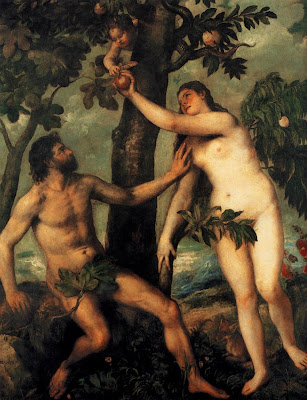 The Book of Genesis, a pillar of both religions, was written in Hebrew some 500 years before Christ. In Genesis 2, God created a man named Adam out of dust, along with a luxurious garden somewhere in Iraq [or Armenia or Azerbaijan] for Adam to enjoy.


Adam could have been lonely so there was a fix:


The Lord God said, “It is not good for the man to be alone. I will make a helper suitable for him.”

But for Adam [f] no suitable helper was found. [21] So the Lord God caused the man to fall into a deep sleep; and while he was sleeping, he took one of the man’s ribs [g] and then closed up the place with flesh. [22] Then the Lord God made a woman from the rib [h] he had taken out of the man, and he brought her to the man.

“This is now bone of my bones
and flesh of my flesh;
she shall be called ‘woman,’
for she was taken out of man.”

[24] That is why a man leaves his father and mother and is united to his wife, and they become one flesh.

[25] Adam and his wife were both naked, and they felt no shame.


It makes sense. A woman is called in this way because it's a derivative of a man. It's made out of a rib, so a more accurate term for a woman would be a worib. The only problem is that there is no missing rib in the male body.


The Hebrew word for a "rib" is "tsela" (צְלָעֹת). At least the Jews have thought for a very long time that "tsela" means a "rib". Except that in dozens of other contexts in the Bible, the word "tsela" is translated as a "limb", something that is transversely attached to the main body (an "appendage" or a "side").

To make the story short, the actual meaning of the "rib" should be the "bone of the bones", the most important bone that Adam has sacrificed. What bone was that? It was his baculum or a penile bone, Zevit pointed out. The Jews have believed a myth for 2,000 years – that "tsela" may also mean a "rib". It never could. Instead, it is the penile bone. The Biblical Hebrew has no known word for the male organ.

Probably due to the shortage of homosexual sex with other mammals ;-), I honestly didn't realize that almost all mammals have this bone that evolved to simplify the penetration. Male humans must do without it, however: a purely hydraulic solution was found satisfactory enough. The spider monkey and the woolly monkey are the only other primate species that manage to live without a baculum.

All of this is very amusing. I don't really believe that a human was created out of dust – without a pre-existing evolution. On the other hand, the absence of the baculum is an interesting observation that deserves an explanation, I believe. Those of us who don't literally believe the Bible may still ask a sensible question: What did the writer of the Bible actually mean to say? I do tend to think that the "penile bone" is more likely to be correct than a "rib".

My refinement of Zevit's story that is more compatible with science goes as follows.

The Earth has been a garden managed by some extraterrestrial living forms which our ancestors nicknamed "God". Our main E.T., the "Lord", began to create some genetically modified monkeys on his terrestrial garden after a galactic ban on GMO was lifted. The first genetically modified monkey, Adam, wanted his female counterpart to be attractive. He specifically wanted round boobs and the lack of body hair.


on an unspecified chromosome, Adam's desires may be fulfilled. However, the genetic modification has a side effect: the males lose the penile bone. The Lord wanted to be sure that the new form of life is viable so after he anesthetized Adam (as the Bible explicitly says), he removed the bone from Adam's body, too.

The Lord created the woman out of the bone and Adam seemed satisfied. Eve made him so excited that he didn't really need the baculum anymore. The Lord realized that the deal was a good one. Finally, the feminists may feel vindicated. The right word for a woman shouldn't be a woman or a womyn, it should be a wodick. I am sure that this term will get popular among the fifth wave feminists.

More seriously, I do find it plausible that some aspects of the Book of Genesis and other writings were found scandalous enough so that they were reinterpreted in terms of ribs etc. This is the same kind of a "modification of the meaning" that we employ when we have to explain some sensitive or obscene comments to the kids, too.

The author of the Genesis – it was probably someone else than Moses – meant something juicy but his followers found it "too juicy" which is why the Judaists and Christians had to be satisfied with a rib. They got so used to it that many of them were offended when Zevit presented his alternative theory. But how much sure you may actually be that Zevit is wrong? Shouldn't you avoid these anxious reactions to theories just because they disagree with some details you were taught when you were a kid?

BTW I am a bit surprised why this story got revived. At least in 2010, we could read about the same theory.
Luboš Motl v 10:13 AM
Share