First batch of 10 pheno papers on the new resonance \(S\)

Note that we have democratically decided about the right symbol

The CERN seminar took place between 3 pm and 5 pm CERN time (2 pm-4 pm Greenwich Mean Time). After the end of the seminar, phenomenologists had 5 extra hours before the daily arXiv.org deadline at 10 pm CERN time (4 pm Boston time, 1 pm California time) to absorb the totally surprising news, do the research, calculate and verify all the equations, write a \(\rm\LaTeX\) paper, fill in the forms at their departments when necessary, and submit their new paper. 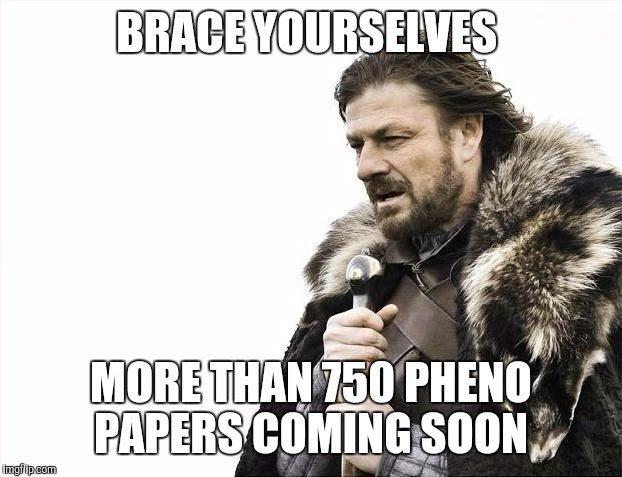 It was a hard task because it normally takes weeks or months to write a paper. But ten groups of authors have managed to succeed – and I am not counting the hookion paper. Among the 29 new hep-ph papers, ten of them talk about the possible new boson at \(750\GeV\):


The first paper, 15, was posted at 5:48 pm CERN time, about an hour after the end of the seminar; the last one was submitted 43 seconds before the deadline. Note that all 7 last hep-ph papers (23-29) were about the new resonance. ;-) If the phenomenologists continued to write over 2 papers an hour (48 per day), it would take just 16 days for them to reach the magic threshold of 750 papers. They will probably slow down!


Just to be sure, my comments that the phenomenologists were fast were meant as a joke. I am confident that every single author of the fresh hep-ph papers on the resonance was familiar with the "rumor" for quite some time. He was not only familiar with the rumor. He was already typing the paper using the information that he officially didn't know.

The yesterday's TRF report was filled with too much information mainly because I wanted to mention the results of roughly 30+ other new ATLAS and CMS papers. Here, we may focus on the \(750\GeV\) resonance.


So what it is? It may be a fluctuation, a pair of accidents. We have observed many 4-sigma excesses – and even some 4-sigma LHC diphoton excesses – go away in the past. If that is the right explanation, there isn't much more to say. The excess will go away but new fluctuations will emerge at other random places in the future. Statistics happens.

Let's assume there is a new resonance

First, what is the spin of \(S\)? It can decay to two photons – an even number of fermions (zero) – so it can't be a fermion. It is a boson. The spin is integer, \(j\in \ZZ\). The reasonable choices in elementary particle physics are\[

So the massive graviton with \(750\GeV\) seems nearly impossible and so far, I haven't seen any paper that would claim to make this explanation viable. But it's conceivable that a playful phenomenologist will find a loophole and write a paper about a \(750\GeV\) massive graviton, too. That paper will probably be wrong and the loophole will be spurious but people will disagree about this claim.

Then the particle could have \(j=1\). It should be a massive gauge boson, like the \(Z\)-boson. Because it's just similar to \(Z\), we would call it \(Z'\)-boson. But assuming some standard enough couplings, those are excluded up to \(3\TeV\) because the interactions of gauge bosons are typically rather strong – dictated by the charges and those can't be "infinitesimal" in the natural units. More seriously, as PJ has reminded me, the Landau-Yang theorem bans a decay of \(j=1\) particle into two photons.

An inspiration for TRF readers who are numerologists. The new particle is a bound state of 6 Higgs bosons (vertices of the octahedron) because \(6\times 125\GeV=750\GeV\). Write a viXra paper about it! ;-)

It's probably a scalar

Up to December 2011, experimenters hadn't detected any elementary scalar particle at all. But from 2011-2012, they could have become the norm. The old \(125\GeV\) Higgs boson was first found in the diphoton channel as well and we may be witnessing just a repetition of the same events. Except that the \(750\GeV\) beast doesn't seem essential for anything we know – at least not for anything that is directly empirically accessible to our understanding (SUSY is also "needed" but I don't count it here).

There's one unlikely but, for some people interesting, adjective. The new boson – and even the old one – may be a composite particle that is composed of other things. This is discussed in the first paper, the Japanese [15]. I can't find a motivation to take this possibility seriously. It should be very unlikely to create composite particles – you need to create several particles at the same moment etc. And even if you succeed, you should ask why you haven't seen the components.

Our new hero and dark matter

Is the new particle \(S\) good for anything? The dark matter isn't explained by the Standard Model. So it would be nice if \(S\) didn't stay unemployed but if it helped to clarify the composition of dark matter. The particle can't be dark matter itself because dark matter must be long-lived and this \(S\) decays to two photons before it leaves the pipe. But as the French-Belgian paper [21] suggests, \(S\) could be able to decay to dark matter particles, a new ad hoc massive Dirac fermion \(\psi\) of mass \(300\GeV\).

The paper [28] as well as paper [20] largely agrees. (It also says that Run 1 and Run 2 become even more compatible if there's some even heavier particle involved in Run 2 events.) Dark matter may be created from that \(S\). Moreover, these folks argue that \(S\) is likely to belong to a new strongly interacting sector – largely because the width of this particle seems to be rather large (especially according to ATLAS).

In a footnote, they also discuss supersymmetric explanations of the resonance and say that \(S\) may be the new singlet from the NMSSM – which is tantalizingly called \(S\) as well; or a heavier MSSM Higgs boson assuming a large \(\tan\beta\). It may even be a sneutrino that may decay to two bottom quarks if R-parity is violated. This unusual possibility would mean that the LHC will discover an actual superpartner in 2016!

I am sure that many detailed SUSY models of the particle will appear in coming days and weeks. Today, aside from the footnote in [28], the MSSM is discussed marginally by [26] and [29], along with technicolor and other models, and these two papers conclude that the MSSM can't simultaneously make the diphoton width as well as \(m_h=125\GeV\) large enough so extensions of the MSSM are needed.

The paper [23] argues that the minimum two-Higgs-doublet model doesn't work. The point that the particle interacts through a new strong interaction seems to be shared by other early authors.

Numerous papers try to stress that the particle \(S\) cannot be alone. The need for other particles is promoted to one of the points of the paper [25]. They also discuss various other possibilities – loops of messenger fermions, edge configurations, and hidden valleys.

The paper [27] wants to call the new particle a heavy axion. Apostolos, the author, should get a chocolate from Frank Wilczek who tweeted numerous religiously excited tweets about axions yesterday. And the paper [24] says that \(S\) is a pseudo-Nambu-Goldstone boson related to an anomaly.

Several papers agree that the properties of \(S\) become more natural if the particle interacts with new fermions. And those fermions should better be left-right-symmetric (vector-like) and not chiral like the leptons and quarks in the Standard Model because otherwise these new particles would predict unobserved yet strong corrections to the electroweak theory as we knew it. Many authors will agree with Falkowski etc. that the decay to two photons occurs through a fermionic triangular loop. (You can't have renormalizable couplings of an electrically neutral particle to photons.) You draw a triangle with a new fermion and attach two photons and \(S\) at the vertices. New vector-like fermions have been promoted by many groups of model builders including string phenomenologists so we may hear about some variations with a new scalar particle soon.

You see that the diversity of the explanations is huge – it's a landscape of possibilities. Whether you like it or not, whenever certain things are uncertain, the possible answers are diverse. String theory's landscape reflects the same principle in another, more consistent and more constrained, formalism. And the purpose of this new particle is simply mysterious at this moment.

It seems very likely that the new particle is a \(j=0\) scalar particle. And it seems guaranteed that it can't be the only new particle that has to be added relatively to the Standard Model. But who are the friends of \(S\) and what is their relationship and purpose? Nobody knows. If this extra knowledge about the particle emerges, we may start to call it a heavy axion, a technicolor or composite scalar, a pseudo-Nambu-Goldstone boson, or – which I find more likely – a new Higgs boson analogous to the (three-year) old one.
Luboš Motl v 8:58 AM
Share