Greece has recalled ambassador from Prague

Greece has recalled its ambassador in Prague for consultations (but most likely, they meant consumations, something that Greek public employees are better at) in the wake of "unacceptable" statements by Czech President Miloš Zeman. Last Tuesday, Zeman has said (to some Slovak media, TASR) that he was disappointed that Greece didn't leave the eurozone in the summer. 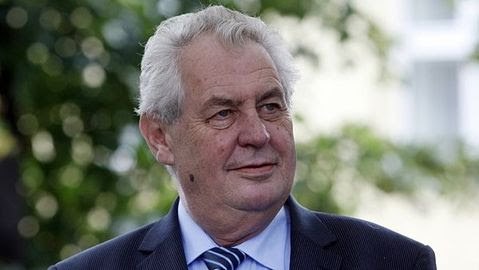 He added that the Czech Republic will start the process of accession to the Eurozone a day after Greece leaves it. In the first reaction, the Greek ministry of foreign affairs entertained the listeners by saying that "Czechia is an EU member thanks to Greece".


Greece has joined a prestigious club of countries that have recalled its ambassadors in the past (or vice versa), including North Korea (1993: a diplomatic conflict without a clear topic), Iran (1998: Radio Free Europe), Belarus (2002: Lukashenko wasn't allowed to NATO summit), Belarus reverse (2005: claimed violation of laws), Serbia (2008: Czech government – painfully – recognized Kosovo), Canada reverse (2009: protest against reintroduction of visas for CZ tourists).

You know, what Zeman said isn't an insult. It's a transparent expression of our (or any sane nation's) common-sense policy. We really won't join a currency zone which is used as the Greece's cash cow. Also, President Zeman has already stressed that he won't change his mind about this question and implicitly indicated that he will welcome when the diplomatic relationships between the two countries will be terminated. His spokesman expressed surprise that the ineffective Greek bureaucracy needed 1 week to notice Zeman's statements and react to them.

Here are some top upvoted comments by Czech readers of a center-right server. (The replies at left-wing servers (especially novinky.cz) are analogous. The post-dissident, quasi-intellectual daily lidovky.cz has a much higher fraction of anti-Zeman comments, however.)

In order to protest against Zeman's statements, Greece should leave the eurozone. [thumb up]

So comrades in Greece are unable to protect the Schengen border, they can't fix their finances, they keep on demanding assorted loans... But when someone says the truth, they behave as a lovelorn female lover... I would vomit...

Is Greece upset that we don't want to become Greece's cash cow?

Greece which would go bankrupt without the support by the EU and that isn't protecting the border of the Schengen area, is protesting. Greece should start with itself and only afterwards, it should be solving other nations' problems.

But he [Zeman] is right. As long as Greece is a member, a country that got in fraudulently and that is dragging the euro to the bottom of the sea, it makes no sense to join the area.

Given the fact that refugees are currently the #1 product exported by Greece, I hope that they will impose economic sanctions against us.

A loss of a Greek diplomat? That will destroy us completely. Economic dark ages will begin. :-) :-D

Yeah yeah, because of the truth, people are ready to fight. He [Zeman] only loudly said what the rest of Europe thinks about them. [thumb up] [Czech flag]

Novinky.cz [left-wing server]: "Recalling the ambassador doesn't mean his removal from the host country. However, the step is a visible signal of a given country towards the host country that there exists a serious problem that must be solved."

Maybe Greece plans to pay all of its debts and solve the problem.

I am really not a Zeman fan, he is a bumpkin according to my views, but it would be silly to pretend that I am annoyed even about matters where he is right, like many people over here.

Zeman has lots of vices but he is right in this issue.

Greece is the Achilles heel of the European Union. Cowardliness, arrogance, and dishonesty of their behavior is screaming to the heaven. A nation of 10 million has wasted 300 billion euros in seven years. It's incredible.

Oh, that's a tragedy... especially for the ambassador. :-D

Summertime in Prague was cool for Elli Paspala but it's been enough.

For a long time, Greece shouldn't have been there, their exit is better both for them and for other countries paying with the euros.

I don't like saying that Zeman is right but he is.

The Greeks may get offended as much as they want. Zeman has basically said nothing. Greece represents at least two objective problems: unsolvably excessive debt and violations of the Maastricht rules, and the failure to protect the external border of the Schengen area.

Zeman has the recht [he is right]. Does it make any sense to adopt the currency of a union whose member is violating the agreed upon principles of the monetary policies of the whole group?

He is right just like he was right about the "refugees", before they were called the migrants, or when it wasn't allowed to call them in this way.

The fact that Zeman says something doesn't necessarily mean that the proposition is rubbish.

We must appreciate Greeks about one thing – they're deeply in the manure, up to their neck, but they are proud about their manure. Be free to putrefy in the manure, including your ambassador.

It remains a fact that Greece was and remains in the state of bankruptcy. Instead of fulfilling its duties in the protection of Schengen, it keeps on transferring the refugees further to Europe. So according to all the rules and treaties, it has no business of staying in the European Union.

The further from the Greeks and Greece, the better. [thumb up]

His statement is completely alright. So once again, very good, Mr President. [thumb up]

I see nothing wrong about our president's statement.

Again [Czech flag] a journalistic Christmas duck!! Greece has only recalled the ambassador for consultations, you know!! [Angry face]!!

Only one idea came to my mind: I hope that they won't sh** into their pants with all the anger, and I am saying it even though I dislike Zeman. Haven't they been blackmailing others with the same thing (exit)? They're like kids in the kindergarten, really. And one may say it not only about the Greeks but also about a large majority of the world's politicians.

Just like Zeman isn't otherwise my cup of tea, he is right on this issue. To join a club with a permanent bankrupter is something that only a moron would do.

And feel free to keep your Mr Ambassador, he won't be missed.