Some pre-Christmas insanity at a university I've worked for

Gordon has sent me links to two stories that are rather incredible. First, after some 400 years or so when students living in the dormitories had house masters, house masters will be banned. The word sounds like slaveowners so it must be prohibited. Don't these people feel shameful and concerned while eliminating traditions and terminology that has worked flawlessly throughout the post-enlightenment epoch? Aren't they worried about the hard-to-overlook similarities between their movement and the "reforms" that the Nazis and the communists have introduced? 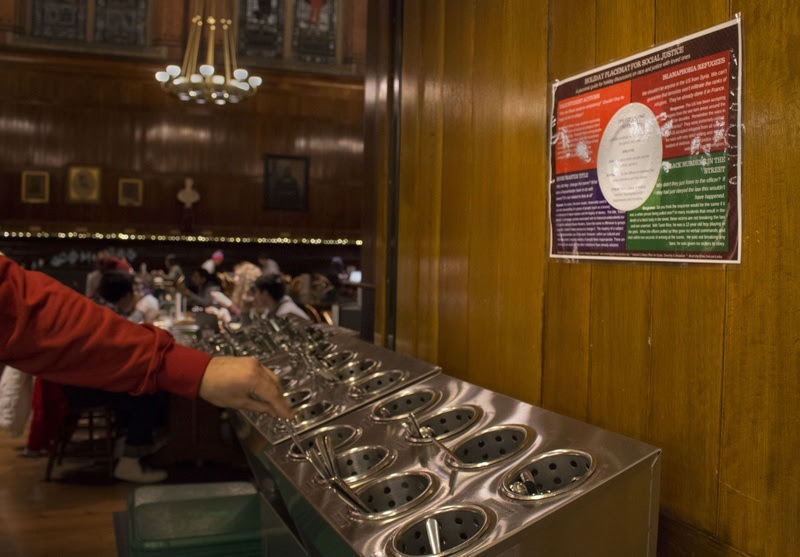 But this story is just a cosmetic detail relatively to the following one. After all, it doesn't have any influence on important things whether you're called a "house master" or a "building's age-challenged fellow dickhead".


The second story is that the "Office for Equity, Diversity, and Inclusion" at Harvard University (the very fact that something like that exists sounds absolutely Orwellian; the main web page of their server contains a web form at which students may report a conservative or a similarly politically incorrrect violator) has spread


the holiday placemats for social justice


whose officially declared (!) purpose is to instruct freshmen "how they should talk about racial issues during the holiday break at home". The students have not only been constrained by speech codes. They are expected to follow speech codes written down by Harvard's thought police when they are talking to their families at home, too!


The "placemat" contains some typos ("reponse" and "Islamaphobia") so it is pretty clear that it was created by an activist who is mostly an idiot, too. The precise author isn't known. (The poster was basically copied from one by a group named Showing Up For Racial Justice.) The ultimate responsibility probably belongs to the dean of the Harvard College Rakesh Khurana (born in India). But the content is just scary.

First, there are some funny verbs on the "white plate" at the center of the "placemat". When asked about social questions, the freshmen are urged to "breath". Without this recommendation, elite 18-year-old people who got to Harvard would surely become breathless and suffocate as soon as someone asks them about a social issue. But aside from breathing, they must also speak politically correctly. The four additional verbs are "listen, ask, affirm, speak" and they the accompanying sentences describe some cheap recipes how to become an effective demagogue who can manipulate his parents or siblings; it's easy to check that most left-wing debaters use all of them because most of them have probably gone through such a Goebbelsian training in demagogy in the past. The social justice wars have become a huge organized industry.

And then there are the "right" answers to four racial or social topics.

When parents or someone else asks whether the blacks should be happy that they're in the college (e.g. those who were recently angry at Yale), the freshman is obliged to say that the blacks are just courageously describing racism on campus and they're not complaining. And blacks must be given the same rights as non-blacks (which, the sentence implicitly says, they are surely not).

When someone says that the Syrian refugees are dangerous because they also include terrorists, as in France, the freshman has to say that the U.S. is all about accepting everyone, especially violent refugees from Central America in the past, and racially "just" people are obliged to welcome Syrian refugees.

If a relative suggests that the blacks should have interacted more carefully with the cops in the street, the freshman is obliged to say that such a comment is only said about the blacks, not whites (which is bullšit because whites sometimes get shot down as well, just less frequently – the quantitative difference is due to the blacks' acting more dangerously in the average situations). The freshman is also asked to memorize and cherry-pick cases when the blacks weren't (supposedly) breaking any law and hide all the opposite cases.

This is just stunning. Harvard has created an office whose overt goal is the total intimidation and indoctrination of the most sensitive students, the freshmen. The goal isn't just to "make the students behave politically correctly" on campus. They must do so outside the campus as well and the "office for diversity" basically works hard to control and constrain the students' relatives as well! As far as I can say, the people in those offices should get several years in prison for this outrageous bullying.

But as I always stress, the fear of these nasty people is almost always hugely exaggerated. There have been lots of shocked reactions in the media – and, thankfully, a protest by the representatives in the Harvard Undergraduate Council, not to mention a parody of the placemat by the Harvard Republicans [Twitter, image]. As a result, two deans have apologized for the placemat. Dean of student life and dean of freshmen have "sincerely apologized", wrote that these topics are complex, academic freedom remains central, and the suggestion that there is only one viewpoint on these matters "runs counter to our educational goals". The deans appreciate the feedback from those who have pointed out that the "office for diversity" members should be hanged by their balls.

You can see that there must be some genuine battles going on behind the scenes. There are deans who are ready to sincerely apologize for similar Orwellian campaigns; but you also have tons of powerful aßholes at Harvard who keep on organizing them. This battle may be taking place behind the scenes but it is an important one. You may be sure that if Harvard won't be able to eliminate the aggressive PC aßholes, it will be turning into a pile of cr*p rather abruptly.

Placemats demanding "the only allowed [and the most extreme] answers" to all controversial social and political questions from all the freshmen just can't be tolerated at better schools even in mostly non-democratic countries, let alone at the top schools in the United States. Dear Americans, the Harvard "office for diversity", and not Mubarak's or Assad's office, is what you should bomb.
Luboš Motl v 8:02 AM
Share