I would bet: Sydney climate skeptic is the father of the Bitcoin

Update: Motherboard claims that some PGP keys were backdated which would indicate deliberate deception in the evidence. I can't verify either claims.

Hours ago, Wired and Gizmodo published nontrivial evidence (Gizmodo goes well beyond Wired) indicating that an unknown Sydney-based genius named Craig Steven Wright (*1970) is the person (or the boss of the persons) behind the fictitious name Satoshi Nakamoto "who" authored the Bitcoin, the world's most famous cryptocurrency.

Dave Kleiman, an American who died in 2013 (after being a wheelchair-bound forensics nerd since a 1995 motorcycle accident; he died broke and his decaying body was found surrounded by alcohol), is said to be the main co-father. It's not hard to see that they cooperated in 2008 if not earlier. Their 2008 paper on hard drive forensics (42 cits) is as error-free and readable as the Bitcoin.pdf paper.

Wright suddenly decided to reveal himself, was mysteriously invited to a conference which wouldn't have happened if he hadn't some special links. A part of the evidence was a January 2009 blog post at gse-compliance.blogspot.com announcing that the Bitcoin would be started momentarily; and an overlap in his e-mail addresses and telephone numbers with Satoshi in the very early days of the Bitcoin. It may be shown that Wright was at least a very early Bitcoin miner (since 2009) and a top 17 miner in the world.


Numerous people have been tipped as "being" Satoshi Nakamoto in the recent years but Wright is the first one who seems to say "yes" and who passes lots of nontrivial tests related to his expertise etc.

It just happened that on the same day, his house was raided by the police and the Australian tax office. They want him to pay $1.7 million or something like that. He's been the head of many companies and has many degrees related to the computer security, statistics, mathematics, and law.

The value of the Bitcoin went up in recent week and has almost doubled since an August bottom.


His blogs and Twitter accounts have largely disappeared from the Internet and it's not trivial to find the archived copies. This is how the gse-compliance blog spot looked like before it was erased. But you may check his profile at Quora which also shows that he is standard full-fledged climate skeptic.

The Conversation web lists some of his achievements related to the computer security. You may get much more at LinkedIn. One of Wright's companies, Panopticrypt, modestly points out that Wright is "the only person in the world to hold all three GIAC Security Expert (GSE) certifications, making him certifiably the world’s foremost IT security expert."

(By the way, the idea that "Satoshi" should be some modest or PC person may only be believed by brainwashed imbeciles. The Bitcoin was clearly designed by a very ambitious man. Some religious Bitcoin cultists also claim that the true Satoshi would never cheat anyone or land $54 million in taxpayer-funded rebates like Wright. Sure. And everyone who invents an interesting computer thing must be the son of Allah and Mother Teresa, too. They also say that he didn't speak lucidly. Sure, discoverers of big things must speak just like Obama the empty suit. Or perhaps this is a totally wrong way of thinking? The stupidity of some people is just breathtaking.) 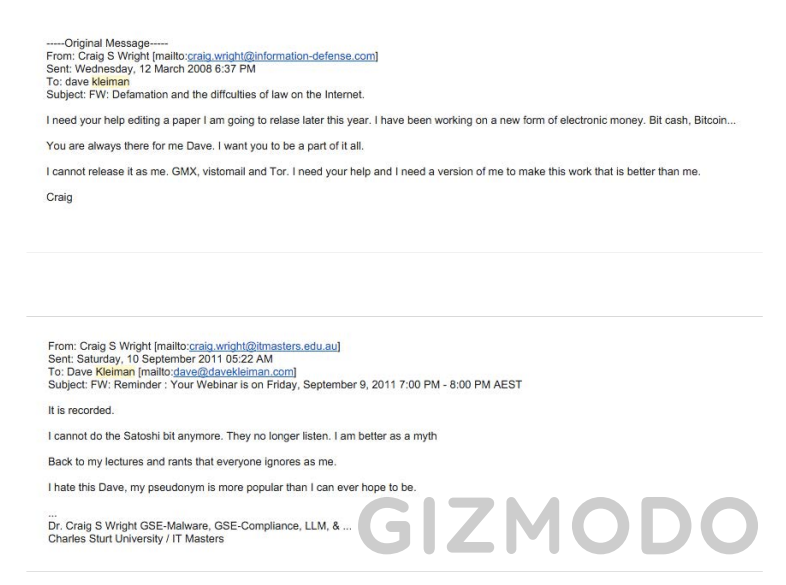 A real or forged 2008 e-mail from Wright to Kleiman proving Wright's work on the Bitcoin; and his 2011 dissatisfaction with his alter ego's being 1,000 times more famous than himself

It seems obvious to me that this guy, Wright, must be pretty much ingenious and sufficiently equipped to be the father of the Bitcoin. I don't have any "totally robust" proof that he is the father of it – some coders have probably helped it to be born but he would be the mastermind. But let's assume he's Nakamoto. The concept has been praised by so many people that I would find it insane if he were too harassed by the Australian tax authorities.

Because he's an outspoken enough climate skeptic and close to being the world's #1 expert in hacking, I can imagine that he's also the mysterious guy behind another famous event that has done more than to create $5 billion in the Bitcoin currency. The event has at least delayed some insanely wasteful policies designed by some of the world's foremost psychopaths that are devouring hundreds of billions a year – at least by six years. It that is true, then Mr Wright should be worshiped as a semigod. (The big event I am mysteriously talking about included a call in 2013 to send contributions via the Bitcoin.)

I think that most of the skepticism about Wright's being Nakamoto is due to the people's assumption that the Bitcoin is so divine that the author has to look like Jesus Christ and live in the clouds. (They would need to be explained that no people live in the clouds but that's probably too ambitious a pedagogic goal.) He cannot be composed of flesh and he cannot have any "ordinary" background, degrees from not-quite-the-most-famous universities, and similar baggage, they think. Maybe, the "true" Nakamoto isn't allowed to be a climate heretic, either. However, things like the Bitcoin are often produced by overlooked ingenious nerds with several degrees who are doing amazing things in their garage – men just like Wright or Einstein, for that matter. 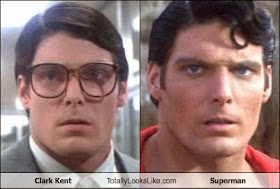 If Wright is Nakamoto, it will hopefully get very clear soon. However, at this moment, if the identity holds, Wright is one of the most underrated folks not only in this industry in the whole world. You may check a panel about the Bitcoin a month ago where a woman asks: "But who are you!? Why would the world's well-known fans of the Bitcoin ever talk about an apparent zero such as yourself." I can imagine Wright's temptation to say "I am God above all of you, f*cking lady." But he answered "I am a little bit of everything." You know, writing under pseudonyms may have advantages but I have always known that despite my modesty, I would get terribly frustrated for not really getting the credit. I think that Wright may have underestimated his and natural human tendency to be fairly rewarded.

BTW Dr Wright has lost lots of money when Mt Gox collapsed last February. They could have been the Genesis coins, too.
Luboš Motl v 1:10 PM
Share