An ad: Joseph Conlon, the young Oxford professor behind WhyStringTheory.COM, has released a book of the same name.

Ralph Blumenhagen has posted a string phenomenology paper of the kind that seems both intriguing and hugely underrepresented. String theory is being connected to some emerging anomalies, in this case the apparent bumps resembling new \(W\)-bosons of mass around \(2\TeV\).


Intersecting Branes, SUSY Breaking and the 2TeV Excess at the LHC


As I have discussed from many angles, the most natural explanation of such a bump would be an extension of the Standard Model to a left-right-symmetric gauge group: the asymmetric \(SU(2)_W\times U(1)_Y\) of the former (the electroweak gauge group) is extended to \(SU(2)_L\times SU(2)_R\times U(1)_{B-L}\).

One may naturally think that this gauge group, including the QCD \(SU(3)_c\), is embedded into some \(SO(10)\) grand unified group. The latter may be a leftover of a larger \(E_6\) group or not – but at any rate, you may assume it ultimately comes from some \(E_8\) heterotic group in ten dimensions.


The heterotic models based on \(E_8\) are not the only class of string theory compactifications that naturally produce remarkably realistic particle contents – although I still think that they're the most Nature-like and promising compactifications. There are about 5 other descriptions of limits and classes of string vacua.


F-theory – the geometrized and generalized treatment of type IIB string theory that pretends that there are two extra dimensions on a torus (the F-theory spacetime "has" \(D=12\)) – is the class of compactifications that is often remembered as the "most populated one" and it is the main detailed basis for the "multiverse" paradigm within string theory. 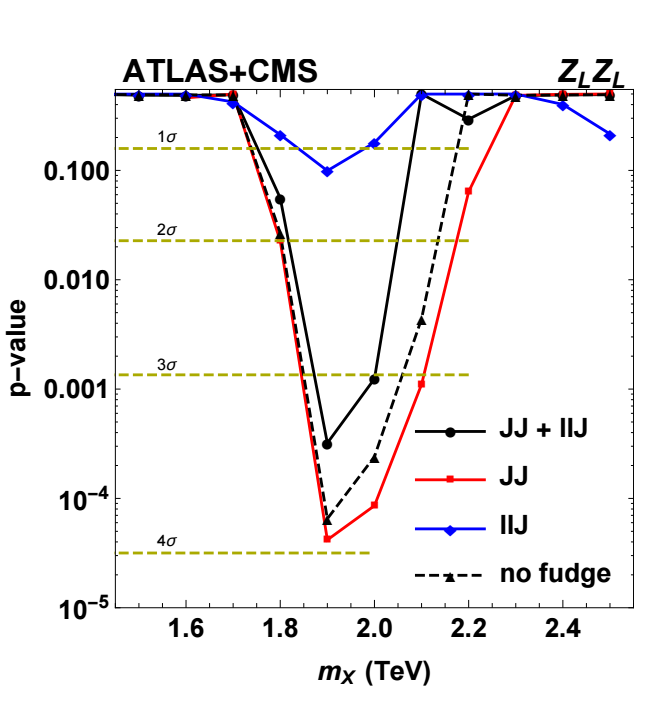 According to a new hep-ph paper, the ATLAS+CMS combination allows you to say that there is a locally 4-sigma evidence for a new particle around \(1.9\TeV\). If it is a charged gauge boson, the production cross section is around 5 femtobarns.

But there may still be rather simple theories based on type IIB string theory. Blumenhagen considers


type IIB string theory on a Calabi-Yau three-fold, or a \(\ZZ_2\) orientifold of it, with intersecting D7-branes added.


The \(N\) coincident D-branes carry the \(U(N)\) gauge group, including the \(U(1)\) factor. Collectively, a group of such coincident D-branes is referred to as a "stack". If you have many "stacks" extended at different submanifolds of the spacetime, you obtain a gauge group that is the direct product of the individual factors.

When \(N\) D-branes plus their orientifold images approach the orientifold (and therefore their images as well), the group \(U(N)\) gets extended to \(O(2N)\) or \(USp(2N)\). In the former case, the gauge group you may obtain with the help of the orientifold plane may include \(O(K)\) both for even and odd values of \(K\). The odd case includes a "fractional" D-brane, or a half-D-brane, that is stuck on the orientifold plane because it has no image.

This string phenomenologist takes some Calabi-Yaus and wraps D7-branes on various 4-cycles of the Calabi-Yau three-fold – so that they get reduced to spacetime-filling D3-branes in the well-known 3+1 dimensions. He basically studies two ways of getting the left-right-symmetric gauge group from the D-brane groups,
In the D-brane models, non-gravitational matter fields arise from open strings that have, as you know, two end points. So the possible representations under the gauge group are basically restricted to some kind of "bifundamental reps". They are very constrained and Blumenhagen notices that some Higgs fields can't be obtained and must be replaced by others.

But for the well-known fields, the two-end open strings seem enough. The quarks are a color triplet (the color index sits on one end point of the string which is attached to the QCD color D-brane stack) and a doublet either under \(SU(2)_L\) or \(SU(2)_R\) (the other end point). Well, one also needs to check that the fields have the right \(U(1)_{B-L}\) charges but he claims to solve this issue, too. The Standard Model Higgs boson is a doublet under both \(SU(2)_L\) and \(SU(2)_R\), it's the real representation \(({\bf 2},{\bf 2})\) under the product of these two groups. So you can get it by stretching the open string between the two \(U(2)\) or \(USp(2)\) stacks. It's enough because the Higgs doesn't carry any color. 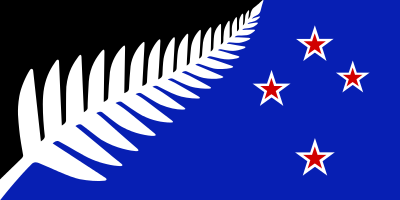 Off-topic: Kyle Lockwood's "silver fern" flag came out victorious from the latest New Zealanders' referendum about their new flag. The current flag seems obsolete and too close to the Australian one. This new one is elegant but too complicated. Why don't they get modest and pick e.g. the Czech flag with the "blue" replaced by "black"?

Blumenhagen demands three generations of quarks and leptons but sensibly allows the number of Higgses to be "several" – the gauge groups may be broken by several copies of the Higgs fields. It turns out, however, that the supersymmetry breaking scale seems to be calculable and universal, at least for the same parity of the number of some Higgs fields. It is \(19.2\TeV\) if the number of these fields is odd (but otherwise arbitrary – and regardless of the choice of the Calabi-Yau). It's quite amazing that one can make universal precise predictions like that – which hold for 50% of this whole rather important class of string vacua. He explains why it's so that the inequivalent vacua agree about this particular quantity.

With reasonable choices of the number of copies of Higgs fields etc., he may also recover the gauge coupling unification that is as good as one that we know from the simplest \(SU(5)\) GUT.

I think that the number of string phenomenologists is too small. It's my belief that every phenomenologist who is creating models similar to left-right-symmetric models or grand unification etc. should learn some string theory and dedicate at least a page of her papers to discussions of the possible or impossible embedding of the models in string theory.

Don't get me wrong. I am not saying that physics beyond the Standard Model can no longer be studied by effective quantum field theory. It almost certainly can. But the naturalness with which a model may be reconciled with string theory, the only unifying theory of forces including gravity that we know, is a nontrivial piece of evidence that should decide about the trustworthiness of one model or another. And if some model(s) seem(s) truly natural from the stringy viewpoint, the number of predictions could be much higher than what the effective field theory could lead you to believe.
Luboš Motl v 8:39 AM
Share