An incandescent light bulb, the most efficient bulb

One of the things that the government bureaucracy can't do is to predict the direction that the free scientific and technological progress will take in the future. No one can really do it, not even the best minds let alone stupid arrogant aßholes that have to be employed as regulators within the government structures.

MIT researchers have reminded us about one striking example. The Wikipedia contains a page titled Phase-out of incandescent light bulbs whose first sentence says:


Governments around the world have passed measures to phase out incandescent light bulbs for general lighting in favor of more energy-efficient lighting alternatives.


You see, governments across the world "passed measures" based on their belief – a dogma, to be more precise – that there's something intrinsically and unavoidably wrong about incandescent light bulbs when it comes to their energy efficiency and this defect can't go away.


But the energy is conserved. It can't get lost, it may only be converted from one form to another. What we care about is whether the form of the energy that we get is "useful". Heat is often considered useful by many people – but sometimes it's not.

Incandescent light bulbs are based on the conversion of the electric current to heat which gets converted to light because heated objects emit electromagnetic radiation. The emitted light nicely carries all the frequencies, especially those within the interval of the visible spectrum, but also some frequencies that are "not useful", like the infrared waves. Those don't help us to see and only propagate as a form of heat.


about their Nature nanotechnology article


Tailoring high-temperature radiation and the resurrection of the incandescent source


which reports their results on the construction of a light bulb that that is going to be almost 3 times more efficient than the best LED light bulbs. The latter only convert 7-15 percent of the energy to light; the new MIT technology is estimated to get to 40 percent soon although with the efficiency of 6.6%, the prototypes only "match" some of the weaker LED competitors so far. That's still a 3-fold improvement from "bare" conventional light bulbs whose efficiency is 2-3 percent. Fluorescents stand at 5-13 percent.

To make things really old-fashioned, the most important light-emitting component of their light bulb is... a wolfram (tungsten) filament, the same one people have been using since the 19th century. It is heated to 3,000 kelvins. So far, everything sounds conventional. What's added is the stuff around,


which is designed so that it simply transmits the visible light while it reflects the infrared light. So the "invisible" infrared light that would normally escape and turn its energy into heat losses is (partly) reflected back to the filament and helps to increase the temperature of this filament so that you don't have to pump too much electricity into it. When the filament gets another chance (or another chance afterwards, and so on), it may emit the same energy in the form of the visible light. 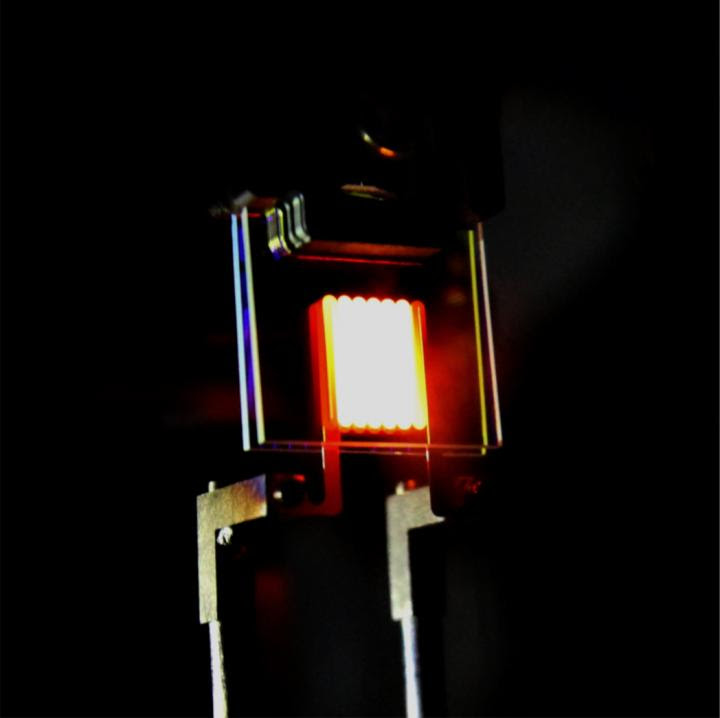 Picture of the prototype by Dr Ilic

In this way, Ilic, Bermel, Chen, Joannopoulos, Celanovic, and Soljacic simply "recycle the light". Some light that has the wrong frequency gets returned to the source and has an increased chance to come out as the light at a "right" frequency. The know-how behind the materials that may return one frequency and transmit another is known as the photonic crystals. They are periodic or nearly periodic nanostructures that act on the light of different frequencies much like the ordinary crystals.

The advantages of incandescent light bulbs are obvious. The flawless white light contains the electromagnetic radiation of all visible frequencies – pretty much fairly represented – and the light bulb has the right color and intensity a split second after you turn it on. I am sure that many people would welcome the comeback of Edison's light bulbs.

There exists a general reason to think that all similar plans to "switch the world's technology" from one type of a product to another (e.g. from incandescent bulbs to LED) is completely counterproductive: such communist-style planning doesn't work well at any timescales. What do I mean?

Well, such transitions can't be "prescribed" too quickly because the transition costs and the hassle would obviously be too high. You would need hundreds of millions of people to replace their light bulbs quickly. You don't even have this many new light bulbs and so on. So these regulators typically define a deadline – five years in the future or something like that – by which point the transition should take place.

However, this delayed implementation paradigm is completely flawed, too. It's flawed because the research in labs such as the MIT labs often takes place more quickly than that – more quickly than the time needed to replace products in the real world. And in five years, completely different products may be ready that totally change the game and that can make the bulbs (or other technologies) rendered obsolete the winners again.

Similar comments apply to much more serious questions than the light bulbs – such as the fossil fuels. Whether fossil fuels are going to be the best solution in 2040 or not depends on the answers to many questions that are currently unknown. Fossil fuels seem to be the most convenient source of energy today but this may very well be the case in the future, too. Many discoveries may take place. The CO2 climate sensitivity may turn out to be extremely low. CO2 may be captured in a way that will shut the mouth of the climate alarmists even if the sensitivity is high. Fossil fuels may become renewable and people will produce them from something else (plus another source of energy). And so on. Whenever something like that happens, it will mean that the rational way for the people to adapt will be different than before. It's totally harmful to predetermine how the people should behave in the next 5, 10, or 20 years.

It is a form of a terrorist attack for someone to try to eliminate the incandescent light bulbs or fossil fuels or anything else from the spectrum of competing technologies. People trying to ban whole segments of technology must be treated as Luddites and on par with other terrorists.
Luboš Motl v 8:28 AM
Share