An interview with Sleeping Beauty on Wednesday

Yesterday I had to spend more time with the computer because someone was wrong on the Internet. ;-)

A guy has emerged in an old thread on the Sleeping Beauty problem. I've reviewed all the important facts known to the halfers – no new information, the dangers of the sampling bias, absence of reason for an "egalitarian" probability distributions in random sets – while that "someone" repeated all the misconceptions and misleading talking points by the thirders. "Šípková růženka" literally means "Dog-rose Rosie" in Czech. "Růženka" is an affectionate way to call Rosie. To make things subtle, the full botanic translation of "dog-rose" is "růže šípková" which is almost identical to the name of the fairy-tale (and its heroine).

Such discussions don't make much sense but I think that when I rephrased the problem in terms of stochastic matrices, I found a funny simple way to show how ludicrous the answer \(P=1/3\) is. Normally, the Sleeping Beauty is only awakened on Wednesday to make the problem sound human. But she's been a heroine, a guinea pig in a great experiment, so why shouldn't people ask her questions when the experiment is over? ;-)


So the experiment is as follows:

In both cases, she is awakened on Wednesday as well and surrounded by banners:

Welcome back, Sleeping Beauty! It's Wednesday and we love you.

Whenever she is awakened, she is asked about the probability that the coin is showing "heads" at that moment. What should she answer?


The correct answer for the banner-free, Monday and/or Tuesday awakenings, is \(P=1/2\). She knew that regardless of the coin, should would be awakened at least once on Monday and/or Tuesday. What she observes when she's awakened on those two two days is nothing else than that the number of awakenings is at least one, but she knew that before, too.


But the funny new thing is the question by her fans on Wednesday:


We really love you, Rosie, but what do you think is the probability that the coin is showing "heads" right now?


Now, I think that all sane people will agree that she should answer \(P=1/2\). Whether the coin landed heads or tails, and those options had the same probability, she is awakened once on Wednesday. Equally importantly, her torture or sleep on the previous days – which she doesn't remember in any detail (she only remembers that she was awakened the last time, either on Tuesday for heads, or on Monday for tails, but she can't measure how long ago it was – I should have said that she had no timers), has absolutely no impact on her opinions about the coin on Wednesday!

Because the whole inhuman experiment doesn't matter and by Wednesday, it couldn't have conveyed any new information to her, we may totally forget about the experiment and the odds of heads and tails are obviously \(P=1/2\) just like they were on Sunday.

But what does it have to do with her believed probabilities on the first two days of the week, after the awakenings without banners and fans? 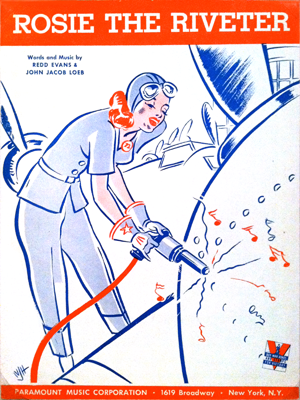 Do Americans realize that this lady is the Sleeping Beauty's namesake? "Rosie the Riveter cover" by Source. Licensed under Fair use via Wikipedia.

One of the wrong claims by the thirders is that "she is getting new information after all" when she's awakened on the first two days of the week because they may eliminate "it's Tuesday now and the coin landed heads". But the point is that this option has been impossible by the rules of the game already on Sunday so nothing has changed.

At any rate, on her last among the Mon/Tue awakenings (or any Mon/Tue awakening because she can't distinguish them even if there are two and she doesn't know the state of the coin), she decides about some probabilities\[

\] The thirders assign the probabilities \(1/3, 0, 1/3, 1/3\) while the correct answer is \(1/2, 0, 1/4, 1/4\). But we can now reveal new evidence for that correct answer by calculating the new probabilities she should believe when she's awakened on Wednesday. On that day, she knows that it's Wednesday so there are only two probabilities that matter,\[

\] The Wednesday in the subscript says that "the proposition says that it's Wednesday" while the Wednesday in the parentheses indicates when we evaluate the proposition. If the parentheses are missing, it means that we evaluate it during a Monday-or-Tuesday awakening. During all the 3 possible awakenings, the values of the probabilities should be the same because she can't distinguish them. But I must emphasize that this means that these probabilities wouldn't depend on the information in the parentheses (which I omitted); they do depend on the subscript i.e. the character of the proposition! One must be careful about it. To say that all rows of a matrix are the same is something else than to say that all columns are the same.

Because she hasn't learned anything new about the coin on Wednesday (and it will be extremely hard for the thirders to invent a demagogic counterclaim that wouldn't sound totally silly, I think), we may calculate the probabilities of each coin state on Wednesday as the sum of all the probabilities with the same coin state but arbitrary day-of-the-week during the last Mon/Tue awakening.\[

\] The right hand side of the second equation contains two terms even though Wednesday only follows after Tuesday. But in the case of tails, her memory is also erased after the Monday awakening, and this makes it possible for her psychological time to be "connected" from Monday to Wednesday, too. At any rate, the halfers will obviously conclude\[

\] I think that whether you like it or not, the thirders will end up concluding that \(P_{Wed,heads}(Wed)=1/3\) because they have to copy this subjective probability from \(P_{Mon,heads}\) on the last (and first) awakening in the case of heads, one on Monday. On Wednesday, the coin is showing heads if and only if it was showing heads on the previous days/awakenings, so the probabilities have to match. Even on Wednesday, after all the specific coin-dependent torture is over, they will still think that the tails is twice as likely as the heads.

Do the dear thirders think that even on Wednesday when the game with drugs is over, Rosie should say that \(P=1/3\) instead of \(P=1/2\) for the heads? ;-) To say that the two inconsequential awakenings on the previous days would increase the probability of "tails" on Wednesday is just like saying that the probability of tails may be increased by eating twice as many hamburgers. You know, the number of awakenings or hamburgers may be influenced the coin state; but the coin state cannot be influenced by the awakenings or hamburgers – there is no causal influence of this type affecting the coin.

Or will they invent some "new information about the coin" that the Sleeping Beauty has learned on Wednesday? :-) In their previous demagogic comments, they said that on the Monday-Tuesday sessions, she could eliminate "heads Tuesday" (while overlooking that this pair was eliminated already on Sunday). But what could she eliminate on Wednesday? You can't find even a demagogic argument here.

Sorry but it's clear that by Wednesday, she hasn't learned any useful information about the coin, so she couldn't have learned it during the Monday or Tuesday awakenings, either, and the probabilities of heads and coins remain \(P=1/2\) at all times.
Luboš Motl v 6:45 PM
Share