Prisons and zoos may be exceptions

The Czech public is shocked by the news – also reported by Breitbart and The Daily Mail, among others – about the words that an Islamic Salafist imam in Cologne, Sami Abu-Yusuf, made about the 1,000 or so Cologne assaults on women on NYE. (800+ women have complained so far; 521 of the assaults had a sexual flavor, 3 are known to be full rapes so far; 1 person was charged so far.)

The imam has made these statements for a major Russian TV; go to 8:20. Only the women themselves are responsible for the assaults because they were "half-naked" (which probably means the winter jackets without burqahs etc.) and perfumed. In other words, women are obliged to pour camel urine on themselves, and completely cover their bodies by black clothes.


I am sorry but Cologne is a European city and pretty much in general, Europe recognizes both the human freedom and the women's beauty. It encourages them to look and smell attractively. Such a setup has good reasons – the world is prettier when people aren't trying to hide things that are pretty; and it is more pleasant to smell when nicely smelling things are encouraged and the stinky ones are discouraged. Most women want to be attractive as well. But even if they are, this doesn't give anyone the right to violate the integrity of their bodies. The freedom ends where the freedom of someone else begins.


It is not surprising the men wanted to attack them. [Dressing like that] is like adding fuel to the fire.


From a strategic viewpoint, it's indeed increasing the probability of similar attacks if a woman exposes her beauty and scent. But our basic European thinking about the laws is such that she - and every human being – has the complete right to make herself or himself more attractive. When she does so, she in no way reduces the guilt of the attacker. A woman who is uncovered makes an attack more likely (which is an issue especially after a year in which one million illegal immigrants have entered Germany); but it does not make it less illegal!

A woman could be adding fuel to the fire but when everyone who thinks about justice or enforces justice must primarily look at the originators of the fire itself. And quite generally, if he had anything to do with the moral leadership for some people currently finding themselves at the German territory, like the North Africans, he would be addressing his thoughts to them - and not the the deutsche women who clearly don't consider imams to be authorities.

The assaults, mostly by North Africans, were clearly a planned tool designed to gradually transform Europe into an extension of North Africa and the Middle East. And they could have been just an innocent "demo" of what may await us in the future, perhaps a very near future.

I believe that something like that wouldn't be tolerated in Czechia. Whether Germans will ever wake up remains uncertain. The imam and all other imams spreading similar views should get an offer. Either they will get deported (and you really should avoid nonsensical clichés about his being a European), or they will be treated according to the European laws and habits. And according to the European laws and habits, individuals in the background who defend if not organize such mass illegal outbursts of the animal-style behavior belong either to a prison or to a zoo.

A savage who justifies and encourages crime simply can't get the license to act as a sort of a spiritual leader; he is really a mastermind of organized crime. Maybe something like that is possible in North Africa or the Arab World but Europe is neither, it's a relatively modern, civilized continent.

This discussion is about much more than perfumes or clothes which allow women to partly expose their bodies. But even if the perfume industry and a part of the apparel industry were the only things that would be threatened by this Islamist activism, I would surely prefer to ban Islam. We can't de facto ban perfumes or Western clothes just because a would-be spiritual jerk along with a million of half-apes who listen to him try to blackmail at least one-half of the European population.

And if Islam gets some protection, the religion of perfumes and skirts must get it, too.

The imam's views disprove the nonsensical legends about the attacks' being the work of a few exceptions that may be caught and solved – while the bulk of the Muslim population is OK. In reality, the attacks may be considered a standard example of the mainstream Muslim culture – or the Muslim lack of culture, if you prefer more accurate statements. As the Czech president Zeman recently repeated, Muslim integration is practically impossible in Europe. 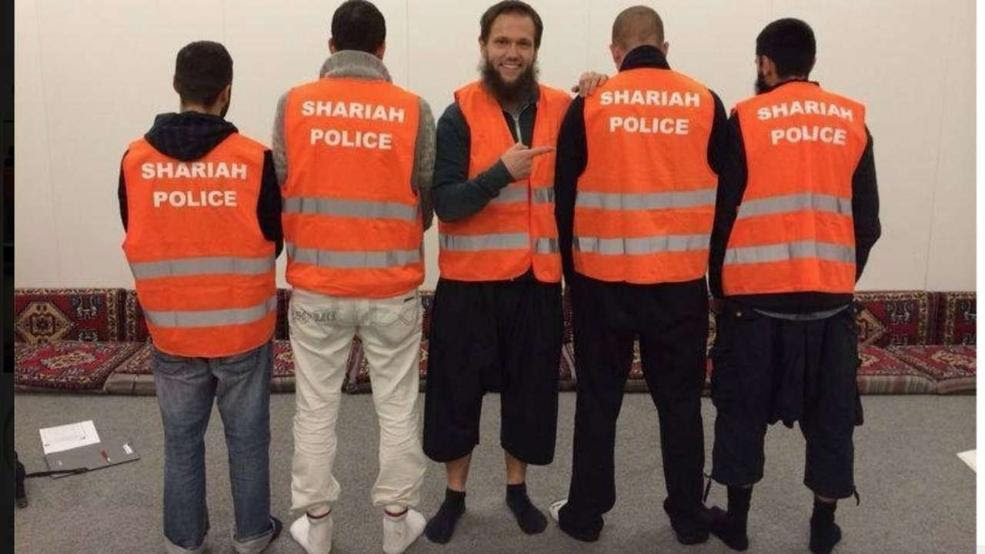 The sexual assaults aren't the only "genre" by which these folks are working on decivilization of Europe. Another "genre" is the so-called Shariah Police – a bunch of thugs walking in the streets who try to threaten the people doing ordinary things such as drinking alcohol, gambling, or even listening to music. One month ago, a German court decided that this Shariah Police didn't violate the laws – mostly because they didn't try to look like the real German police.

They have no "right" to prevent people from doing the activities above and if they have a problem with the non-existence of this right, they should go either to North Africa, the Middle East, or a zoo (inside a cage), or a prison. They just don't belong to the streets of Europe.
Luboš Motl v 2:10 PM
Share