Do we remember the snows of our childhood?

In this winter, more frequently than ever before, I was involved in discussions comparing the weather we're experienced in recent years with the weather we remember from the times we were kids. 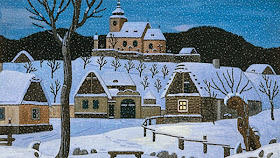 The general spirit is as follows: the winters had to be chillier and more snowy and we went sledging and skating all the time. A Christmas that was as warm as it was in 2015 – up to 11 °C in Pilsen and it wasn't the warmest place in Czechia – used to be impossible.

Sometimes I tend to say similar things myself. But are these "memories" really true? Can we remember it?


What do I actually remember about the weather 30+ years ago or so? Could the difference have been easy to discern, statistically significant to the extent that the effect is clear to the naked eyes, and attributable to the rising global warming trend?


Note that in the recent 3 or 4 decades, the global warming trend amounts to 0.15 °C a decade or so. So three decades ago, the global temperature could have been some 0.5 °C cooler than now. If you observe a much higher difference than that, it's clearly a regional meteorological accident that can't be blamed on global changes. So let's assume that the change was 0.5 °C.

Can you "see" such a difference without making very accurate measurements and a very careful statistical evaluation of these measurements? An obvious answer must be No. 0.5 °C is so small that it's close to the temperature change that the most sensitive person is capable of feeling via his skin. When the temperature is oscillating around the freezing point, half a degree may cause a substantial change in the percentage of time above the freezing point. This can make snow less frequent.

Fine. Let me finally give you some answer to the question What I remember the weather was like 30 years ago.

I do remember some classic freezing winter scenes – but after the spring-like Christmas, we've had them in this year, too. The January has been mostly snowy and mostly below the freezing point here so far and the temperature has been below -10 °C.

Well, I also do remember my shock as a boy when I saw that the temperature outside was –20 °C. I don't remember the exact date but even though I did look at the thermometer rather often in the winter, I don't actively remember a reading chillier than this. But we had such chills in recent years, too. (The Wikipedia table claims that the coolest recorded temperature in Pilsen was -28 °C in December and –25 °C both in January and February.)

I am the smaller one, the other one is my dad. Last night when I checked, the Bolevec Pond - the main natural place for the Pilsner folks to swim in the summer – looked almost just like these 40 years ago. The ice is currently thick and it's covered by snow.

And then I remember something very clearly: I remember the snow that used to get dirty almost immediately. This memory seems extremely different from the beautifully white snow that we've been seeing around for weeks now (I remember the same clean white snow from the mountains 30 years ago, of course). What is the cause behind this difference? Up to recently, I assumed that the transportation spread lots of mud.

However, I decided that it can't possibly explain the difference because we have lots of cars around and the salt is applied in similar ways as it used to be. Correct me if I am wrong but I believe that the dirty snow was actually due to the chimneys in Škoda Works - which got much cleaner in recent decades. This dirty snow was due to smog, I think. And if the chimneys weren't the primary culprits, it must have been the much dirtier diesel engines we had 30 years ago.

Were winters in the early 1980s full of snow without any interruption? Was Christmas guaranteed to be white? I don't remember the whole exact weather record but I remember enough to be certain that the answer is No. I do remember snowless Christmases. A white Christmas was about as uncertain as it was today.

What about the summer heat waves? The weather was often warm, sometimes it was less warm. When I look at it rationally, I don't remember any "clear" difference. However, I do remember the Summer of 1983 rather clearly. It was superhot.

The Internet sometimes allows you to easily verify similar "feelings" and distant memories. And it works. Lots of web pages say that July 27th of 1983 saw the warmest temperature reading on the Czech territory (regardless of place and moment) – it was 40.2 °C in Prague-Uhříněves, a rural suburb of the capital city. This reading was only beaten in August 2003. Prague-Dobřichovice saw 40.4 °C. In Summer 2015, Czechia worked hard to beat the record but it failed - the warmest Czech reading was some 39.3 °C.

The difference between 40.2 and 40.4 °C is tiny but it makes complete sense. You don't really expect any greater differences. As I said, the global mean temperature increased by something like 0.5 °C in those 30 years. So if you compare the warmest temperature (somewhere, defined according to some fixed conditions) of one decade and compare it with the same "top reading" of a decade 30 years later, you expect the more recent decade to show readings warmer by 0.5 °C only. In reality, the noise is much larger than that and records are easily broken (or not broken) by several degrees. When it's so, it's obvious that it's basically a matter of chance which of the two decades shows a hotter reading. The contribution from the global trend may be largely neglected.

What about the percentage of winter days with snow?

In Pilsen, the only sub-freezing months are December, January, February with the average temperatures –0.2, –2.2, –1.3 °C, respectively. The actual temperature oscillates around those averages – and the standard deviation may be around 4 °C. The percentage of time above the freezing point is around 50% when the average temperature is close to the freezing point. Because 0.5 °C is about 10% of the standard deviation, the warming reduces the percentage of "potentially snowy days" by something comparable to 10%, too.

I believe that this is a rather low percentage to be clearly seen and remembered for 30 years. If you want to find a difference, it may be easier to look for snow in warmer months when the snow is less likely. But I suspect that such episodes are usually driven by very unlikely big deviations and for those big deviations, the distribution is non-Gaussian (it has fat tails) so 0.5 °C of a "boost" doesn't help much, either.

Many of you are older than I am. Can you remember much cooler winters when you were a child?

I am sure that many of you do. But many of you must remember the opposite. After all, the mid 1940s were probably warmer than the mid 1980s. Or to say the least, they were not much cooler. The 1960s were probably substantially cooler at many of the places we inhabit. But these "memories of the much cooler 1960s" can't be explained by a simple monotonically increasing "global warming trend" because the previous trend had the opposite sign.

Moreover, it's harder to remember things for 70 years. You may have forgotten lots of mild winters, too.

And this whole discussion was made from the viewpoint of those of us who already remember something. The average person in the world is younger than me and lots of the people whom the climate fears are addressed are very young. From their viewpoint, the question whether there was more snow in the 1980s or the 1950s must be completely irrelevant.

Our history teacher at the basic school understood the effect very well. She sometimes complained: "For you, everything that took place before you were born was a part of some irrelevant ancient history." It doesn't matter whether it's the Second World War or the Greco-Persian Wars. What she was disturbed by was something obvious – people were losing the real-world attachment to some historical events which makes her favorite subject less attractive than it should be.

But the observation she made is true and legitimate, too. Whatever happened before you were born is just some abstract history for you.

The difference between the weather of our childhood days and the current weather is a cosmetic issue. We're really not comparing which of these two patterns was better for agriculture etc. – be sure that the slightly warmer weather is slightly better. We're trying to judge which of the two "weathers" is more romantic or more fun to play with.

Because the rate at which the global mean temperature is changing doesn't seem to substantially increase (and because the greenhouse effect is logarithmic, it is more likely to slow down), the rough feelings of the adults in 2080 - who are small kids today – will be totally analogous. They will only remember some relatively mild, non-essential cosmetic differences between the two "weathers" and most of these memories will be self-deceptions, anyway.

Even though a warmer weather in 2080 is somewhat more likely than a cooler weather, it is not "overwhelmingly" more likely. We really don't know whether the following decades will be cooler or warmer than the recent ones. This fact combined with the tiny, nearly homeopathic magnitude of the changes makes all the one-sided obsession about the future temperature trends absolutely foolish.

The human lifetime is long enough for the natural (and perhaps partly man-made) changes to start to become "marginally noticeable"; but it is also short enough for these changes not to be "game-changers". So this time scale is long enough to make some very sensitive or impressionable people believe that "something is going on" but what is "going on" is just barely visible – which means much smaller than what would be needed for it to be "important".

You could encounter much larger temperature changes if you looked e.g. to the year 60,000 AD. A peak of an ice age will be taking place. The temperatures will be some 8 °C cooler than today. Why isn't it more sexy for people to discuss these larger changes? Because people ultimately start to understand that the change is a natural process; and that it makes no sense to "plan" weather at timescales that are much longer than our lives. It is foolish to try to "plan" the weather at any time scale. And it is counterproductive to plan major things about the world's industry for one's whole lifetime, too. However, the foolishness of the latter thing is sufficiently "plausible to deny" so that some crazy people actually do deny this foolishness.

So the climate alarmism thrives in some corners because of this combination of a "barely visible" change of the temperature on the human life expectancy time scale combined with the "barely sane" idea to plan your whole lifetime and with the religion-like assumption that your plans and beliefs are the key things that actually determine what will happen.
Luboš Motl v 4:19 PM
Share