Ted Cruz and Donald Trump look like good presidential candidates to me on the GOP side.

Cruz recently announced that he and his family were the examples of the millions of Americans who lost their health insurance because of ObamaCare. Later, Cruz's campaign has found some papers that show that his BlueCross BlueShield insurance (which I also had for a few years while in the U.S.) was automatically switched to a new program - at least up to the end of January. 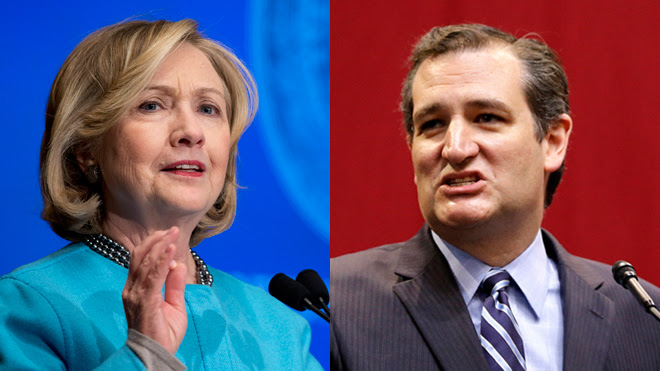 So he hasn't been without the health insurance yet. But I agree with the point of this "laugh line". The hassle resulting from the forced changes to the insurance may be too much even for a brilliant lawyer. This hassle isn't "purely" due to the Affordable Healthcare Act. But most things in the real world don't have pure and unique reasons and Obama's reforms have greatly contributed to the mess.

Meanwhile, Hillary Clinton and Bernie Sanders are the top candidates of the Democrats. It seems rather sensible but not guaranteed that it's already too late for other Democratic candidates to join the contest.


I have never been some kind of a GOP partisan who would be obsessed with the hatred of the Clinton family etc. My memories of the Bill Clinton era are pretty nice. It was a neat America from my perspective. Sometimes, it was neat because he didn't spend as much time with politics as he spent with Monica, for example. But most of the changes that left-wing politicians (even the moderate ones) introduce are harmful so if Monicas reduce the amount of this stuff, we should pray that there are many more Lewinskis around. Maybe, people who love the Good Old America should prepare their own daughters for the work as interns in the Oral Office of Democratic presidents. ;-)


I kind of expect Hillary's reign to be a continuation of Bill Clinton's era. The expectation could be right or wrong but I guess that many people sort of share this simplified picture with me. I don't believe it would be too big a catastrophe. Her being female seems irrelevant to me. By her training and behavior, she's an honorary man in the same sense in which Obama is an honorary white.

Now, the "e-mail scandals" are the worst problem for the Hillary campaign right now. I was trying to understand why it should be a huge issue but I have failed. Hillary hasn't sent e-mails from her personal server with the right expected security settings and tools. Well, I think it's nontrivial for people of her age to learn how to use the e-mail at all. She, like many people of her generation, has to rely on some "technical experts" when it comes to some fancier issues facing an Internet user – such as security protocols. So effectively, it's these people and not Hillary herself who have failed to do the things in a kosher way.

Some critics of Clinton say that any other ordinary person would have already been arrested if he or she has done the same mistakes. I don't quite believe it. There are not too many laws that require ordinary people to learn some rather advanced aspects of the IT security. And because nothing serious has really taken place because of these errors, at least as far as I know, there are good reasons for the authorities – and for the voters – to generously overlook these problems.

The mistakes can weaken or kill Hillary's campaign, anyway. See e.g. this text in the Washington Times that argues that she's basically kaput.

Her alternative is Bernie Sanders. Over 90% of the Democratic voters consider him honest – the score is below 70 percent when it comes to Hillary. And I tend to agree, he's probably more honest. Honesty is a great feature that allows people to live extraordinarily clear lives and sometimes do extraordinary things, too. However, even though I am naturally attracted to honest and morally strong people even if they have different opinions, I am afraid that honesty of a left-wing leader may be a devastating thing, too.

Sanders is an honest socialist. He wants "democratic socialism" which already sounds bad enough but it's been said that he's been sympathizing with the full-fledged communist regimes, including those in Cuba and elsewhere in Latin America.

I would choose an honest leader if other things were equal – or even if some minor or moderately important things were unequal. But at the end, I believe that what the American voters are deciding about is more important than a "moral beauty contest" i.e. the question whether the winner of the elections is the most honest among the candidates. In this monologue about "Socialism as Force", Milton Friedman has said that socialism failed not despite its principles but because of its principles. It has failed because it tried to impose "good" on the people against their will instead of leaving collective decisions to the voluntary cooperation, as it's done in regimes where people are basically free. The monologue ends up with the opinion that Lenin honestly believed that his plans were good intentions. But that's when you end up with the worst outcomes.

Maybe the American voters, including the moderate enough Democrats, should appreciate that Bernie Sanders is quite extreme and his honesty could amplify the extreme changes that America could suffer from under his reign. Maybe they want to be a bit more careful and pick Hillary – a candidate similar to those that have been tested – despite her flaws and her inability to send secure e-mails flawlessly.

There's some sense in which Cruz's health insurance problems are similar to Clinton's e-mail problems. Some "optimum" politicians may know everything about the ObamaCare paperwork and the new insurance plans that Obama's reform has forced the companies to offer. These "optimum" politicians could also know about TLS/SSL and HTTPS etc. But it's really silly. No people who understand politics well enough and have earned a sufficient political support have mastered both of these "classes of skills". Voters shouldn't expect the impossible.

At the end, the main issue is that I don't believe that the IT security is the most important human skill or a part of the humans' fundamental culture; and I don't consider someone's ability to reconcile himself with the ObamaCare paperwork to be a virtue. People who are willing and able to master the thickening layers of the government's harassment of the citizens are really a part of the problem.
Luboš Motl v 6:42 PM
Share