Last June, Andy Strominger gave an interesting talk at Strings 2015 (and published papers) on memories, soft theorems, and asymptotic symmetries. New hair was identified along with infinitely many new conservation laws related to the BMS supertranslations etc. Two months later, Stephen Hawking said that he had used these advances to solve the black hole information paradox – which he had started 4 decades earlier – "again". Hawking has mentioned that Andy Strominger would be one of his assistants in getting the new great idea out.

The main paper is now out:


They repeat some of the uncontroversial things from the Strominger-related papers alluded to above. But they add something new which seems controversial to me (at least so far). The new hair is claimed to be describable as zero-energy gravitons (for the BMS methods applied to the metric field) or zero-energy photons (when applied to the massless Maxwell field) at the event horizon. If I understand well, these new degrees of freedom are meant to equip the black hole with its Hawking-Bekenstein entropy (or at least contribute a big part to it). And these degrees of freedom cannot be excited because they occupy sub-Planckian distances.


I don't understand whether they believe that all these claims are actually derived so that all controversies are eliminated – in the same sense in which the BMS supertranslation symmetry may be derived. But I don't understand the derivations and the whole picture seems flawed to me right now.


First of all, I think that they really reproduce the most naive old opinion that the black hole entropy is carried by some actual but hard-to-see degrees of freedom strictly localized at the horizon. 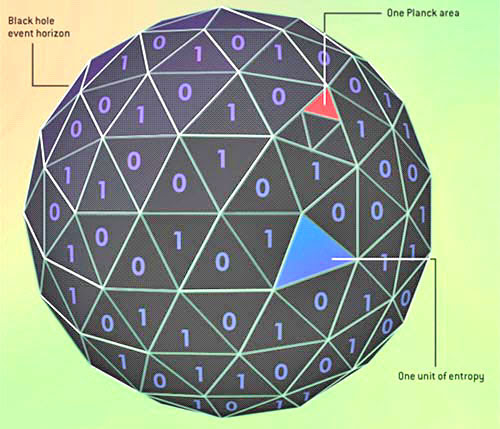 This simple Bekenstein's picture (I think that novelist Gerard 't Hooft loves to show it often) is very intriguing as a simple "explanation" of the black hole entropy-area proportionality. But it can't be taken literally not only because computers' "binary digits" or "bits" are very unnatural units of information; but because there's nothing special about the locus of the horizon and the locus may only be pinpointed in the future.

They don't seem to modify this basic old picture at all and I have always thought and I still think that this old picture was defective. In particular, the location of the event horizon is only known "retroactively" when we know the geometry of the whole spacetime including its evolution in the future. So it's always problematic to assign a special role to the horizon. If there exists a "purely bulk-based" description of the black hole entropy, I am sure that it must be more ambiguous about the question "where" the \(S=A/4G\) degrees of freedom are stored, or they have to be delocalized in some way (like in the monodromies or Wilson lines going over big portions of the space etc.).

Second of all, I don't really understand the notion of the "zero-energy gravitons". Zero energy means that the state is independent of time and the configuration should be slowly changing. (As I clarify in the comments, I should have written that the zero energy combined with the perfect localization at the horizon seem to violate the uncertainty principle.) I simply think that we know what low-energy including zero-energy excitations are and there's no room for lots of new degrees of freedom over there, especially not for degrees of freedom located in a region that looks smooth and regular from the classical GR viewpoint – and the vicinity of the event horizon does.

Third of all, when they say that the new degrees of freedom (soft hair) cannot be excited, it seems to mean that they can't be probed and distinguished, either (not even with complex experiments that take a lot of time?). But isn't it equivalent to the statement that the information gets lost? I am sure that the information doesn't get lost. In principle, one may describe the formation and evaporation of a black hole as a standard unitary S-matrix process – and ignore the GR picture of a "black hole with a different spacetime topology" in the intermediate state altogether.

If you allow me some sociological speculations, I do believe that most of the productive researchers who have studied the black hole information puzzle in recent years will find the paper rather orthogonal to the methods that have been considered promising and the insights that they have decided to be important and almost settled. In some sense, it does seem like this is a paper that could have been written in the pre-holographic epoch.

I think that the attempts to study the black hole microstates and information in the pre-holographic epoch were pretty much hopeless because they generally overstated the domain of validity of the local spacetime description.

After the Duality Revolution, I have concluded – and a vast majority of the practitioners in that subfield of string theory concluded – that it's a settled fact that the information wasn't lost when a black hole forms and evaporates. Matrix theory and AdS/CFT descriptions make it obvious that unitarity holds in every kind of evolution. However, what Matrix theory and AdS/CFT don't make obvious is "where" things are localized in the bulk spacetime. So we got used to the fact that some fog about the localization question "where the black hole degrees of freedom are at various moments" may be necessary for quantum gravity to preserve its consistency, a frail balance between the causal and similar restrictions coming from general relativity on one hand; and the strict unitarity etc. that quantum theory requires on the other hand. The view of the particle-physics-based quantum gravity researchers (which I consider the only correct one) is that the general relativistic concepts are just approximate and must be used very carefully because they ultimately break down; while the postulates of quantum mechanics remain exact.

Andy Strominger has always had some more general-relativity-centric views about these matters. He has often told us things like:


The Hawking paradox hasn't been solved so far. It remains a big mystery. If you disagree, show me a mistake in the original proof by Hawking that has concluded that the information gets lost.


OK, especially because there remain some uncertain aspects of the black hole physics and we may use various seemingly inequivalent descriptions, there are nuances and possible details in the ways how we understand various claims of this kind. But I believe that this claim is sufficiently unambiguous to decide on whether it's right or wrong. And I have always thought it was wrong.

We do know about some wrong steps or assumptions in Hawking's original derivation that seemed to imply that the information gets lost. That proof basically assumed that the strict locality – with respect to the classical black hole geometry's causal structure – holds for all of physics including the fine degrees of freedom that equip the black hole with its large entropy. I am confident that this assumption is incorrect – and I am certain that there is no valid proof that this assumption is correct.

So at the end, I have always had the feeling – and the today's paper has strengthened this feeling of mine – that Andy thinks that the "satisfactory" final answers to the Hawking puzzles must work with some localizable degrees of freedom on the classical black hole geometry and nothing else. I am confident that this is an outdated, naive picture, and Andy's research program differs from the actual state-of-the-art physics (like state dependence and other things) by being more naive, not by being more satisfactory.

I may misunderstand some logic in the new paper etc. but it does seem rather manifest to me that even though the paper (and its predecessors) works with some interesting and true aspects of classical GR, Andy and pals have missed (and almost directly, even if unknowingly, contradict) some important discoveries and lessons that the quantum mechanical research into the black hole information has uncovered in recent years.
Luboš Motl v 8:06 AM
Share