Only every 1461st day is a leap day – Ethan Siegel wrote a similar text on physics of the leap day as I would – but many interesting events have taken place on February 29th, anyway. 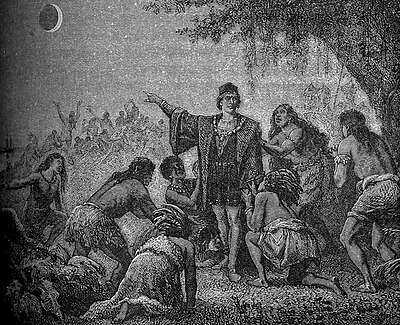 In 1920, Czechoslovak lawmakers adopted the first Czechoslovak constitution. In 1940, the Nobel prize in physics for the previous year had to be transferred outside Europe, because of the war. Ernest Lawrence got it from a consul in... yes, Berkeley, California. In 1952, Heisenberg's island of Heligoland was returned to Germany. In 2016, Leo DiCaprio won an Oscar.

But I want to spend some time with the first event in the Wikipedia list, an innocent total lunar eclipse in 1504. This event was interesting as a model for the funding of science.


Christopher Columbus had to obtain some resources from the Spanish crown but those weren't too original. We want to see how he got enough food from the native tribes in the New World. OK, on the evening of February 29th, 1504, the Columbus collaboration was spending their quality time in Jamaica. Columbus didn't know how far he has traveled. As far he could have said, they could have been in China.


But he knew enough to predict the total lunar eclipse within a two-hour error margin. To do so, he used the Ephemiris written by Regiomontanus, a German astronomer born as Johannes Müller von Königsberg. The two-hour error was actually larger than what Columbus should have been able to achieve but it didn't matter.

The problem was that while the native tribes were hospitable, they weren't hospitable enough for the spoiled members of the Columbus' team. After some time, the Europeans began to do something that organized groups of immigrants often do – to steal the food from the natives. The natives didn't like it too much and the hospitality went down.

Columbus needed to stay for several months in order to repair the ships that were full of holes (devoured by some worms). How did Columbus guarantee enough food for his activities? On the leap day of 1504, he ordered a meeting with the Cacique, the local chieftain. The indigenous people's administrator was informed that Columbus' God was upset about the treatment of the Columbus' people by the local tribes.


To show His anger, God would display the rising full Moon appear "inflamed with wrath".


It wasn't the first lunar eclipse that Columbus experienced on his journey – the previous one occurred in 1494 near the Not-yet-Dominican Not-yet-Republic. Now, in 1504, even though the locals claimed that no one could know the will of gods, the red Moon materialized as predicted. The local taxpayers


with great howling and lamentation [they] came running from every direction to the ships, laden with provisions, praying the Admiral to intercede by all means with God on their behalf; that he might not visit his wrath upon them ...


Because the plan worked so quickly and efficiently, Columbus returned to his cabin and prayed for the taxpayers. At the end, when his hourglass was showing that that eclipse was getting over, he informed them that they were forgiven. He had to do so because the wrath was temporary and guaranteed to go away whether Columbus wanted it or not. ;-)

But the explorer was probably the first man who used the eclipse to get some funding. Was his method an inspiring example to be followed by modern scientists?

I tend to say Yes. On one hand, he didn't communicate the lessons of science and astronomy accurately to the laymen: God's anger wasn't the real reason of the eclipse. And I generally do think that the scientists should speak the truth – even if they talk to the laymen.

On the other hand, the modern scientists often repeat another non-truth to the laymen, one which is perhaps even more fundamentally misleading. They often suggest that science is "no big deal" and the people who haven't mastered it are (or at least would be) equally capable of using it.

But it's really not the case. The local folks in Jamaica would have to learn a lot to be able to use the almanac – and to know why it works. If they had learned those things, they would become "new people". But at the moment when some people are ignorant about those things, there is a gap between the informed and uninformed folks. Columbus not only avoided the efforts to obfuscate this gap; he has exploited it to his advantage.

The relevant knowledge of astronomy (and many other things) was largely hacked and accumulated by the Europeans – and a certain "group" of Europeans. We often hear that science belongs to "everyone", to the whole mankind, but I think that it's really a politically correct lie that is only hurting the healthy relationships in the society.

Science does not belong to everyone equally. And the people who are completely ignorant about science are not full-fledged human beings. The nations that didn't invent or at least reinvent the nuclear weapons do not have the same moral right to use it, and so on.

Instead, science is an invention that resulted from the human progress and that depends on unusual skills and unusual efforts, an invention that gave humans – some humans – a great advantage in survival and natural selection, and these owners of science should use it wisely but they should use it, anyway. The regular taxpayers in the modern countries are in a situation that resembles that of the native tribes in Jamaica and the modern scientists may want to behave like Columbus did 29=512 years ago (a binary billion of years).
Luboš Motl v 8:07 AM
Share