Confidence in LIGO rumors: a poll

I am sort of interested how much people believe in rumors, in this case rumors that LIGO is going to announce the discovery of gravitational waves (see a PhD comics explanation of those). You may have read about the rumors on this blog and elsewhere. My most important source of the rumors is a person at a major enough physics place.

I've heard about the date, 11th February (next Thursday), from her or him, too (exclusive communication). Some cosmologists have reported cancellations of LIGO members' events on that day, too.


Moreover, a TRF reader who is a professional particle physicist has told us that at least two events detected by the LIGO detectors will be described (this issue isn't a part of the poll).


Finally, another source from the astrophysics circles has suggested to us non-exclusively that at least one event that will be reported will be the waves from the two mutually orbiting and merging black holes – each of them should have the mass exceeding 10 solar masses. Now, what's your feeling about the rumors? Please, don't feel any pressure, answer how you feel.


There is a separate page with the poll, too.

Thanks for your vote. 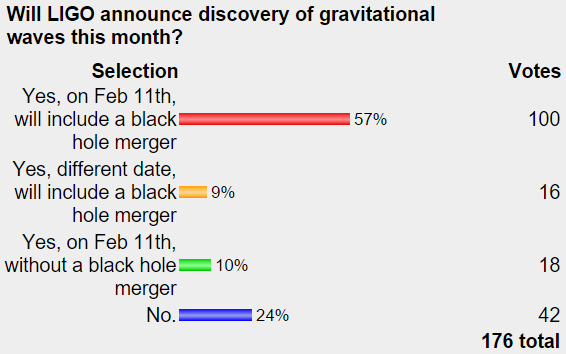 Cruz finally won narrowly ahead of Trump and Rubio who was almost as strong as the top 2 candidates. Hillary barely won over Sanders.
Luboš Motl v 3:00 PM
Share