I guess that many of you have both watched and listened to (!) the National Science Foundation event in the National Press Club, Washington D.C., too.

If you haven't, you should listen to the press conference. YouTube succeeded in guaranteeing a smooth transmission of the live stream to the 90,000 (peak) viewers.

Before NSF posted the official recorded video, I used the earlier Ruptly copy. The sound started at 0:18:05 and ended at 1:29:30 in it.

If I pick a reaction in the newspapers, you may check the NYT movie and article, too.

All the rumors I have heard of were 100% true – and those 50 percent of TRF readers who said Yes Yes Yes in our poll were right – but we still learned some numbers that surprised me.

The event was headed by the director of NSF France Anne-Dominic Córdova. Caltech LIGO director David H. Reitze was the first scientist who quickly announced "we did it" a few minutes after the sound in the YouTube video started at 10:30 DC time. He was followed by Gabriela Gonzalez, the spokeswoman of the LIGO Scientific Collaboration (LSC).

Founders of LIGO, Kip Thorne (Caltech) and the "main" inventor Rainer Weiss (MIT), spoke a lot. The third co-founder, Ronald Drever (Caltech), is unfortunately ill now. Joseph Weber who tried to detect the waves by the Weber bars (he died in 2000) was mentioned. A Russian journalist argued that the idea was stolen from the Soviet Union, anyway. ;-) See John Preskill's article for some history and credits or a LIGO timeline. Kip Thorne had to answer this "Russian connection" question on Russia Today (TV), of course. ;-)

All of the comments at the press event were pleasure to listen to. They have said lots of things, shown various simulations, and played sounds similar to those that the readers of the LIGO category on this blog have been exposed to. Well, but you may still listen to the actual chirp [also: YouTube, II] from the merger (hidden in some noise, just like in the Black Hole Hunter game).


Davide Castelvecchi and Seth Borenstein, two journalists I recently interacted with via Twitter (positively in the first case!), asked questions, too.

Shortly after the press conference started, the discovery paper in PRL (which has already been peer-reviewed) appeared on the web:


It may be useful to rewrite the abstract for you.


I am sure that the data is freely available, but I will reformulate the abstract in my words so that I internalize it, too:


On September 14th, 2015, days after the Advanced LIGO run started, Italian postdoc Marco Drago (from Padua) already observed this event on his screen (in Hanover, Germany) at 9:50 UTC. The frequency goes from 35 to 250 hertz, the peak gravitational-wave strain was \(10^{-21}\).

The distance of the object is \(410\pm 90\) megaparsecs, about 1.3 billion light years (plus minus 20 percent), according to the luminosity, and the redshift calculated from that is \(z=0.09\pm 0.02\). The direction is approximately in the Magellanic clouds (but those are much closer than the observed black hole[s]).

The significance of the signal – which looks nice in a window that is 0.2 seconds long – is the previously mentioned 5.1 sigma. An even more amusing way to express this information is that the false detection rate is "once in 230 thousand years". With this low frequency of false positives, even the Nobel committee should be willing to take the risk.


Eleven other, companion papers were made instantly available.

New rumors say that there exist 7 other candidate detections. Unfortunately, they are weaker than one that was already announced. (To say the least, GW150914 was the strongest signal between September 12th and October 20th.) That's puzzling given the fact that this "strongest one" was detected within days after the Advanced LIGO run began. Well, this discovery actually took place two days before I wrote about the beginning of the Advanced LIGO run. It's actually more puzzling than that. The discovery took place four days before the Advanced LIGO run began according to the official LIGO tweet. And that's despite the fact that during the press event today, Kip Thorne denied that he knew how to use LIGO as a time machine. (More seriously, I sincerely hope that the September 18th start of Advanced LIGO was just some official bureaucratic event only and they had totally OK data for days before that. Science agreed and added details.)

The distance of the source came as a shock to me. Over one billion light years. I expected the distance to be shorter by an order of magnitude, some 100 million light years, perhaps inside the Virgo supercluster whose size is about 100 million light years. With more patience (and the planned 3-fold improvement of the Advanced LIGO's sensitivity), LIGO should see many stronger (closer) black hole mergers as well as the other things that this totally new method to observe the Universe may discover (and cosmic strings aren't impossible). 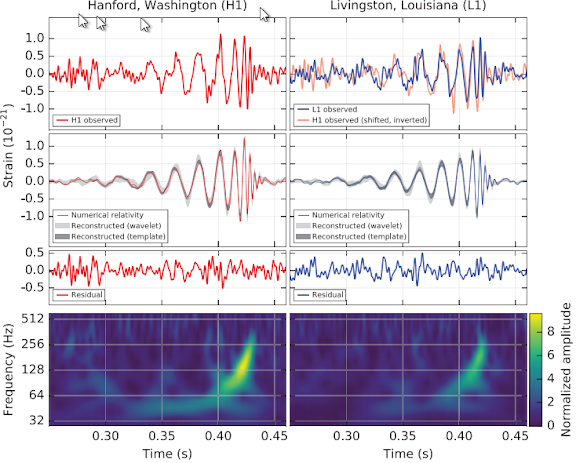 Graphs of the discovered merger taken from the PRL paper. Click it to zoom in. You see that the intensity at the two LIGO clones differs a bit. But the increasing-frequency profile is very clear in both pictures separately – compare the blue picture with the very similar 2010 fake injection – and the agreement between them eliminates any doubt that this is a gravitational wave from a cosmic merger.

Ladies and Gentlemen, a new era in astrophysics – and, if we're very lucky, even in experimental fundamental physics – has begun.


By the way, there are various technicalities they must have mastered but they are bothering me. One of them is that the two LIGO clones' signals shouldn't differ just by the overall intensity and a time delay. They measure polarizations with respect to slightly different axes (a "plus" in Washington state, a combination of "plus" and "cross" in Louisiana) so the precise functions of time may differ as well, right? Appreciate that the incoming signal may be partly circularly polarized, i.e. an out-of-sync superposition of the two "cross/plus" polarizations. I think it would be helpful to have at least 8 clones of LIGO, to measure the location of the source more accurately and to be more clear about the different polarizations.

(The location of GW150914 was determined to belong to a mostly Southern-Hemisphere strip of size 590 squared degrees. Antares and IceCube saw no neutrinos at that moment from that direction.)

Also, the Hubble redshift \(z\sim 0.09\) is "somewhat non-negligible". But it's possible that even if you neglected it completely, you would just produce something like 10% errors in the determination of other parameters which is not too big a deal. After all, the black holes could have some non-cosmological speeds as well. I think that this speed could be confused with other changes of the parameters.


This educator's booklet talking about GW150914 (it's really great when GW doesn't stand for global warming) is nicely colorful. You may also like these eight new computer visualizations of the dramatic event created by black-holes.org.


Before the traffic fades away, you may see the places from which people arrive to this blog – about ten visits a minute when I am writing these lines.


One more comment. On Twitter, I have discussed a potentially puzzling issue with a cosmologist – because I was prepared for that by the same confusion weeks ago, one which I hopefully resolved at the end.

Why does LIGO see anything at all? Do the arms really stretch, and does the wavelength of the laser light stretch etc.? I think that the answer is that one must appreciate the hierarchy between time scales. It takes just 60 microseconds for the laser light to get back and forth through the 4-kilometer arms. That's much shorter than one period of the gravitational wave, so the laser pretty much measures the "instantaneous" proper length of the arms at a given moment and we may neglect the fact that the wave is changing things as functions of time.

A slower process is the gravitational wave, with the period 0.01 seconds or so, which really changes the metric tensor, so the same coordinate differences are translated to oscillating proper lengths. So the proper length of the arms is really oscillating.

And now, the rigidity of the Earth is working hard to return the proper length of the arms to the "normal" equilibrium value. But this process is the slowest one – the signals move by the speed of sound so it takes a second or so to get through the solid materials. So this "sound" simply doesn't have enough time to return the length of the arm to "what it should be" before the gravitational wave makes another change.

Note that it's important that the speed of sound is lower than the speed of light, and the period of the gravitational wave is in between the times needed by sound and by light to travel the distance (size of LIGO).


Some fun: the information was leaked "highly unofficially" months ago. But even on Thursday, an embargo was broken by few minutes by a photograph of a cake (picture).
Luboš Motl v 6:04 PM
Share