Confidence 5.1 sigma, ringdown to a Kerr black hole seen, too
Update: On Monday, 2 pm DC time, LIGO at Twitter has officially announced the press conference on Thursday. An hour later, the LIGO website posted an announcement, too. VIRGO in Italy organizes an event at the same moment, 16:30 Italian time. CERN should do a webcast, too. But please bookmark this YouTube page where the webcast will start on Thursday.
For those of us who "knew" that there would be an announcement of a LIGO discovery (timed to coincide with the publication of their paper in Nature) involving a black hole merger, was there a reason to watch the Thursday February 11th 10:30 am press conference in D.C. (National Press Club)? You bet. As recently as 10 hours ago, we still didn't know some numbers and details that were going to thrill us despite the previous knowledge. 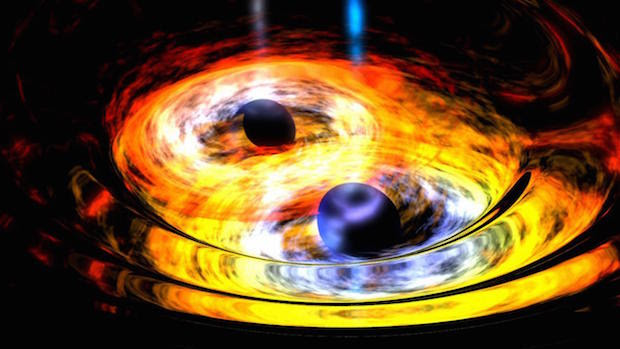 Whenever I was asked why I am still very excited even though it's obvious to me that gravitational waves exist, I forgot to say one important thing. By the detection of the waves, we're not testing just the existence of the waves. We're testing the predictions of general relativity for the unbelievable extreme processes involving black holes, their orbital motion, and their merger. Clearly, I do believe that GR makes the right predictions for all this stuff but even Einstein, the father of GR, refused to believe in the very existence of black holes. Lots of new effects "beating" GR could have taken place, he thought. But he was wrong. There's nothing there – and pure gravity unavoidably becomes the master.

Is there some excitement left for Thursday?

In this case, Clifford Burgess and the Science Magazine have really spoiled much of the Thursday party. But if it's your first encounter with the data, you may experience the shock and awe now.


Here is the translated mail we received:


Dear Luboš, I saw the paper. And by Thursday, do train the English words "inspiral", "merger", and "ringdown" because what we will be told will be spectacular. They will claim to possess the confidence level 5.1 sigma, detection by both LIGO apparatuses, and a correct time delay between them. The masses of the black holes will be 36 and 29 solar masses at the beginning; and 62 for the resulting black hole. The reconstructed orbital speed will be almost exactly the speed of light. As a bonus, they will also observe the "ringdown to Kerr" at the end. Woohoo! [imagine how this word sounds in Swahili!]


Clifford Burgess wanted to keep this information secret so he only sent this data to a mass e-mail list containing all people in his department instead of the whole world. He wanted to nurture the excitement of the students etc. – I agree with his justification.

The detailed features do look way more impressive than "just some detection".


First of all, the black hole masses 36 and 29 times the mass of the Sun are really heavy. Details about their orbital motion, including the nearly maximum speed, have been measured. And they also saw the ringdown at the end!

The full profile of the waves from a 60-solar-mass binary, pretty much exactly one that should be announced soon. Taken from a 2009 paper on simulations. See that the ringdown at the end is visible. This web page should have made a similar "chirp" sound as one in the graph above. Listen to a GW symphony.

As soon as the black holes merge, the resulting body doesn't have the perfect shape yet (by the perfect shape, I mean the geometry that we know from the static solution of Einstein's equations). This out-of-equilibrium object only quickly converges to this final equilibrium by emitting extra gravitational waves. This is known as the ringdown. Those of us who have worked with black hole quasinormal modes know that. There are some solutions that are exponentially decreasing with time and they represent the exponential decrease of the deviation of the real black hole from the perfect, final, stable black hole. (More precisely, a real black hole's perturbations during the "ringing" are superpositions of exponentially decreasing solutions with different "halving times", encoded in different imaginary parts of the frequencies, but I don't want to make this blog post too technical.)


The black hole merger signal is combined with noise. Can you hear it anyway? Try black hole hunter, a game, and be hired instead of computers as a part of the detectors. ;-)


Moreover, the resulting single black hole will have a nonzero angular momentum – not surprising because of the orbital angular momentum at the beginning. And maybe they will be able to see "something" about the relative (intrinsic vs orbital) angular momenta of the two (or one) black holes from the ringdown, too.

But don't overlook some numerological properties of the numbers:\[

\] What does it mean? It means that the mass of the final black hole is smaller than the sum of the initial masses by approximately 3 solar masses. What has happened with this mass? It was converted to energy, via the \(E=mc^2\) T-shirt conversion formula. And into what form of energy were the three solar masses converted? They were emitted in those gravitational waves. There's simply nothing else around the final black hole! And it took place in a few minutes – the last moments of the separate life of the two black holes. (I mention a few minutes to cover 99.99... percent of the gravitational wave energy but most of the energy is emitted within the last second or so.)

If you haven't been amazed by these unbelievable numbers, compare this "power of two black holes" with the power of the Earth+Sun system.

Off-topic: very sad news. A crane collapsed at Manhattan. What is the probability that such a crane kills a Prague-born [see page 27 here], 38-year-old, Orthodox Jewish alumnus of mathematics at Harvard? Unfortunately, in this case, it's 100%. RIP, David Wichs (I don't think I knew the guy, however). The video without beeps and with all the workers' holy šit and fakk terminology is here. Update: Sorry, they added the beeps over there, too. Here it works.

We have these two giant bodies, the Sun and the Earth, that are orbiting the shared center-of-mass. The Earth's orbital speed is some 30 kilometers per second. This motion must emit gravitational waves as well, right? It does. But how much it is?


If you ignore the EU bans, it's enough for two full Edison's light bulbs. Imagine that. All the motion of these two large, well-known celestial bodies is enough to power two light bulbs.

I want to prepare us for the Schwarzschild radius of these beasts. This is just an approximation because the relevant black hole is a Kerr (rotating) black hole, not a Schwarzschild, but it could be an OK figure as an estimate. Well, look at the final black hole.\[

\] The radius (measured from the area of the event horizon) is about 100 miles. The diameter of the beast is comparable to the distance e.g. between New York and Boston. It's crowded by the maximum mass that the laws of physics allow.

You may also estimate the frequency of the pre-merger gravitational waves. The waves are already very strong when the distance between the two initial black holes drops to the radius of the final black hole, some 100 miles. The circumference is some 600 miles or 1,000 km. The speed of light that they nearly achieve is 300,000 km per second so the black holes may orbit each other 300 times a second at this moment.

The frequency is changing with time but at one moment close enough to (but before) the merger, the frequency will be 300 hertz. For our ears, this is a perfectly nice tone – close to the middle D. Note that we were dealing with numbers like \(10^{44}\) all the time but the frequency of the gravitational waves just happens to be a sound frequency we use to sing and talk all the time. The extreme numbers in astrophysics sometimes conspire to produce a mundane value of a physical quantity, too.

By the way, this is almost certainly to be a Nobel-prize-deserving discovery. But in 2016, the LIGO folks may have missed the January 31st deadline for nominations. Well, I actually hope that some intelligent people familiar with the rumors made the nomination (including Kip Thorne?) before January ended, anyway.

Note that I have established a new LIGO category. Years ago, TRF blog posts patiently reported that "LIGO saw nothing" but you shouldn't have extrapolated those bad news too much. Aside from "saw nothing" and "rumors" blog posts, this text published 4 weeks ago contains some extra physics background on gravitational waves.

Also, I recommend you Anthony Zee's textbook on general relativity.