According to a conglomerate of the information from three exclusive sources, the LIGO collaboration is preparing the press conference for Thursday, February 11th, and it will take place on 10:30 am, Eastern Coast Time, in the U.S. Capital.

Geekwire (and Alan Boyle) has mentioned our poll where people have been voting for a few days.


After 281 votes, 34% of the people voted "No" for the rumor. The maximally believing answer "Yes, on Thursday, with black holes" (which I picked, too) was gradually decreasing from 65% at the beginning to 49% right now. "Yes but wrong date" and "Yes but without black holes" have 6% and 11%, respectively. The percentages look totally reasonable to me. I think that "Yes but without black holes" is the most underrated answer but most readers probably can't know that because they don't know where the different pieces of the information come from in detail.

The most unscientific feature of our poll is that the answer "Yes but on a different date and without black holes" is missing. I was afraid of including this fifth answer because it seemed to me that having 5 answers would indicate that I believe that \(2\times 2=5\). But it doesn't. There are two Yes/No questions (on the date and on the black holes) that split the Yes folks. But the No group is a separate one so the number of answers should have been \(2\times 2+1=5\). Oops. ;-)

According to some sources, the press conference will take place in Washington D.C. I believe that it's an indication that it's believed that the discovery will be important for everyone, including those who only follow things like politics. LIGO has almost nothing to do with the U.S. capital. It is a Caltech (California) and MIT (Massachusetts) based collaboration with devices in the Washington State and Louisiana.

Because of the location, it seems plausible that some powerful politician such as Barack Obama will participate at the press conference. If true, this will make the discovery much more visible. The downside is that Obama would be incorrectly linked to the discovery. As you know, Obama's greatest contribution to general relativity is that he's thanked to in a footnote of a crackpot paper titled Curvature of Constitutional Space by Laurence Tribe. 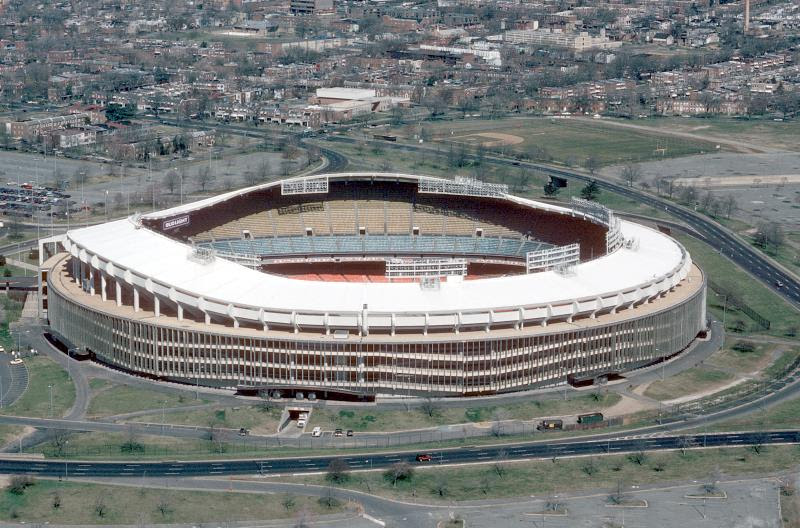 Can you see the deformation of the RFK Stadium in Washington D.C. caused by the gravitational waves? ;-)

So unless the president will convince us that he has detected constitutional gravitational waves in the Oval Office independently of LIGO, Obama's attempt to establish links to the LIGO discovery now would really but really be a case of parasitism. But don't get me wrong. Despite the controversial ethical issue of the credit, I do think that visits of top politicians to such places at such moments are a net positive. Merkel recently visited a fusion facility shortly after it made a somewhat important advance.

Einstein first wrote a paper indicating that gravitational waves existed (because of a very sensible modern linearization of his equations) shortly after GR was completed. As recently as in 1935, he published a paper that said "they probably didn't exist". You may imagine that lots of confusion existed and different people contributed to it differently before the fog disappeared completely. Relatively to Einstein's equations and Einstein's first linearized "Yes" answer, I think that the theoretical contributions of others were minor.

Concerning the experiment, as I have already stated, I do believe that Kip Thorne and Ronald Drever of Caltech and Rainer Weiss of MIT, a triumvirate that founded LIGO in 1992, would be the most sensible folks to get a Nobel prize for the discovery. Relatively to the pioneering steps, I think that all the subsequent work was relatively minor and straightforward. Please feel free to correct me.
Luboš Motl v 11:54 AM
Share