Repulsion of the integers: a sketch of a proof of the Riemann Hypothesis

Will you honestly give me most of the $1 million if you fill the gaps in the incomplete proof below? ;-) I don't claim that I would accept the money but it would be better to have the choice.

Under the previous blog post about the Riemann Hypothesis, Edwin Steiner nicely observed that only the collection of primes as we know them,\[

\] give us the nice wiggly function that suppresses the positive interference. He said that the primes are not just prime: they are "as prime as possible". In other words, the primes are the "primest ones". The choice of the primes above may minimize a certain quantity, the deviation from the optimal primeness. All other "vaguely similarly distributed" collections of numbers that aren't quite prime are doing worse in something.


Why can the primes be described as the "true originals"? What's the most natural, shut-up-and-calculate, constructive way to describe primes? They are the numbers such that all positive integers \(K\) may be written as products of powers,\[

(I introduced new symbols \(M_{p,1}\) etc. where the letter \(p\) only indicates that the following integer isn't a prime itself but rather a label distinguishing different primes – which may be fake primes.)

What's special about the equally spaced set of numbers? Well, if there are electric charges sitting at points \(K\) from the set above and they repel each other (there is a repulsive potential energy \(E\) in between pairs of them), they will try to repel each other to become equally spaced. So define this energy \(E\) in some way as a function of all the "candidate primes"\[

\] Maybe the function contains just pairwise interactions, maybe it also includes interactions that depend on individual variables \(p_i\) only, maybe the charges of \(p_i\) with higher values of \(i\) are smaller to make \(E\) more convergent, and maybe the details don't quite matter.

At any rate, it could be possible to define a natural enough function \(E\) of the "candidate primes" \(p_i\). The choice of the "true primes"\[

\] are where the function \(E\) realizes its global minimum which we set to \(E=0\) (although a subtraction of the "natural value" may be needed to switch to this \(E=0\) convention).

I think that the minimization of \(E\) should explain all the visual effects of the "wiggly function" from the previous blog post as well as other things. So maybe, we understand where the "special power of the true original primes" comes from.

Just to be sure, one may define a generalized zeta function for any set of fake primes (although I don't quite know which of the properties of \(\zeta(s)\) this function obeys). Just use the Euler product:\[

\] This formula may be used even if you substitute arbitrary "fake primes" for the parameters \(p_i\). However, for generic values of \(p_i\), the function will have RH-violating zeroes in the critical strip, even extra poles in the critical strip, and will refuse to obey the \(s\leftrightarrow 1-s\) functional relation (or symmetry). I am not sure whether the function above may be unambiguously continued to the whole complex plane.

Now, assume that this function may be extended and written in terms of some "fake roots" of the "fake zeta function" above. If that's not the case, then it's likely that this attempt to prove RH collapses. The Riemann zeta function may be written as a product from the nontrivial zeros, up to a rather simple factor:\[

\] The product over roots \(\rho_j\) has to evaluated as a limit of a partial product where we add the factors with the growing \(|{\rm Im}(\rho_j)|\), i.e. we have to add the roots by pairs. Now, another "Big If" is that the previous zeta function\[

\] In other words, the precise values of the "fake primes" may be translated to the precise values of the "fake roots" of the fake zeta function. This map between "the set of primes" and "the set of roots" looks like a map between two dual lattices except that the sets aren't lattices. More precisely, we need to take the natural logarithms \(\log p_i\) of the primes which are "complementary" to the roots in a similar sense as the momentum and winding in string theory. 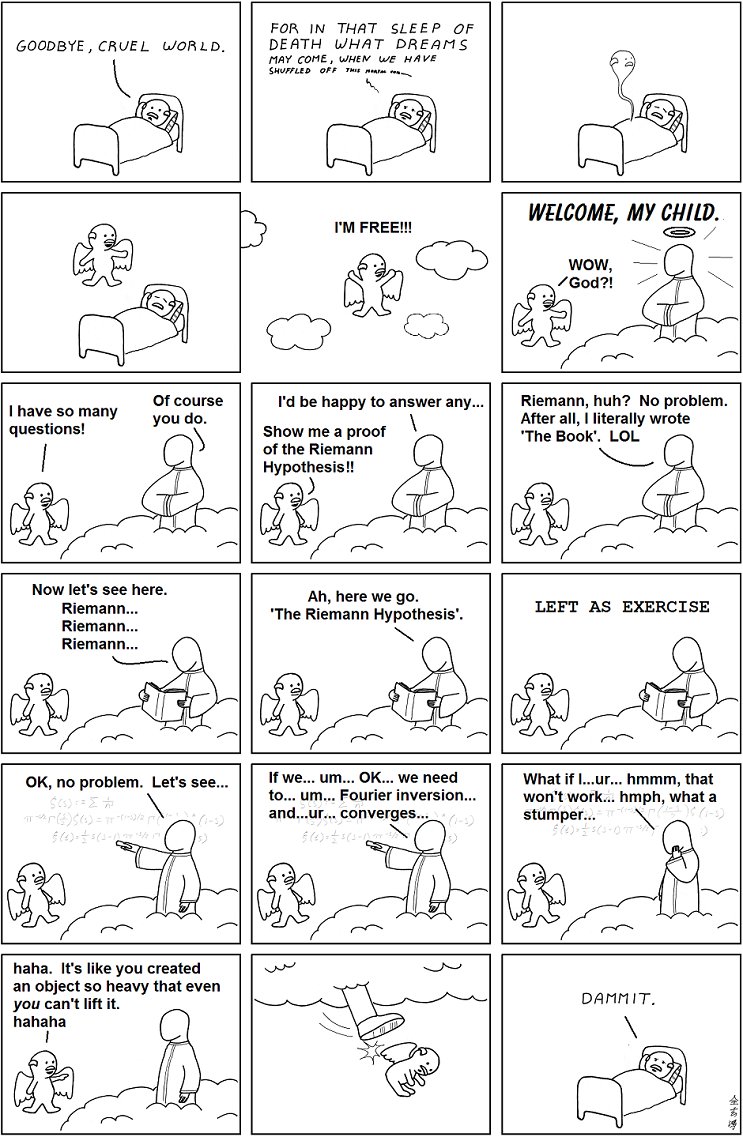 (This should be done by methods similar to the quasi-Fourier expansion with the frequencies \(\log(p_i)\) on the critical axis – or the vertical axis with a root – discussed in the previous blog post.) Maybe you need to allow the locations of trivial (and not just nontrivial) zeros (and maybe the singularity at \(s=1\)) to be moved as well to fully match the Euler product from the given "fake primes".

I think that we avoid various confusions if we include all the roots \(\rho_j\), including the "mirror ones", and treat all of them as independent complex variables. For RH-compliant nontrivial zeroes (those on the critical axis) \(s\), they are paired with another root \(s^* = 1-s\). For the hypothetical RH-breaking nontrivial zeroes \(s\), there are four distinct zeros in a group related by symmetry,\[

If the set of "fake roots" \(\rho_j\) is invariant under complex conjugation i.e. if it contains a \(\rho_j^*\) along with every \(\rho_j\), then the corresponding "fake primes" \(p_i\) will be real (at least in some vicinity of the true primes and true roots). And for these real locations of candidate primes \(p_i\), the potential energy \(E\) will be real, too.

So the invariance of the "set of candidate roots" \(\rho_j\) under the complex conjugation may be assumed almost everywhere – that's what is related to the reality condition for the primes. On the other hand, for general "fake primes", I believe that the fake zeta function won't obey the functional relationship exchanging \(s\leftrightarrow 1-s\), so in general, the fake primes won't be translated to fake roots that are symmetric with respect to the critical axis.

How do you complete our proof of the Riemann hypothesis?

You consider the vicinity of the "true primes" \(p_i\) and the corresponding "true roots" \(\rho_j\) and investigate the infinitesimal variation of the latter. If the dictionary works at all, the variation of a particular \(\rho_j\) may be translated to a variation of all primes \(p_i\).

The RH-compliant roots are like half-D-branes that are stuck on the critical axis. They can't move away. If the critical axis reduced the unitary gauge group of D-branes to the orthogonal one, a single regular root of the zeta function would carry the \(O(1)=\ZZ_2\) gauge group. (I actually do think it makes a deep sense to consider the roots to be locations of D-branes, or eigenvalues of a random matrix. The distribution of the roots follows the patterns of random matrix theory.)

On the other hand, if there were an RH-breaking root \(\rho_j\) away from the critical axis, it could move in the whole plane, like a full D-brane that carries the \(U(1)\) gauge group. And I think that this extra freedom of the roots that have partners on the other side of the axis has consequences.

So with the extra optimistic assumption suggested in the previous paragraph, the second-order terms in \(\Delta E\) behave like\[

It means that the RH-breaking roots are "too loose" and allow you both to increase or decrease \(E\). In other words, an infinitesimal variation of such roots would allow you to find


candidate primes that are even primer than the true primes


which is a contradiction. With a fully specified definition of \(E\), it should not be hard to show that the true primes produce the most equally spaced set of the products of powers. There can't be anything better! But the loose primes away from the critical axis give you some room for an improvement, so these RH-violating primes cannot exist.

I must warn you that there is another possible lethal defect of the project here because there is some sense in which I need to assume that the set of roots \(\rho_j\) remains invariant under \(\rho\to 1-\rho\) or \(\rho\to 1-\rho^*\) at all times. Otherwise I would be able to find the numbers \(p_i\) that are "primer than primes" even out of variations of the RH-compliant zeros. But I have previously stated that I believe that for general "candidate primes", one breaks the \(s\leftrightarrow 1-s\) symmetry of the zeros.

Well, while this looks like a lethal problem, there is a very small but (subjectively) nonzero chance that there's something optimistic that I overlook here – or a slight variation of the sequence of thoughts that works equally well – and the fixed argument makes sense and you will be able to turn this blog post into a rigorous proof.
Luboš Motl v 7:20 PM
Share