Since the Nigerian zeta-function scam in November 2015, I have spent dozens of hours with the Riemann zeta function, its various physical representations (and QFT and string models designed to capture its behavior), and attempts to prove the Riemann Hypothesis. 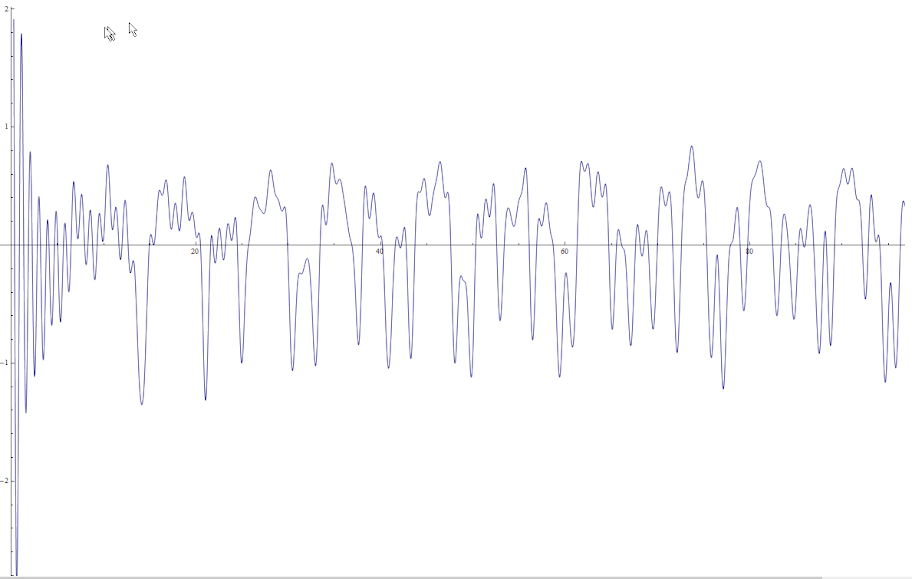 Much of it is too abstract, advanced, or classified. However, there are many things that may be shared without problems.


Well, there is one. Click at the image of the graph above. It was created by the Mathematica command


Some of you may prefer mathematics over Mathematica.


In mathematical notation (\({\rm\LaTeX}\) typeset via MathJax), the function above is\[

\] It's a rather simple function, isn't it? No complex numbers were used at all. We have some Fourier expansion but the frequencies aren't multiples of the same ones. Instead, the frequencies we use are logarithms of primes. We combine them and the amplitude is \(\sqrt{p_n}\), the square root of the \(n\)-th prime.

Look at the graph. For low \(x\leq 10\) or so, the function oscillates many times (the ringing of a black hole) but then the function \(f(x)\) sits mostly in between \(-1\) and \(+1\). However, there are some statistically significant deficits, the sharp local minima. When you measure the value of \(x\) of these sharp local minima, you get very close to the nontrivial roots of the Riemann zeta function.

\] These two formulae for the zeta function are equivalent for a simple reason. The positive integer \(n\) may be uniquely rewritten as a product of powers of prime\[

\] and the summation over \(n\) may therefore be rephrased as a summation over the non-negative integer exponents \(M_2,M_3,M_5,\dots\). However, \(1/n^s\) factorizes to a product from the individual primes as well. And the factor contributed by each prime is a sum over \(M_p\) that may be summed as geometric series.

Fine, you need to think a little bit.

What's funny about the graph is that while cosines are upside-down symmetric, statistically speaking, the graph isn't upside-down symmetric. If you interpret \(f(x)\) as a stock index, you see that there are very sharp drops of the markets followed by very speedy recoveries. On the contrary, when the stock index is above zero etc., it tends to be more constant most of the time.

Do you have a simple explanation why this sum of cosines of "random" arguments – which should be numbers between \(-1\) and \(+1\) making no preference about the sign – end up breaking this \(f(x)\leftrightarrow -f(x)\) upside-down symmetry? It has to be so because the zeta function has zeroes but no poles on the critical axis. But while I could prove the result, I still don't have a fully intuitive explanation. Do you have one?

\] Imagine how excited the numerologists would be. The sixth root of the Riemann zeta function exists because two primes, 43 and 71, are "almost synchronized" after 22.5 and 25.5 \(e\)-foldings, respectively.

Except that when you look for similar "unusually close" encounters to the cosines equal to \(-1\), you won't get any excess at all! The assumption that the phase is random continues to be fine for the phases coming from the Riemann zeta zeroes.

I didn't read the amazing papers by LeClair carefully – but he managed to calculate the googol-th root of the Riemann zeta function with the precision of 100 significant digits. And he uses functions very similar to my \(f(x)\). Someone has made at least some of the games of mine and got much further than I did. Note that for large enough primes (and therefore large enough frequencies), the cosines become random indeed and the summation resembles a random walk. The total path traveled by Brownian motion after \(T\) steps goes like \(T^{1/2}\) which is really why (a more complete argument could be inserted here) the real part of the roots of the zeta function are equal to \(1/2\).

In mathematics, there exist relationships (and I am especially talking about approximate identities) that are deep and important, and those that are coincidental. By definition, numerologists are those who are excited by both group but they can't quite distinguish between them. One must distinguish them carefully. I believe that while many properties of the zeta function indicated by approximate calculations are "morally true", e.g. the coincidences for the numbers 43,71 above are purely accidental.

\] and many others. The accuracy of such relationships looks cool but it's not "insanely unimaginable". You get about 7 digits correctly out of an expression that has 7 symbols or so. Well, \(e^6\) has about two symbols but it's just calculated to be \(403.4288\), and we look for other representations of that number and find one, \(\pi^4+\pi^5\), that has five symbols but they're "more than decimal digits" so it's equivalent to seven digits or so, anyway.

At some moment in the future, I could discuss \(p\)-adic string theory; compactification of string theory on the quotients of real and rational numbers, and other things.
Luboš Motl v 7:38 PM
Share