First, I urge all readers who could be allergic to political topics or who are staunchly pro-immigration to stop reading now. I haven't written about this issue for quite some time but the situation keeps on evolving. Weeks ago, it looked like the European Union would demand Greece to fulfill its obligation as a border country of the Schengen Area within weeks – or be expelled. Now, it seems that Greece has gotten additional three long months (and this deadline is likely to be ignored, anyway). Clearly, in Brussels, there are no adults in the room. There is no one powerful in the EU who could interact with the lazy Greek Bolsheviks in the appropriate, stringent way.

Meanwhile, Angela Merkel continues to be the German Chancellor and the illegal migrants keep on flowing to Europe en masse (about 77,000 from the beginning of the year, counting just the Turkey-to-Greece migrants).


What are Merkel's plans to deal with the situation? Concerning the sex attacks by the "refugees", Merkel will convert the misogynistic migrants. This sounds like a joke but she must be serious. You know, Frau Merkel, you can't do that. This is their natural behavior they have learned as kids in the same formative age when you decided that German would be your native language.


And what is her plan to reduce the influx? She wants to convince Turkey to help Europe in reducing the influx. Now, there are millions of migrants in Turkey right now. (It is not such a big deal – Turkey is a Muslim country "in between" the civilizations so it's much more natural for many Muslims to be in Turkey than in Europe proper.) Most of them want to go to Europe, Turkey wants to get rid of them – and Merkel assumes that Turkey will work hard to keep these people? It's enough to be patient, Merkel says. Another good joke. This kind of a wishful thinking is nothing else than a symptom of her absolute detachment from reality.

The governments of the Visegrád Group (V4: PL, CZ, SK, HU) are not doing too much about the European problem but they're at least talking about sensible solutions. So on Monday, V4 leaders will meet in Prague and they will discuss the protection of mainly the Greek-SlavicMacedonian border i.e. a method to protect a more reasonably defined European space, one including the Slavic Macedonia and Bulgaria (not members of Schengen now), from the realm of uncontrolled mess, one that is clearly including Greece these days.

German media (Welt, Spiegel...) talk about the looming direct confrontation between Berlin and Visegrád. (They talk about the "revolt" of V4 against Merkel, a point that is universally mocked by the Czech media's commenters aware of the fact that Merkel's political power in our region is zero – although someone probably wants to believe otherwise.) Slovak prime minister Fico is quoted as saying that he has received an angry demarche from Germany saying "How do you dare to talk about the protection of the external borders with Bulgaria and Macedonia?" But Fico stresses that he won't silently watch as thousands of illegal migrants are arriving. There seems to be a consensus in V4 about this point. Because Greece is a dysfunctional, failed state, European countries have to defend the integrity of their European territory at different contours – namely Greece's borders with Bulgaria and Slavic Macedonia.

(The Czech government stated that it is not aware of any German objections against the V4 summit.)

The whole Visegrád Group has a smaller population (and certainly economy) than Germany and one could say that by directly clashing with Berlin's plans, the Central European countries could be fighting against a stronger foe. But one should appreciate that V4 is far from being isolated these days. French PM said that France disagreed with Merkel's plans which are unsustainable. France is largely opposing the quotas these days. 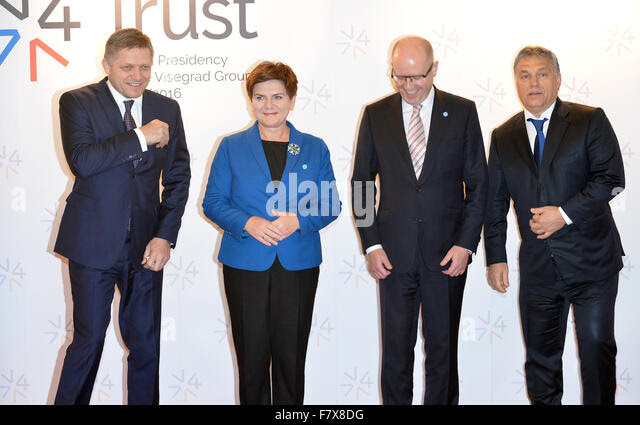 In 1991, Visegrád was largely encouraged by Western Europe that was implicitly saying "try to play the integration games regionally, we're not eager to team up with you". The V3 and then V4 members were never thrilled about the group that seemed largely artificial due to the differences between the countries etc. Ironically or perhaps unsurprisingly, a geopolitical problem – the migration wave – made V4 sort of meaningful as a bloc.

It is increasingly clear that Austria is getting realistic and closer to the V4 attitudes. For example, it will impose a cap on the refugees and deport the rest. Austria seems to plan to help Macedonia with the protection of its borders, too. And within Germany, Bavaria – arguably the wealthiest Bundesland – is increasingly separating itself from Berlin. Bavaria could very well secede from Germany and perhaps join the Visegrád Group. ;-) And even in the rest of Germany, many politicians – including Alex Schäfer, an influential lawmaker from SPD – demand the closure of the Balkans route, just like V4.

Just to be sure, there are also insane people who support Merkel's behavior. This list includes John Kerry, an unhinged secretary of state of a faraway Western country. To compare, Russian PM Medvedev said it was "simply stupid" to open the EU borders.

Greece's borders with Slavic Macedonia (FYROM) and Bulgaria are planned to become the new de facto external border of Schengen (e.g. of the EU). Migrants aren't using Albania yet. Bulgaria is protecting its short land border with Turkey and should complete a new fence there next month.

Things were a bit silent for weeks but the controversy may be revived rather soon.

Note that in Czechia, the prevailing opinions about the migration wave are considered common sense to the extent that even people with the Middle East ancestry seem to actively agree with them.

Amiri studied medicine here in Pilsen but he returned to music – and moved to Prague. He established a private skin medicine clinic in Prague, too. He tried to return back to Iran a few times but he found out that he was missing Czechia a lot, not only because of the political freedom here, so we have him back. He said that he is a Muslim just like his mother was one – but she was always a nice person and he has nothing to do with the violent Islam etc. So Gene, we also have folks with this diluted and harmless, "Californian", Islam here.

Amiri remembers that mass immigration to Iran was a problem for that country as well and he doesn't want to allow it in Czechia, either.

Off-topic: On Friday, some museum workers in Prague have found a composition written by Mozart and Salieri together that was missing for 200 years. The two men actually respected each other. The idea about their lethal rivalry is a myth based on the widespread but not universal animosity between Italian and German musicians.

Architect (and once good friend of Václav Havel) Bořek Šípek died today at age of 66. Among more important projects, he was the mastermind of Pilsen's most prominent apartment building, the Ehrlich Palace.
Luboš Motl v 8:12 AM
Share