What gravitational wave astronomy may hear

On Monday, LIGO finally officially admitted that there would be a press conference tomorrow, as we predicted in the poll, at 10:30 am, in the National Press Club, a gentleman journalists' building that is very close to the White House. In 2011, I embedded a talk that the Czech ex-president Klaus gave there. Oops, it was one in Canberra but who cares. ;-)

LIGO's colleagues in Italy, Virgo, should hold an event at the same moment, i.e. 16:30 Central European Time. This should also be webcast – and there are hints that these people will actually be at CERN, not in Italy, and the webcast will actually be aired via webcast.cern.ch, too.


But you should already bookmark this YouTube page on the NSF channel where webcast will start in 29 hours. See also an NSF press release.


Incidentally, the arXiv already boasts a theory paper about the first black hole mergers detected by LIGO. ;-) It seems clear to me that they pretend to be ignorant of some numbers that they actually know.

Our latest blog post on LIGO has 12,000 views so far (and 1,000+ Facebook likes LOL) and there are lots of other responses by the media to the tomorrow's event that is gaining the official status these days. An unusually intelligent article written by David Castelvecchi appeared in Nature:


Like your humble correspondent and Bill Zajc, Castelvecchi points out that the discovery that will be announced tomorrow is much more than a confirmation of the gravitational waves – something that good physicists had no doubt about. It's also an excellent source of information about the detailed physical processes that have emitted the waves. And because the black hole merger that has been seen isn't the last event that people will have observed by gravitational waves, we may "hear" lots of new information through the gravitational wave detectors in the future.


Castelvecchi mentions six (a number he translates as 5 into Arabic numerals LOL; update: DC fixed it) physical phenomena that the gravitational wave detection may clarify:
Let me add a few more words.


At least since the 1960s or so (when Wheeler coined the catchy term "black holes"), it was rather implausible to suggest that black holes didn't exist – the mastery of the theory as well as the emerging experimental evidence got way too strong more than half a century ago. But you may still find lots of people, e.g. the 2005 TRF guest blogger George Chapline, who like to say that black holes don't actually exist.

Tomorrow, these suggestions will probably become really-really indefensible (so far they were only "really indefensible"). The agreement between the gravitational waves predicted from the black holes' inspiral+merger+ringdown by general relativity, and those observed, will be so precise (despite its dependence on the events in extreme conditions where all the nonlinearities of GR matter intensely) that people suggesting that there is any large mistake in the general relativistic description of these black hole phenomena will probably drop out of the fringes of science.

Lots of questions about black holes – especially about their quantum behavior – will remain murky or open. String theorists' research of quantum properties of black holes will continue pretty much independently of the LIGO discovery. But the black holes' macroscopic behavior may be almost as accessible as the Moon's surface.

A one-minute video: LIGO - What is a Gravitational Wave? from Kai Staats on Vimeo. A 20-minute video is here.

There are many special characteristics of black holes. They're the simplest, most determined and smooth, astrophysical (by size) objects in Nature macroscopically. Because of the no-hair theorem and their general uniqueness, they carry the minimum amount of "personality" macroscopically. On the other hand, they carry the maximum amount of microscopic, quantum information (or entropy) in them – relatively to all objects of the same size. Their density calculated from the mass and the event horizon radius is "maximal" among all the objects; but the local density of matter is "minimal" (basically zero) among all astrophysical bodies. And so on.

This is why the black hole merger, if it is announced tomorrow, will be one of the strongest methods to confirm what we believe about a theory, in this case general relativity. One more confirmation will become possible if and when LIGO/Virgo detects an event that may also be seen optically. If an event will be both "seen" and "heard" (the verb we should use for the detection by gravitational wave astronomy – the similarities between regular sound signals and the LIGO signal is hard to overlook and the 2 LIGO detectors really behave as 2 ears, even when it comes to the way how they estimate the location of the source etc.), we should be able to verify that the speed of the gravitational waves is the same as the speed of light in the vacuum, \(c\). I am confident that it's the case. Even relatively small deviations would be rather shocking from my viewpoint because the Lorentz symmetry would have to be broken (perhaps spontaneously) in some way. 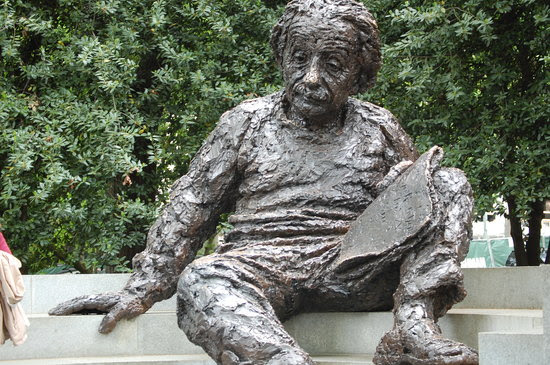 Einstein's memorial in Washington D.C. Will they bring the man to the National Press Club? ;-)

But then there is another, perhaps even more important motivation for the experiments. We also want to learn new things – answers to questions that we're genuinely uncertain about.

Castelvecchi has mentioned four possible discoveries that may be made with the gravitational wave detectors in the future: rugged neutron stars, cosmic strings, events that ignite supernova explosions, and new methods to measure the expansion of the Universe.

The mountains on neutron stars sound both "sufficiently unexciting" for me – as well as probably "too weak signals". Neutrons stars, like black holes, may merge and the emitted waves could be just a little bit weaker than the gravitational waves from the black hole mergers. But these 10-kilometer neutron stars may also have 1-millimeter "mountains" on them and the spinning involving such inhomogeneities is predicted to emit gravitational waves, too. I just feel that those must be extremely weak – unless the neutron star is extremely close, of course. And when it's close and the "waves from the neutron mountains" are strong enough, I have no idea how I would distinguish this signal from many other sources.

The two topics Castelvecchi mentions that are directly relevant for truly fundamental physics are the new method to measure the expansion of the Universe – from the absolute loudness of some neutron star mergers, we are told – and especially the cosmic strings. 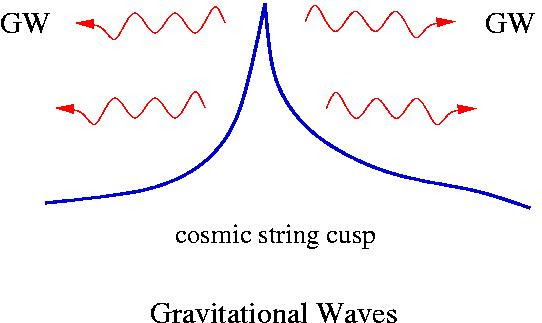 About 10 years ago, there was some moderate excitement that the cosmic strings could have been detected experimentally. Joe Polchinski quantified the probability as 10% – he already calculated Bayesian probabilities at that time. ;-) I still think that the number was fair.

I think that there is no "clear signature" (like the black hole inspiral-merger-ringdown curve) because the detailed shape of the cusp is basically undetermined, dependent on many random variables. But there could be some approximate features of the gravitational wave signal – some scaling laws etc. – coming from the cosmic string cusp that could be predicted and (if Nature is really generous) experimentally confirmed.

I don't have to explain to you how revolutionary the detection of cosmic strings would be – just to be sure, I still do think that the probability that this event will take place in the 21st century is below 50 percent. Cosmic strings are predicted by string theory as well as by various grand unified theories (but the leftover cosmic strings' number in the visible Universe is often predicted to be too tiny to observe them). In many string models, the fundamental string may be literally stretched to astronomical distances and behave as a cosmic string – but locally, it's made of the same "stringy stuff" as the vibrating strings inside all elementary particles! And various other branes wrapped on cycles of the compact dimensions may produce additional kinds of cosmic strings in other string vacua.

Grand unified (quantum field) theories are enough to predict cosmic strings, too; they're topologically nontrivial field configurations analogous to other solitons (e.g. magnetic monopoles). Rather generally, there is a monodromy on the configuration space that is induced by the circular journey around the cosmic string. Depending on the monodromy transformation, you may get different types of cosmic strings.

Unlike the LIGO detection of a black hole merger, these observations are (potentially unlikely) speculations about a distant future at this moment. But they may occur at some moment and the implications for physics would be profound.

Whatever "sounds" will be detected by LIGO/Virgo (and later eLISA) in coming years, our ability to detect these gravitational waves will give us so much more than just the certainty that gravitational waves exist! The discovery of gravitational waves by LIGO isn't just the end of the 100-year-long waiting for their detection; it is mainly the beginning of a new era of our observations of the Universe. For the first time, the Universe won't look mute – because we won't be deaf anymore.

It's an important development. You shouldn't be surprised that Latvia has already declared the LIGO holiday to be its most important holiday in the whole year. ;-)
Luboš Motl v 8:52 AM
Share