The silence surrounding the scandal of the Czech finance minister's fraudulent $2 million EU subsidies is deafening, especially in comparison with the tiny sins that were apparently enough to remove some governments in the past.

The rabble has apparently chosen its new king, the Slovak billionaire Andrej Babiš, who fights against the richer and prettier neighbors of the members of the rabble. And that's why this rabble forgives everything to this giant aßhole, including his unusual wealth.

Years ago, billionaire and former communist snitch Babiš boasted that the Stork's Nest was the best invention in his life so far. He was waiting in a line in the Prague zoo with his kids to feed the goats and because he's impatient, he decided that he had to build something similar which would belong to himself. Adolf Hitler built The Eagle's Nest so Babiš found it appropriate to invent the Stork's Nest for himself.


It's a fun construction for horses, next to a luxurious farm and housing. See Google Maps, Mapy.CZ, Google Images, The Farm's Web. I guess that once you have billions, it's not hard to invent and build "creative" things like that.


In 2006, the construction began in the former Semtín Yard. (The name "Semtín" is the same as the suburb of Pardubice where the famous Semtex explosive was developed, but it's a different place.) In 2007, the so far transparent asset of Babiš was reregistered into "anonymous stocks" which made the owner invisible. ("Anonymous stocks" are no longer allowed because the lawmakers decided that they were encouraging economic crimes.)

In 2008, the company renames itself to The Stork's Nest (in Czech) and Babiš is not listed as a stockholder anymore. The main stockholders are officially Mr Knotek and Ms Knappová, with clear ties to Babiš, and the board is composed of a Ms Jana Nagyová from Agrofert, Ms Adriana Bobeková which is almost certainly Babiš's daughter from the first marriage (even such things are not 100% publicly known), and Mr Martin Herodes, the brother of Babiš's current sex toy Monika (she adopted his surname even though they haven't married).

In 2009, The Stork's Nest asks for the third part of the CZK 54 million subsidy ($1 = CZK 25 now). The company violated some law by demanding a subsidy before it made a payment. Later, this wrongdoing was interpreted as "just a paperwork glitch" by the company. In 2011, the company is urged to pay a CZK 3.8 million fine. The company immediately claims to be forgiven the fine. It's in a bad financial situation (!). With interests, the fine grows to CZK 6 million. But in 2012, 99% of the fine is suddenly forgiven.

Babiš's statements are not just clearly untrue but downright comical. Babiš claims that he has lent CZK 400 million ($16 million) to the owner of the Stork's Nest – which isn't himself, he claims – but he just can't remember who has received that loan. Oh, great. So the finance minister just gave away 400 megacrowns to someone but he just doesn't know who was that? ;-)

(Later during the weekend, an attorney found an article in The Beekeeper, a magazine about bees, where Babiš boasted – during the period when the stocks were "anonymous" and he currently claims that he wasn't the owner at that time because that's when the subsidies were applied for – that he would import a panda to "our" farm. Also, the Stork's Nest website has belonged to Babiš's Agrofert without interruption since 2006 or 2007. And in 2013, before the moment in 2014 when Babiš claims to have bought the farm from someone else, he made the half-Czech half-Slovak Husák-style tweet above where he says that his life and politics experience has assured him that the best place to live is "his" farm because the animals are not lying jerks.) 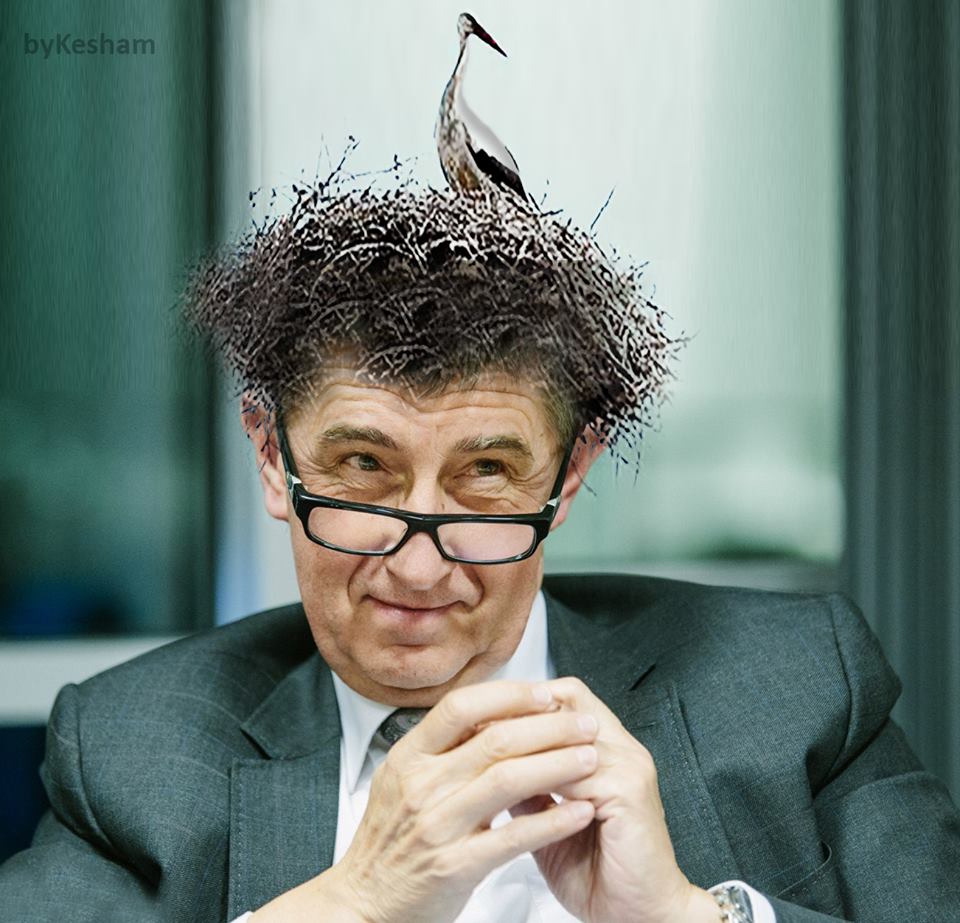 Babiš lied that there has never been any problem found with the CZK 54 million subsidy. That's obviously a lie – the owner was ordered to pay a CZK 3.8 million or 6 million fine which was later reduced but not to zero. He has lied that the company hasn't belonged to him.

But the key crime is obviously something worse than these two lies.

The key crime is that he shouldn't have gotten the subsidy. The subsidy was designed for small and middle-sized company and Babiš is a billionaire owning the largest food industry and agricultural corporation in the country. (The subsidy also demanded the project to be "helpful for the environment", which the Stork's Nest isn't, either, but that's just another detail.) He has obfuscated the actual owner of The Stork's Nest – which was always himself – in order to receive over $2 million dollars from the European taxpayers.

The Czech police and some other Czech and EU institutions investigate this apparent fraud. But in the Czech public, there exists virtually no political demand to draw consequences out of this apparent foul play. Except for the opposition parties – and, to a very limited and uncertain extent, social democracy, Babiš's coalition partner – no one even calls on Babiš to return those $2 million he has stolen.

Well, the investigation is taking place at many places and there will probably be a special session of the Czech Parliament so Babiš has some chance to be removed from the government – and maybe placed in a nice prison. But what shocks me is that the people who think that this is what should happen are in an apparent minority.

It's exactly the same populist aßhole who has received a big support in the elections by screaming hostile lies about all other politicians, entrepreneurs, self-employed people, and their alleged economic crimes, corruption, and tax evasion. It's the same Babiš who has screamed that "presumption of guilt" should be applied to politicians. And now, when his own guilt is spectacularly obvious, he pretends that he is a victim and there's nothing to be found – and millions of Czech immoral voters and idiots apparently buy this Babiš' rubbish (the two words rhyme, just to be sure).

Babiš often says "I sacrificed so much and went to politics" and many idiots buy it. Oh, really? Babiš just was no longer satisfied that his power ended with the limits of the economic realm and he wanted the political power, too. As a classic communist snitch, he is excited when he has the power to cripple other people's lives, add them duty to fill control statements, use new electronic cash registers, and pay huge fines if they make a mistake. And millions of losers who support this evil man have the same priority. They are more happy about their neighbor's problems than about their own success. If that was such a big sacrifice to become politician, Mr Babiš, why don't you just go away?

Because this ex-communist snitch who would have been executed in 1989 if we have avoided the excessive velvet has earned a few billion dollars, does it give him the right to steal millions of dollars? Or unlimited funds? Or does he have the natural right to be the dictator who owns the country as if it were his "family company", as he often explicitly describes the ideal arrangement of a country? It's just stunning. When someone does bad things at a very big scale, many people – the scum that supports Babiš – suddenly get totally blinded.

The center-right government of trained plasma physicist Mr Petr Nečas was removed by police in 2013 due to a triplet of seemingly unrelated, bizarre, and in any way minor, accusations by two police investigators. Three years later, it seems that the only "crime" that was enough for the collapse of Nečas's government was that Jana Nagyová (now Nečasová), Nečas' lover at that time (now a new wife), has received several nice purses as gifts.

His secretary's purses were enough for the end of the political career of Mr Nečas. But when it comes to Mr Babiš, it's just OK to fraudulently receive $2 million in subsidies? Suddenly, no one cares. The scum who loudly defends Babiš's demagogy about the "fight against the economic crime" (such as the reduction of taxes paid by a rural pub that would go bust if it were forced to pay a little bit more) suddenly sees nothing wrong about his explicit stealing of millions of dollars from our wallets. And indeed, the stolen money for the Stork's Nest is just a tip of an iceberg. Babiš is receiving more money in subsidies (e.g. because of biofuels he grows) than what he is paying in taxes. Billions of our crowns are wasted on this aßhole.

Mr Petr Nečas wasn't the only prime minister who was removed for reasons that are absolutely negligible relatively to the scandal of Mr Babiš. Young but now late (Hawking's ALS) social democratic PM Stanislav Gross had to resign in 2004 because he didn't give a good explanation about the origin of $50,000 used to buy an apartment. He accumulated much more money afterwards but he fell because of some unclear $50,000. No well-defined theory about the criminal way how he got those $50,000 has ever surfaced. For Gross' political career, fuzzy $50,000 was fatal, but for Mr Babiš, a clearly fraudulent reception of $2 million is OK?

And I could go on and on and on. In Fall 1997, prime minister Václav Klaus' government collapsed – this forced resignation is known as the (modern) Sarajevo assasination because Klaus was just visiting Sarajevo – partly because of fictitious names of two donors of Klaus' party. Even if something were dirty, the money just helped the whole party, not the politicians personally.

But the Stork's Nest was built out of the subsidies as Babiš's personal luxurious villa. Am I the only one who realizes that because of this direct material benefits for the person and his direct participation in the fraud, it's much worse than all the previous examples?

Decades ago, I just couldn't understand how the people in the Soviet Union or the Third Reich could support folks like Stalin and Hitler, among others. Well, I still don't really understand it – it's so shocking – but at least, I do realize that those Hitler and Stalin eras (among other dictators' reigns) were no anomalies at all. A huge portion – and maybe majority – of my nation and many other nations (and maybe all nations) are people who either completely lack any trace of morality; or they are completely unable to fairly compare different situations in politics.

If this particular criminal isn't liquidated in time, we may become witnesses of the rise of another flabbergastingly arrogant dictator. The imbeciles who think that he is a politician sending our country in a good direction and who vote for his ANO are surely numerous enough to allow this aßhole to place himself above all the citizens who morally and intellectually surpass him. The outrageous behavior of Mr Babiš towards the opposition in the Parliament – the politicians who represent me and millions of other honest people – is a sufficient warning.
Luboš Motl v 2:57 PM
Share