Mr Jan Procházka [John Walk, the 2nd most widespread male given name and the 6th most frequent Czech surname] is a Czech inventor who has worked for Altair, a battery producer, in Nevada where they have utilized some his patents. Electric buses produced by Škoda here in Pilsen use his design, too, just to make you sure that this man has made things that really work and he's no Czech Andrea Rossi. ;-) 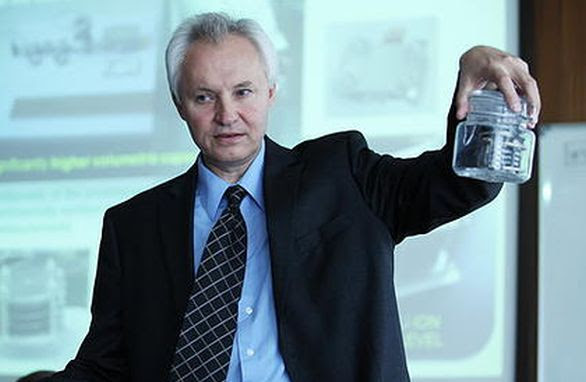 But since 2015, the Czech media have talked about his purported game-changing invention.

Procházka is the CEO of HE3DA and he's been looking for an investor who would allow him to build large batteries according to this invention. A week ago, Chinese businessman Chu Juan Pin agreed to pay €50 million for a 49% stake in a company that will produce these batteries.

In this counting, the company is worth about €100 million but the Chinese investor should pay this amount by itself and I am confused by these financial details.


After he returned to the homeland in 2005, Procházka has so far worked in the Prague's suburb of Letňany [Flyvilles] but the first plants should be built in the less developed North Moravia (namely in Horní Suchá [The Upper Dry Village – what a great name for a new capital of technology LOL]) before they will expand to the whole world if they will. The stop-and-start batteries for cars should be the first ones to be made.


According to some precise definitions, the capacity of Procházka's battery is 20 times higher than that of the best existing lithium batteries. As I said, Procházka doesn't propose any cold fusion or another paradigm that is too good to be true. In fact, he doesn't even leave the lithium.

But he does use concepts from nanotechnology to improve the lithium batteries. His batteries are "3D". Using a fine trick, he can replace the galvanic cells, which were vertical, by horizontal cells pressed into the frames as if they were tablets. This different geometry with much thicker electrodes is said to increase the capacity 20-fold (and, similarly, speed up the charging times by similar huge factors) although I don't claim that I understand the logic or physics of that claim.

This page contains an interesting table with numbers quantifying how good the product should be, depending on the adjustable thickness of the electrodes, according to his lab measurements. The round trip efficiency is always said to be 98% (round trip).

The numbers don't look "shockingly good" to me but they may be better than the competition. I have no idea whether these products will really lead the market – and there exist pages with some extremely skeptical comments that look somewhat qualified. He3Da has gotten about nine patents in recent years and we've seen no revolution around us yet. But what I would find extremely problematic is to make an investment that can only produce billions of batteries using a fixed design and technology, especially a well-known old one.

I do believe that similar nanotechnological (but also choice-of-material) advances will improve the batteries substantially. For this reason, I do think it's a good idea for Elon Musk to train how to wash dishes.
Luboš Motl v 4:56 PM
Share