The Alternative for Germany (AfD) led by chemist Frauke Petry (you have to be a female chemist if you want to be an influential German leader these days; Frauke only failed to invent the Petri dishes because her mother waited for the birth up to 1975) succeeded in recent regional elections in 3 German bundeslands. It scored between 12 and 25 percent and about 17% in average, the same percentage I mentioned as an estimate of their power in January before I was challenged by a German PC critic named Skepsis:


Dear Lubos, although I respect your comptence in the field of physics I, as a German, have to tell you that you understand very little about German politics. According to the latest polls not more than 9 percent of Germans would be voting for the AFD. This is extremely little...


OK, who was right, Skepsis? 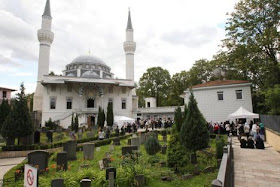 A pretty mosque in Berlin

At any rate, an organization of AfD in Lower Bavaria recommended to close mosques in Germany. Lower Bavaria is a region of Bavaria adjacent to Czechia – most of the Czechoslovak-West-German border is actually a border of Bohemia and Lower Bavaria.


Mr Petr Bystroň, the Czech-born leader of the wholly Bavarian branch of AfD, said that he didn't immediately endorse the Lower Bavarian 45-page study "The Courage to Take Responsibility" and asserted that the authors are similar to some "more right-wing AfD members he is familiar with".


The study argues that the mosques have ceased to be pure places for spiritual and religious enrichment – and partly became places working to undermine the whole German system. And that's why the freedom of religion shouldn't be blindly applied to the mosques – they are simply not about pure religion. Their purpose is something else, too.

I totally agree with that. The freedom of religion shouldn't be overinterpreted to the extent that any criminal or otherwise undesirable activity could hide behind it.

The Punching Bag Post wrote some shocking numbers concerning the influence of the mosques, especially in Belgium. Alice Greene says that a staggering 80 percent of Muslims in Europe are on welfare. What are they doing? Some estimates say that up to 500,000 Belgian Muslims – just Muslims from one smaller European country – have traveled to Iraq and Syria in order to fight on the side of Daesh. If they were a substantial percentage of the Daesh warriors, these Belgian residents have committed tens of thousands if not over one hundred thousand murders in recent years (the highest estimates have claimed that ISIS has killed 170,000). Isn't it enough at least to notice that there is a problem right inside Belgium? Only 20,000 people are murdered in all of Europe every year.

If the truth is even remotely close to that, it's just shocking. It means that the support for the unacceptable terrorist organization is a mainstream movement within the Muslim community. It's clear that the support for ISIS must be vastly higher than the number of people who have actually traveled to Iraq and Syria – because the extra hassle you have to undergo if you want to travel to Iraq and Syria is significant and must surely reduce the numbers considerably. Also, I find it almost certain that the mosques must play a substantial role in promoting these ideas – such as the idea that you should become an ISIS warrior.

An alternative to the ban on mosques could be a policy allowing some law enforcement officials to terminate a prayer as soon as it degenerates into an unconstitutional political planning process or arrest visitors of the mosque who do such things "locally". At any rate, given the sheer size of the problem and the low likelihood that it will go away (even if Daesh is removed from Iraq and Syria, the more general "quest for the Islamic world domination" will surely survive as a powerful idea), some "fixes" will have to be thought about. If no "fixes" are applied soon, it's almost guaranteed that at some moment, the Muslim community will be causing a sufficient amount of problems that the support of the original population for some kind of defense will exceed 50% whether someone likes it or not.

So it's a good idea to think about the "right ways to act" already now and hope that it's not yet too late.
Luboš Motl v 11:23 AM
Share