Particle physicists prefer to believe that there exists dark matter and it's mostly composed of a new elementary particle species such as the WIMP (Weakly Interacting Massive Particle such as the LSP, the Lightest Supersymmetric Partner in supersymmetric theories, such as the neutralino, such as the bino or wino and so on) or the axion. 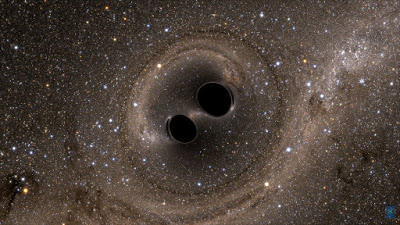 But such a dark matter particle hasn't been found and it's not crazy to assume that it doesn't exist. Some people want to modify Newton's or Einstein's equations (MOND etc.). But it's also possible that dark matter exists but it is not composed of elementary particles. It can be MACHO, RAMBO, SUPERMAN, PUTIN, or something else.

In fact, the two black holes that were detected by LIGO may be representatives of dark matter, as Simeon Bird and 7 co-authors (including AR, a Nobel prize winner) argue in the new preprint:


It's pretty much indisputable that what LIGO has seen was a merger of black holes. But what was their pedigree?


People mostly assume that these black holes of masses 29 and 36 Suns have originated from some very massive stars that collapsed. But such black holes are rather heavy which allows Birds to propose an alternative scenario. They could have been primordial black holes, PBH, Peace Be upon Him.


If those black holes were primordial, they didn't originate from a collapse of stellar matter. Instead, primordial black holes have been around from the early stages of the life of our Universe. In those childhood days, the density was high and sufficient to create black holes anywhere.

The observed masses around 30 Suns look perfect for their purposes; significantly lighter as well as significantly heavier PBHs are pretty much excluded as dark matter. But their framework predicts something about the distribution of the masses of similar black holes, ellipticities, and other things.

We have known that gravitational waves exist for quite some time – and LIGO didn't bring us anything "really new" in that sense. It is an extraordinary result of applied physics and engineering. The existence of gravitational waves is a closed chapter of the history of science. The existence of black hole mergers has been experimentally proved for the first time – but no sensible physicist has doubted it, anyway.

However, LIGO doesn't just close all these questions. Instead, LIGO's discovery is the beginning of something – a new era of our observations of the Universe. These gravitational detectors allow us to "hear" the Universe. For those reasons, we have acquired a new way to study astrophysical objects that became audible but are often invisible.

If the proposal by Bird et al. is right (or at least if it is defensible), LIGO's first discovery may directly change some of our views about questions that are shockingly close to fundamental physics – namely opinions about the character of dark matter. I don't know whether Bird et al. is right. But it is a sufficient "proof of concept" that observations of the Universe by completely new "senses" may allow us to think about the Universe is dramatically new ways, too. And one billion dollars is really a tiny price for such an outcome.
Luboš Motl v 7:04 PM
Share