Dozens of newspapers including The Daily Mail, The Sunday Times, The Independent, International Business Times, PinkNews, and The Australian claim that the LHC is the Large Homophobic Collider. Why? 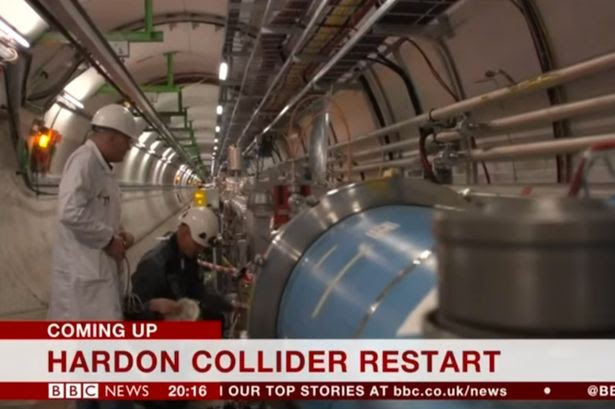 To make the story short, the reason is that at least one employer of CERN – Aidan Randle-Conde (whose name has appeared on TRF many times, e.g. here where I couldn't agree about his tirade against combos) – has been whining that not every other employee of CERN has been taking his posters promoting assorted sodomy festivals seriously. Someone wrote "Schwein" (or a logo of a pig) and even a quote from the Bible on his posters. It's an unacceptable campaign of hate and intolerance, Aidan whines.

To make things worse, this is not just a personal campaign by one particular activist with the standard anomalous sexual tastes. Now former Director General Heuer has threatened his employees that he would chivvy and penetrate them (in Czech, we use just one word "buzerovat") if they did anything that the LGBT activists disliked.


You know, there is a question whether any solidly non-scientific posters (posters promoting any parties, for example) should be allowed at places that belong to the whole CERN, a research organization. But if organizers of LGBT parties such as Aidan are allowed to add posters, it's obvious that those who think or realize that LGBT is a deviation – and the Christians in particular – must be allowed to do the same. It's imaginable that people agree that Aidan has the right to place LGBT posters on the CERN notice boards. But he clearly can't have a monopoly over these notice boards.

Organizing LGBT parties and inviting the CERN community to them is a highly controversial thing. If you're not capable of dealing with the controversy, with the fact that billions of people on Earth and thousands of CERN employees consider you a pig – and most of the latter just politely stay silent as long as you avoid active provocations – then you simply shouldn't do such things. You shouldn't provoke because by the third Newton's law, actions produce reactions.

Surely quotes from the Bible, a book defining our civilization, haven't become less kosher than festivals of sodomy, have they? Sometimes, I am not sure about the answer anymore. A black Christian graduate student who wrote the same verse from Leviticus ("If a man lies with a male as with a woman… they shall surely be put to death") on his private Facebook page was recently expelled from Sheffield University. I agree with 90+ percent of the British commenters over there who think that this terror against the Christian is unacceptable. Some of them point out that even the fact that the university was apparently checking his personal Facebook page is absolutely sick.

An LGBT CERN poster. Sorry but the QCD colors are \(SU(3)\) quantum numbers that have nothing to do with the colors of the visible spectrum let alone colors on the "rainbow flag".

I urge the new director and all other CERN employees to guarantee the same rights and freedoms for those who agree with the traditional medical or Biblical view on LGBT conditions, as to those who disagree with them. CERN has absolutely no business to become a major organization promoting sodomy and prosecuting those who don't like sodomy. LGBT CERN is already the #1 officially recognized "informal network" which could be OK as long as this status isn't used to strip the other CERN employees from their basic rights.

One more thing. I would be rather unlikely to actively do something with these posters. People from the PC indoctrinated societies of the West are virtually incapable of doing anything with them. When it comes to the editing of LGBT posters, these nations have become castrated. It's most likely some people with weaker connections with the postmodern PC West who have defaced the posters. They may come from countries like mine – or much less Western countries – where it's still the default attitude not to worship the LGBT movement.

Just to be sure, according to numerous surveys, Czechia is the #1 tolerant country in the world when it comes to these issues (Wiki) – really a country where no one gives a f*ck – but that's something else than saying that most of the tolerant people think that the two candidate lifestyles are equally good, or that those who say "No" have a problem. They don't. And they mustn't have. So using his power over the venues, the Prague Archbishop Duka was still able to ban smaller events at the 2015 Prague Pride that would seemingly officially involve some Catholics, and so on. Even though we're a nation of atheists, no one would dare to question his right to suppress those things.

For this reason, the bureaucratic harassment against the people who find the LGBT posters over the edge is a manifestation of racism of a sort, too. Members of those nations have the right to disagree with the LGBT lifestyle or disrespect the LGBT parties – and according to the defining principles of the Western civilization, Westerners must have this freedom as well although many people have forgotten what the West actually means.

But even if the West abandoned the principles of freedom that have made so much for this civilization of ours, one should still realize that CERN is an international organization that has member countries (see the map above) where it has become fashionable to worship the LGBT lifestyle, as well as member countries where it hasn't become fashionable. It's expected from the CERN officials – people dealing with a highly international community – that they will turn CERN into a home for the employees from nations in both groups.
Luboš Motl v 3:32 PM
Share