Will Hyperloop merge Slovak and Austrian capitals by 2020?

Cosmology: BICEP3 began to collect data yesterday. Papers may be out at the end of 2016. BICEP3 has 5 times as many sensors and pixels as BICEP2, resolution 0.5° instead of 0.35° of BICEP2, and frequency 95 Hz instead of 150 Hz of BICEP2. They should be able to see weaker tensor perturbations.


In recent days, most of the important Slovak, Czech, and English newspapers – e.g. the Daily Mail – have informed us about Slovakia's becoming the most enthusiastic pioneer of certain technologies, namely Hyperloop.

Bratislava is a fun city, somewhat similar to Pilsen.

Hyperloop is an open-source concept for fast transportation based on the late 18th century "atmospheric railways" and, using some modern buzzwords and backing by billions of dollars, resuscitated by Elon Musk. Capsules in an evacuated tube are driven by pressure differences (e.g. air compressors) as well as electromagnetic fields (induction) – I don't actually understand why he needs both and which of them is more important – and the maximum speeds reach 1,200 kilometers per hour.


The Slovak prime minister Robert Fico – a social democrat who has been vigorously attacked by the Western politically correct media (and appreciated by the European patriots) for his decision not to allow a single Islamic immigrant to enter Slovakia under his watch – was the first important leader who has signed a contract with the Hyperloop Transportation Technologies.


By 2020, the Hyperloop connection between Vienna, the Austrian capital, and Bratislava, the Slovak capital, should be complete. An extension to Budapest could be built at the same time and available momentarily. 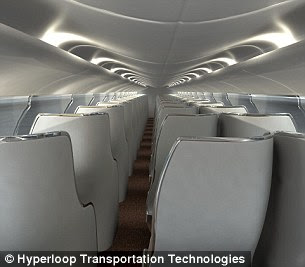 The interior of Hyperloop is supposed to look comfortably.

As you must know, Hyperloop is supposed to connect San Francisco and Los Angeles, i.e. Northern and Southern California, with a 30-minute wild ride. California is the hotbed of many state-of-the-art technologies so one shouldn't be shocked. But with all my respect to our Slovak brothers and their claims that they're the most technologically forward-looking nation in the Milky Way or whatever they exactly said, the inclusion of Central Europe would make this technology sort of "omnipresent". I am almost jealous about our Slovak brothers. 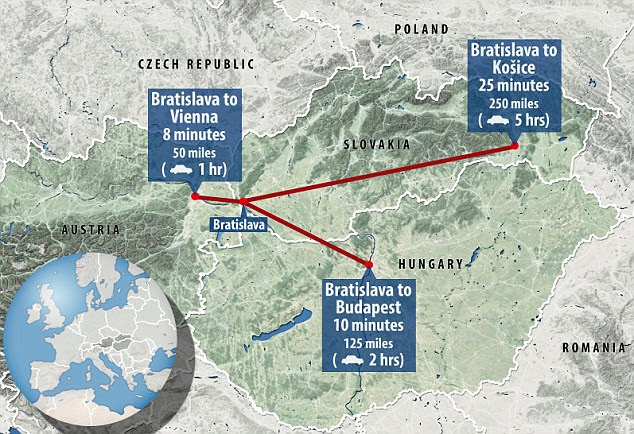 You should understand that Bratislava, the Slovak capital, lies on the border of Slovakia (a very non-Czech geometry) and Slovakia has border both with Hungary and with Austria (both are very close to Bratislava). Because Slovakia and Austria are neighbors with a nonzero border, Czechia and Hungary aren't and can't be neighbors, a geographic detail that is confusing even for most of the Central Europeans.

I am not sure whether I would want to be a "test passenger", i.e. anyone who uses this method of transportation in the first year or so. 1,200 kilometers per hour (or 333 meters per second) is quite a high speed. But such a connection could change the perception of the geography.

It's about 50 miles between Bratislava and Vienna. (Brati-slava translates as Brothers-Fame or Brothers-Celebrate. But if you imagine that it's some Eastern European city without any sophistication, perfectionism, or German-language influence and very different from Vienna etc., you should better use the old German/English name "Pressburg" for Bratislava.) It's just a bit closer than the Pilsen-Prague distance, among others, and it takes 1 hour by car.

With Hyperloop, you could be in the other city in 8 minutes. It's much faster than the time I need to go to the other side of Pilsen with the public transportation. Going from 0 to 1,200 kph (333 meters per second) in 4 minutes (240 seconds) correspond to the acceleration 1.4 meters per squared second, or 0.14 g. Not extreme if you divide it in this way.

If it became really easy to get from Bratislava to Vienna (or Budapest) and back, you would in some sense feel that "you live in a twin city". That could change many things in business, politics, and everyday life.

Even Bratislava-Budapest (Budapest is the capital of what European country?) which is 125 miles and 2 hours by a car would be about 10 minutes. And Bratislava-Košice, the connection between Slovakia's two largest cities (on the Western and Eastern end of Slovakia), which is 250 miles and 5 hours by car, would be 25 minutes, faster than the sides of Pilsen by the public transportation. People would really live in "one city" in some sense.

If I could go to Prague (or even Munich?) in 8 minutes cheaply enough, I am sure that I would be there much more frequently. People in these effectively connected cities would be mixed much more thoroughly. I am pretty curious whether the Slovak Hyperloop will actually become a reality.


By the way, Slovaks are Europe's #1 car producers per capita (over a million cars a year per 5 million inhabitants!). The pride is somewhat limited, however, because none of the major brands they produce are their own. Czechia, #2, is better in this respect – Škoda is the largest car producer (also more than 1 million cars a year), making about 20% of the Czech economy. The VW-owned brand has returned to growth in recent months, four months after the stupid DieselGate. The year 2015 meant another record profit year for Škoda Auto, despite the group's scandal. Pilsner Urquell had a record year, too, and it has sold over one billion liters of beer.

Škoda recently introduced its Škoda Kodiaq, a larger SUV brother of Škoda Yeti, as "Škoda VisionS". The model (I would recommend them the name Škoda 1204, a funnier name, for the Czech market – search for Škoda 1203) should be sold at the end of this year. I feel Yeti has a stronger personality. But the interior of the Kodiaq, with the omnipresent touch displays and 85 iPhones distributed across the car, is pretty cool. No classical buttons. Škoda's Slovak chief designer Jozef Kabáň was probably inspired by Tesla's interiors. And there's some room for the Czech crystal glass (not "broken glass" LOL). The company's Driven by Design ads look almost like arts.
Luboš Motl v 12:51 PM
Share