Anti-quantum zealots have deduced exactly the opposite conclusion again

I am overbohmized – the Bohmians recently exploded like the mosquitoes on a warm and wet summer evening – but this is a story I can't omit. The Quanta Magazine published an article by Dan Falk


New Support for Alternative Quantum View
An experiment claims to have invalidated a decades-old criticism against pilot-wave theory, an alternative formulation of quantum mechanics that avoids the most baffling features of the subatomic universe.


The title and the subtitle are just 100% lies. They should have said:


Another nail in the coffin of an anti-quantum hypothesis
An experiment has verified a decades-old criticism against pilot wave theory, a superfluous ideological superstructure meant to deny the most important insights of the quantum revolution.


Can you spot the difference? I find it amazing how these people don't just "subtly modify" and "distort" the message. They just lie into your eyes. They're eager to turn things by 180 degrees and tell you the exact opposite of the results. These individuals lack the basic morality.


Those who disliked quantum mechanics liked to say that it was "not possible to decide" whether one really needed to switch from the classical framework to the qualitatively new one based on the observers and complex probability amplitudes. It was always nonsense because these two frameworks are so obviously different. But OK, John Bell segregated these two frameworks "rigorously" when he derived that any local realist theory predicts correlations in a certain particular experiment (there are obviously infinitely many other experiments where one could show the same) that are smaller than the correlations predicted by quantum mechanics.

In this way, John Bell made a rigorous proof that the question whether "the new quantum mechanics is needed or the old realist pictures are enough" may be settled by an experiment. The experiment was done. Quantum mechanics was perfectly confirmed while the local realist predict was safely refuted. You would expect that this would mean that people stop talking about nonsensical hopeless alternatives given the fact that the superiority and precision of quantum mechanics and hopelessness of the alternatives was demonstrated so explicitly.

No. The experimental verification of quantum mechanics and liquidation of the alternatives was used by the anti-quantum zealots to energize them. Their reaction to the experimental result was exactly the opposite than a reaction expected from a scientist – someone who abandons a theory that is refuted and focuses on a theory that is confirmed. In fact, the amount of crackpot papers trying to find realist replacements for quantum mechanics went dramatically up, not down, after the description and realization of Bell's experiment. 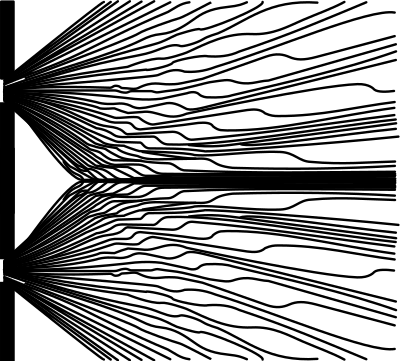 Bohmian trajectories never cross the \(z=0\) plane – the horizontal line in the middle of the picture, in this convention. A particle in the upper half stays in the upper half, and the same holds for the lower half. There's clearly no sense in which this correlation exists in quantum mechanics – or the real world – and this unphysical feature of Bohmian mechanics is also exploited by ESSW to show that the Bohmian paths are "surreal".

The new experiment referred to by the Quanta Magazine was done by Dylan Myhler and 6 co-authors (Ontario+Australia):


The main conclusion is written as:

We have verified the effect pointed out by ESSW that for a WWM with a delayed readout, Bohmian trajectories originating at the lower slit may be accompanied by WWM results associated with either the upper or the lower slit. However, this surreal behavior is merely the flip side of the nonlocality we also demonstrated. [...]


So an experiment by ESSW was done and the predictions were confirmed. What is ESSW? It refers to the 1992 paper


by B-G. Englert, M. Scully, G. Süssman, and H. Walther. The ESSW paper has 120 citations now – not much, Bohmians don't like pointed criticisms, but it's still more than almost all critical papers about Bohmism. They explain Bohmian mechanics quite clearly.

The reconstructed Bohmian trajectories were generally predicted to disagree with the trajectories measured using the "which way" detectors. I think that the basic point is that the retrodiction involves the pilot wave – which is mathematically the wave function. In quantum mechanics, the wave function collapses at the moment of the measurement.

Except that in quantum mechanics, this is not a real process. In particular, as long as the wave function for a particle collapses before the measurement, it doesn't matter when it collapses. Things are very different in Bohmian mechanics because the wave function rebranded as the pilot wave drives the "actual" particle – affects the Bohmian trajectory. So it matters when the collapse takes place. The wave function is misinterpreted as a classical field and it has unavoidable observable consequences.

Inconsistencies of this sort are obviously unavoidable if you try to claim that "new things exist" that are shown or assumed to be physically meaningless in quantum mechanics. Quantum mechanics requires the question about the "position before the position is measured" to have no specific answer. It also makes the precise shape of the wave function before the measurement irrelevant as long as the correct wave function is used to predict the probabilities of observations. Everything that is "out there" before the measurement is unphysical – and every theory that tries to claim that such things before the measurement (pilot waves or trajectories or both) "objectively exist" unavoidably runs to similar paradoxes.

Fine, Mahler and 6 co-authors of the Science Magazine article have performed the experiment and the expectations by ESSW were confirmed. The result is as clear as it was in the case of Bell's inequalities. The experiments unequivocally support quantum mechanics and disagree with the "alternatives". In particular, it's shown that the "Bohmian trajectory" has nothing whatever to do with the reality. So how can anyone ever say that this experiment brings "new support" for Bohmian theory (there has never been any old support, let alone new support)?

It's probably meant to be justified by the sentence (and related comments):


However, this surreal behavior is merely the flip side of the nonlocality we also demonstrated.


What? ;-) The ESSW paper and the serious observations in it don't depend on any "nonlocality" whatsoever. The word doesn't appear in the ESSW paper at all (the highly problematic term "weak measurement" doesn't appear there, either). Two trajectories either agree or disagree. And yes, they disagree. That's the problem ESSW found and Mahler et al. confirmed. What does it have to do with nonlocality?

Even more seriously, the nonlocality is needed in Bohmian mechanics to have a chance to reproduce at least something (at the end, it's never enough to explain everything). But it is not needed in quantum mechanics. And this Bohmian need for a nonlocality is another serious defect of Bohmian mechanics. These defects – nonlocality and the surrealism of the trajectories – don't cancel or subtract. They obviously add. Maybe these two problems partially overlap so as a combination, they are 1.5 problems or so. But surely nothing close to zero.

The would-be logical and verbal tricks by which this experiment is translated to the semi-popular article about "a new support for Bohmian mechanics" makes absolutely no sense.

Finally, I think it's right to show what's happening behind the scenes. I picked a physicist related to these topics who clearly agrees that Bohmism is pseudoscience and asked him or her for a guest blog. The answer?

I have no intention of giving this stuff additional publicity. I wrote the ESSW paper 25 years ago and that is all I'll ever contribute to this discussion. It says all there is to say. I am not on a crusade against Bohmians; rather, I feel sorry for them.


Great, one may feel sorry for them. They're disturbed. But they are likely to survive because they have flooded most of the popular journals, a big part of the popular books on the subject, and are not conquering Jim Simons' above-the-average-pop-science webzine about science. They're spreading like mosquitoes and they may cripple the education of modern physics at most universities at some point in the future, too.

They don't need you for the publicity. Folks like Dan Falk are more than enough. They make you irrelevant, dear candidate guest blogger who has refused the offer. Even though Mahler et al. have experimentally confirmed your prediction for the experiment your group designed in 1992, you are presented as losers. And from the viewpoint of sociology, you are losers. You wouldn't be able to write an article that would ignite similar responses in the mass media today.

Much of this strengthening of this dishonest pseudoscientific (Bohmian) movement may be blamed on those who are just "sorry" for them for 25 years. Sorry but if you don't move your buttocks and prefer to feel "sorry" about these highly aggressive people, you are helping to put the future of physics at risk. You may not care because you're old enough but younger people who should do physics may find themselves to be under pressure from this stuff. A crusade against these dishonest things is a must.
Luboš Motl v 8:26 AM
Share