On May 14th, 1316, Charles IV, the Czech king and the Holy Roman Emperor, was born. A decade ago, the Czech public chose him as the "Greatest Czech" in a poll, after the universal genius Jára da Cimrman was eliminated because of some anti-quantum zealous complaints concerning his "reality". ;-)

Charles IV was extremely educated, did a lot of uncontroversially great things for this golden era of the Czech kingdom, and equally importantly, he did quite something to grow the fame and imperial influence of our kingdom, too. Just to be sure, we're not one of those nations that consider imperialism to be an insult.


Charles IV isn't really celebrated outside Czechia even though he was a classic Cosmopolitan figure. He would probably disagree that we call him the "Greatest Czech". Maybe he would prefer to be called a European. He surely exceeded the importance of the regular Czechs of his time – and most other times.


Charles came from the House of Luxembourg. When he was alive, Luxembourg belonged to the Visegrád Group. The group was first estabished in 1335 and Charles attended as a young political big shot, sure to become very important soon, along with his father. And the expectations about the 19-year-old guy turned out to be spot on.

(These days, Luxembourg is no longer a member of the Visegrád Group. In fact, Jean Asselborn, the foreign minister of Luxembourg, just told the German media that whenever he hears about the views of the Visegrád Group countries, his psychiatric disease explodes and he starts to jump over the room like a piece of beheaded poultry. I hope that the translation from German was accurate.)

Charles IV received a luxurious French education (he became a pet of the French king and was donated some French aristocratic babes etc.) and he spoke 5 languages: Latin, Czech, German, French, and Italian. His years in France were important for his character – and the centralized system of governing was one of the things he has learned in France. He was the first Bohemian king who became the Holy Roman Emperor (well, he was the Roman-German king since 1346 and Roman emperor since 1355). He has also been the king of Italy/Lombardia, Burgundy, and the Moravian margrave, of course. In 1348, he founded the third oldest university in Europe, my Alma Mater, Charles University. You may have heard of the Charles Bridge, too. (Many eggs were used for the construction.) He had a special attachment to my region of Western Bohemia. So it isn't quite a coincidence that the Karlštejn Castle is West from Prague and additional castles, Radyně a few miles from Pilsen and Kašperk in the Bohemian Forest, belong to the Western Bohemian regions, too.

There were things outside Bohemia he founded such as Montecarlo, unfortunately one in central Italy, away from Monaco. ;-) Add Lauf in Bavaria...

But he also built the New Town of Prague, now one of the classic central neighborhoods in Prague downtown. Even 650 years later, it's still the newest among the five towns combining to the historical center of the Czech capital and we have no reason to change anything about the "new town" terminology.

In Prague, one shouldn't forget The Church of Our Lady [Mary] of the Snows and the foundation stone of the St Vitus Cathedral, the dominant object inside the Prague Castle whose construction was only completed in the late 1920s.

Charles IV also hired people to create the newest Bohemian crown – the main Czech crown jewel – for his coronation. He has done very many things like that. 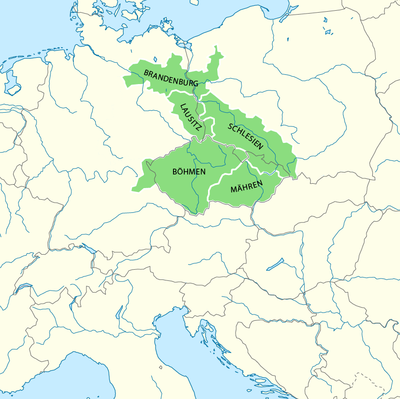 His political influence was far-reaching but one must distinguish his leisure-time hobbies, like his being the Holy Roman Emperor, from the actual territories that belonged to the Kingdom of Bohemia. As the map above shows, Charles IV incorporated a nontrivial portion of East Germany. So he was explicitly expanding in the Northern direction.

If you watch the animated historical maps, this must be contrasted with the previous, 13th century when the Czech kingdom was expanded in the Southern direction and included much of Austria, Italy, and Yugoslavia – and touched the Adriatic Sea. Between 1301 and 1305, Prague controlled most of Eastern Europe. But the map vastly overestimates the influence of Wenceslaus II who was the king at that time – he was accidentally elected the Polish and Hungarian king.

Two weeks ago, there was a radio debate between Charles IV and Louis IV the Bavarian about the Pope, power struggles, and marriages in their families. I found it pretty funny.
Luboš Motl v 8:27 AM
Share