Obama blackmails all schools: you will lose funding if you don't allow perverts in restrooms of their choice

These news sound just like the stories in The Onion but they seem real. 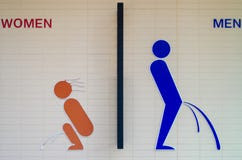 North Carolina's lawmakers saw some confusion about the meaning of the words "men" and "women" (and the corresponding logos) written on restrooms. So they have adopted a special law saying that "men" are those who have a little limb in between the two legs while "women" have a slit over there.

This knowledge may be trivial for most kids in the kindergarten but it seems that the perverts in assorted city halls (which decided to boycott North Carolina!) and the folks in the White House haven't mastered these insights yet.

Wow. This is an example of the utter insanity that a country may face if it doesn't regulate left-wing extremists before it's too late.


So far, the U.S. Supreme Court has used the words "sex" and "gender" as synonyms. In fact, the word "gender" was only introduced to their legal discussions because male judges were getting distracted every time they heard "sex" (they get distracted every 50 seconds, anyway). Also, "gender" may be a grammatical realization of "sex". It's not so important in English (countries and ships are referred to as "she" while most other inanimate nouns are "it") but I assure you that in Czech, about 1/3 of nouns are masculine, 1/3 of nouns are feminime, and 1/3 of nouns are neuter – and you simply couldn't speak Czech if you didn't know the genders of the nouns you want to use.

Except for people who suffer from serious genetic disorders, every person has either XY or XX, and is therefore male or female. One may change the appearance by a surgery (or hormone injections) and become mostly if not completely indistinguishable from the other sex relatively to the sex he or she got from Mother Nature. But it is – and has to be – a hard and risky enterprise. One can't change his or her sex simply by signing a form "I feel like that". One's sex is a fundamental part of the person's identity, not a "Coke or Pepsi tonight" selection.


OK, now the idea of the left-wing extremists is not only that the sex (encoded in biological facts) and gender (what the person wants to be) are different. But the latter should be more important and primary in deciding what restrooms, locker rooms, changing rooms etc. one should use! Just imagine how crazy it is. Why don't they ban the "segregation" of the restrooms and changing rooms etc. altogether?

Someone may want to be a person of the opposite sex. OK, we may discuss whether it is a mental disease, a physical disease, deep prank, deviation, perversion, anomaly, or a personal choice one should be allowed to have. I tend to think that a child or a teenager who reveals these tendencies should be discouraged from pursuing them because he or she may very well damage his or her life because of some idiosyncrasies (I believe so even though I do understand that the discouragement won't work in many cases). But even if one has the greatest respect towards this game of people pretending to have the opposite sex, this respect still cannot change the reality.

The person may be seen by others to be physically male – or female – and that's what's actually relevant for the "segregation" of the restrooms, locker rooms, and changing rooms.

Well-behaved, shy enough men and boys don't want to go to restroom while surrounded by women or girls (and vice versa) because they could get distracted. Sometimes, they couldn't even force themselves to pee, and so on. If someone visually and obviously belongs to the opposite sex, it just doesn't matter a single bit what he or she wants to be or what he or she thinks about himself or herself. In the restrooms, people don't see what other people think and why. But they do see what they have in between the legs (and perhaps elsewhere).

So I – and everyone else – may have a respect towards someone's decision to pretend to be a person of the opposite sex although I don't think that such a choice may be both healthy and intelligent. But I can't allow such a person to change my perception of reality. If I see the evidence, I still know that the person's sex is whatever the biological criteria imply. My (and other people's) freedom to think and my (and other people's) affinity towards the truth are surely more important than someone's idiosyncratic transgender fantasies.

Now, the obvious problem with the "gender according to one's choice" is that people – and teenagers or children – may be so attracted to the idea of visiting the opposite sex's restrooms and changing rooms etc. that they declare themselves "transgender" for that reason. According to Obama's letter, a confirmation by the parents may be needed for youth. This is supposed to be enough to guarantee that teenagers and kids won't abuse it.

Oh, really? Is the idea that no teenagers are interested in these unusual visits? People pay trillions of dollars every year to achieve things related to sex. Surely if they need to fake a transgender disorder, fool their parents, fake their parents' signature, or create fake parents as wholes, many of them will do it.

A year ago, we discussed the bizarre story of Rachel Doležel, the fake African American woman. The logic is exactly the same for transgender people and members of other groups that became holy cows according to the left-wing extremist groups. It simply seems highly beneficial from many (even though not all) viewpoints to be counted as a member of one of these groups.

But even if the policy weren't abused in this way, it would still be a bad policy because these transgender people in the opposite-sex restrooms will cause pretty much the same discomfort to the users of the restrooms as all people of the opposite biological sex do.

It's amazing how the left-wing radicals are obsessed with the desire to rewrite the history and the present, make all the things look very different than they are. For example, a great majority of the civilization advances was created – and is still being created – by men (although women have been essential for their emotional life, as a beloved inspiration, for survival of the species, in the kitchen, bedroom, and other rooms; and this oversimplified attribution only describes the "broad picture", not every individual case). The left-wing radicals do all sorts of amazing nonsense and employ lots of intimidation to obfuscate this simple fact or make people forget about this "detail" or perhaps change the future – or at least the "legally allowed perception of the future".

But however dishonest you are, left-wingers, you just can't change the reality. You may force many people to play the embarrassing game with a man boasting a dick who pretends that he is a woman. But this kind of mass hypocrisy will always have its limits. A man in a women's bathroom will always create some problems. A bold and frank kid will always scream that the emperor has no clothes and he has a vagina in between his legs, so he's probably not the emperor but a deceitful empress, and so on. Do you want to silence this kid? Or kill him? He's my hero and he's the hero of everyone who still considers the truth and honesty to be their value. This honesty is a big part of the reason why we normally say that kids are pure souls. Last but not least: left-wingers often try to pretend that they're the superior part of the political spectrum. But they can't change the fact that they're the stinky, immoral cesspool.

Just like transgender people "want" to be people of the opposite sex, feminist Cora trigglypuff Segal (thanks, Klaus Fuchs) "feels" that she is actually an irresistible babe. Does this "self-identification" of this lady mean that all men must treat her as an irresistible babe and have sex with her all the time? Is it discrimination if men refuse to sleep with this "self-identified" beautiful babe (e.g. because they don't want to be rolled over and choked to death)? I sincerely hope not. Most things that are supposed to work must be filtered and adjusted and managed according to the reality as it is, not according to what some people would want the reality to be. If you want to survive, you should better not find yourself under trigglypuff's body even if she considers herself a Barbie.

When Obama sent the outrageous letter, many officials in Texas have reacted just like I would. They pointed out that this plan means to strip the poorest people of their access to education because the federal funding is especially important for the poor – and these poor people are also the most likely ones who will consider this new policy unacceptable and who will prefer to give up these 30 pieces of silver that the tyrannical government is paying in order to turn them and their children into perverts.

Texas Lieutenant Governor Dan Patrick will fight and he said:


“[The Obama administration rule] will be the end of public education if this prevails. People will pull their kids out. Home schooling will explode. Private schools will increase. School choice will pass.”


At least Texas, Arkansas, and North Carolina will resist the order in one way or another. What will the other eight states do?

This whole ideology – and now policymaking – has so many brutal dimensions. One of them is overreach: whatever the right answer is, such local questions shouldn't be decided centrally by the federal authorities. Another one is the word "discrimination". What's discriminatory about the fact that restrooms are separated? Every person is born with exactly one sex, so he or she is allowed to go to 1/2 of the restrooms in the world. What is discriminatory about it? Many people would love to attend the opposite restroom but this desire doesn't prove any discrimination by the rest of the world. It shows their inner deviation. Even if you use some euphemisms for the deviation, it's still true that the desire of the individual isn't the society's or school's fault.

It would be a discrimination if these people could choose which restrooms they want to use – while the non-transgender people wouldn't have this freedom. But at the end, the logic governing separated restrooms isn't about any interpretation of any "discrimination". It is about the pragmatism and maximized comfort of most of the people who have to use the facilities. And let me remind you that even kings and queens sometimes have to go to toilets.
Luboš Motl v 10:23 PM
Share