...and maybe something worse: a very evil intent...

If there were a referendum about the departure of Czechia from the EU, some polls indicate that as little as 25% of the population could be voting "Stay". Well, that was yesterday. An hour ago, the percentage could be lower than 25% because lots of Czechs who hold weapons – and their relatives – were terrified by the news about the EU proposals to ban lots of guns:


A stringent EU regulation may help terrorists, the (ministry of) interior warns


In the poll next to the article, 52% of respondents say that the hold a gun with a license, 48% don't. This number almost certainly isn't representative – the holders are more likely to press any button. But the number of Czechs who could be affected is huge. In Czechia, sport shooting is the 3rd most widespread sport after soccer and ice-hockey but the number of guns for self-defense trumps those for sport and hunting, anyway. 775,000 of 10 million citizens have licenses allowing them to buy and possess guns right now. There are about 500 "forbidden armament" cases in a year and 2,000 related minor offenses. See Gun politics in Czechia. 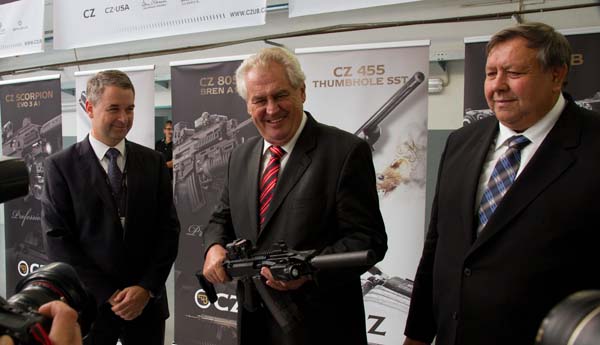 President Zeman with a toy

At any rate, the European Commission – the bunch of individuals who would be a government if the EU were a country – has written a proposal to ban several huge classes of so far legally held weapons in the EU. Well, there are three proposals, an extremely draconian one and some tough ones. The justification is that such a ban will make terror attacks such as the Friday 13th attack in Paris less likely.


Not only the affected part of the Czech public is angry. Our security and intelligence elite seems to react uniformly: they just can't believe their eyes. The point is that a huge fraction of the "weapons to be banned" would get lost and the control over them would completely evaporate.


Ms Milena Bačkovská, an official in the Prevention of Crime department of the Czech Ministry of Interior, says that the transfer of such weapons to the illegal sector would mean that the black market would suddenly be supplied directly from within the EU. She pointed out that the Paris terrorists have used illegal arms that were either smuggled to the EU or that were created by repairing dysfunctional guns bought in the EU.

To make things worse, these new illegal weapons would be guns in a very good condition – not tired Kalashnikovs from the Balkans or functionally problematic reactivated guns adjusted from originally eliminated or expansion weapons. The ministry estimates that between 20% and 50% of the Czech holders of "soon to be banned" weapons would react by reporting their so far legally held weapons as "lost", despite the sanctions that the "lost" status may mean for the owners.

Last month, both chambers of the Czech Parliament approved statements denouncing the EU proposals. The protests are symbolic, however, because a majority will be deciding in Brussels and Czechia may be easily defeated in the vote.

The most draconian proposal wants to ban all self-loading guns, including ordinary pistols. I think that it could even affect the most widespread gun in Czechia, the pistol ČZ 75; over a million of those have been made since the 1970s (one of the most successful pistols in the world). By the way, the originally French name for "pistols" is likely to have come from Czech "píšťala", a flute: in the 15th century, the Hussites were already using "píšťala" [peesh-tyallah] for a hand cannon. Aside from the pistol, the Czech language gave the world the robot, howitzer/haupnitz (from houfnice), polka (including the dance), and, indeed... the dollar (from our medieval currency, tolar). Quite a gift! ;-)

A less strict proposal of the European Commission wanted to ban "self-loading weapons of military appearance" or "weapons adapted from original fully automated guns". Our experts have evaluated that it would affect about 50,000 currently legally held weapons. "The estimate isn't precise because the description of the banned weapons was highly ambiguous," Bačkovská said.

Top security experts are flabbergasted. Mr Andor Šándor, a well-known general and ex-boss of the military intelligence, says that people won't simply sacrifice their weapons, especially in this era when the security situation is deteriorating. Šándor added:


It is another idiotic proposal by the Commission. When they were measuring the length and curvature radius of the bananas, we could have smiled. But if someone wants to impose a draconian ban on the legal ownership of weapons, apparently hoping that this move will prevent terrorists from committing terrorist attacks or it will reduce the range of the organized crime, then we may see these people don't understand the issue at all.


Mr Karel Randák, an ex-boss of the civil intelligence, agrees that the justification of the ban is misguided:


I can't imagine a terrorist who would want to commit a terrorist attack with a legally owned weapon. And when he needs an illegal one, he will certainly find a way to get one. The proposal is myopic and no one is responsible for solving the consequences of such a universal ban. If they collected all the weapons, what would be done with them? Most likely, they would be accumulated in a warehouse. How can it be guaranteed that the weapons won't start to disappear from this warehouse as well?


The readers' reactions are often much more brutal, as you can imagine. If the draconian proposal is approved, some commenters impress others with contingency plans to create a flame-thrower – which is not banned and in fact, it's not even a weapon. Many readers want to leave the EU governed by dilettantes and imbeciles.

Some pundits point out another possibility. The regulations are not being proposed because the authors are naive emasculated idiots, as most people seem to suggest, but because they know what they are doing. The goal may be to demilitarize the whole European population so that the Muslim warriors may arrive and freely cut the European throats just with a couple of knives.

A few months ago, I discussed the gun controls and Steven Weinberg's attitude to the guns. I thought and I still think that it's right for Weinberg – or any instructor – to be the true "governor" in his own course. And because Weinberg doesn't use weapons himself, he should have the ability to locally ban them in his classroom.

My main reasoning is that weapons are useful weapons – but they may be used both by good and bad people, for good and bad goals. In Weinberg's classroom, the weapons may give some "extra power" (at least a power to bully) to people who may dislike Weinberg or his comments and that is, I believe, extremely harmful for the academic freedoms and the quality of the class.

In the broader European context, a ban on legally held weapons unavoidably means a weakening of the European population in possible confrontations with criminals, including the terrorists from the Middle East. And that's just deeply wrong. People's ownership of weapons always brings some risks and the owners are always somewhat random people but the laws should always try to guarantee that the reasonable, law-abiding, and responsible people are much more likely to hold weapons than the other people.

The EU seems to fight for the opposite outcome.

Today in the morning, the Czech member of the European Commission Ms Věra Jourová (billionaire Babiš's ANO party) has finally unmasked the mechanisms that guarantee that the members of this institution behave as brain-dead. She is no longer thinking as a Czech because just like all other EU commissioners, she has undergone the mandatory EU "lobotomy". The purpose of the lobotomy is for the commissioners to forget where they come from and what kind of people they were before they joined the European Commission. After the "lobotomy", they must only discuss the topics as "EU experts" in their portfolio, not people with independently functional brains or opinions or values. When she wanted the job and the high salary, she knew what she was going into, we learn, but she still found out that the expectations are worse than she expected.

She also says that she's annoyed by the Czechs in the EU who love to create problems for other Czechs. It's a typically Czech attitude, one that she hates, and I share this particular observation with her.
Luboš Motl v 6:54 AM
Share