Socialists are murdering the economy of Venezuela right now

Venezuela is becoming the latest role model for nations that are incapable of curing themselves from leftism and from the leftists before it's too late.

The country is sitting on a huge amount of oil. Petroleum accounts for more than 50% of the GDP. So you may imagine that the low prices near $25 a barrel earlier in this year didn't help. But the prices are back around $50 and even when they were closer to $100 two years ago, things began to look really bad for Venezuela.

Hugo Chávez, the Bolshevik dictator, took over in 1999 and was dragging his country towards a socialist "paradise" up to his death in 2013. Nicolás Maduro, a Chávez yes-man, became the successor. He has less charisma than Chávez used to boast – but his politics is equally socialist.


In the mid 1980s, the socialist Czechoslovakia had some shortage of toilet paper for a few weeks. Things got solved but this very episode was an incredible example of the ability of the anti-market economic systems to ruin really basic things. You really wouldn't expect such things in a country that was among the top 10 world economies (by the absolute GDP) in 1929.


I am mentioning the toilet paper because it is currently impossible to buy it in Venezuela, too. The toilet paper may apparently be used for a nice litmus test proving a socialist deterioration in an advanced stage.

A story in The Atlantic published two weeks ago, Venezuela is falling apart, started with an incredibly frustrating story about an entrepreneur who was arrested because he was capable of securing enough toilet paper for his employees.

The labor unions were allowed to include a weird clause in their collective bargaining agreement that if the entrepreneur doesn't have toilet paper in the corporate restrooms, he immediately faces lethal problems. The workers-thieves started to steal the toilet paper so he showed the power of entrepreneurship and bought the toilet paper somewhere, for a higher price. But the secret police was already checking his company. Recall that the contract says that he had to have the toilet paper there. But the secret police said that he isn't allowed to have enough stuff if others don't have it so the Bolshevik aßholes simply arrested him.

Such situations – that the best people are unavoidably screwed whatever they do – are basically unavoidable in a regulated economy. 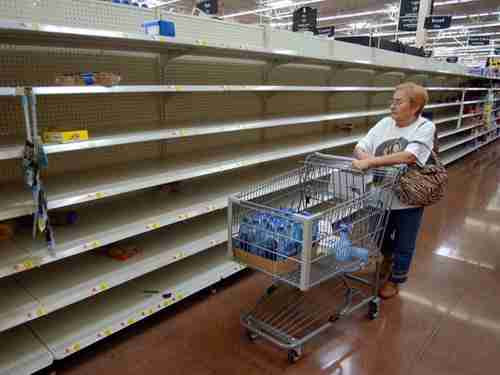 Winston Churchill once said “Socialism is a philosophy of failure, the creed of ignorance, and the gospel of envy, its inherent virtue is the equal sharing of misery.”

You don't need a PhD to understand that an advanced country where this aggressive left-wing filth takes over is pretty much finished. These days, the inflation rate reached some 300% in Venezuela in February and is expected to reach 500% by the end of the year and, according to the IMF, maybe 1,642% in 2016. The real GDP dropped by 5% in 2015 and will probably add another 8% drop in 2016 (see Bloomberg).

The picture above shows an average supermarket in that country. Is it true that meat has been seen in Caracas? Yes, the exhibition is a mobile one. And as the Bloomberg story and others indicate, Lufthansa will terminate flights to/from Venezuela on Wednesday because no one in the country is paying the German airline. Venezuela has also become one of a handful of countries in the world that no longer produce Coca-Cola. The company (Mexican Coca-Cola Femsa) had to stop the production because the country has basically run out of sugar, too.

It's now predicted that despite a population that will be higher by 20%, the overall GDP of the country in 2020 will drop to the level from 2005 again. Venezuela is also selling its gold reserves by billions of dollars to repay the debts. The government closed courts and other public bureaus in a desperate struggle to save electricity.

Venezuela managed to nicely survive almost a decade or so under Chávez. At the beginning, he was talking more than acting. Later, there was still some inertia and perhaps a lot of excited work by volunteers. But none of these things is sustainable. An economy rebuilt into a similar socialist paradise is guaranteed be in a huge trouble within a decade or two.

The government is already softening its stance and negotiates with the opposition because their mismanagement has become way too obvious. But Venezuela doesn't really need some diluted compromises with the left-wing government or a perestroika. It badly needs someone like Pinochet who will deal with Chávez's posthumous children assertively.
Luboš Motl v 9:17 AM
Share