Who has blocked the Nobel Prize for relativity

Jimena Canales, an Illinois professor, wrote an interesting essay for Nautil.US about a tense debate of Albert Einstein with a super duper famous person I have never heard of:


This Philosopher Helped Ensure There Was No Nobel for Relativity


To make the story short, the man was Henri Bergson, a French philosopher, and the bloody interaction – which had been assumed to be a friendly intellectual debate – took place on April 6th, 1922. Just to be sure, Einstein has received the prize known as the 1921 Nobel Prize for physics but he received it in November 1922 and the end of 1922 was also when the recipient and the justification were decided, I think.

I don't realize that I've ever heard of Bergson – and I think that I will forget the name by tomorrow or earlier, but we learn that this philosopher has been compared to Don Juan, Socrates, Kant, Simón Bolívar, and even Donald Trump. Despite the huge articles in the Times etc., Einstein was a nobody in comparison, we are asked to believe. Bergson had some wonderful philosophical theory about time and millions of would-be intelligent people were worshiping him.


Now, Einstein's opinions about many things could have be inaccurate – that may have included his opinions of time (because of his confusion about quantum mechanics). For example, the "free will theorem" of quantum mechanics (or equivalent results) sort of forces us to adopt the "presentist" picture of the spacetime – while Einstein had almost certainly preferred the "eternalist" one (although the "eternalist" picture of the spacetime was mostly incorporated into our thinking by Minkowski, not Einstein, and relativity doesn't really depend on "eternalism", of course). But my feeling is that none of these issues could have influenced the discussion in 1922.


You may guess what the points of the disagreement between the two men would be. I did guess and the article has mostly confirmed my expectations. Einstein has primarily argued that time should be discussed by as a physical and psychological concept – yes, he listed both and it's very reasonable that he did (the psychological aspect of the time discusses our memories and their effect on our thinking about the future etc.).

The third notion of time, the "philosophical one", didn't really exist, Einstein argued, and what it was proposed to be was some incoherent conflation of the psychological and physical time. Moreover, it was one using wrong physical models, as the insights about the behavior of time near the speed of light have shown. To one extent or another, Einstein said all the basic things that I would say, too. Bergson has claimed that his theory of time or duration was explaining and correcting some misconceptions that the ordinary people had about time but given the fact that these misconceptions had nothing to with relativity, I am not sure what they could have possibly been. In my opinion, Bergson was just bullšiting most of his life. 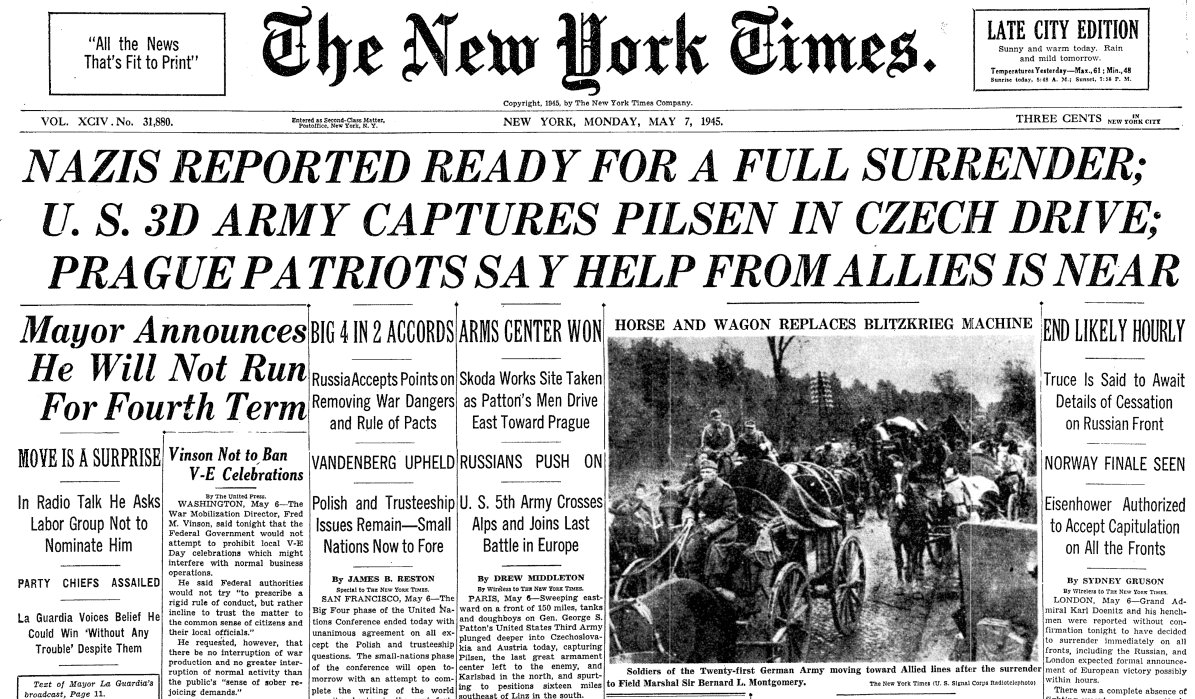 Off-topic. We have celebrations of the liberation by the U.S. army in Pilsen again. It was 71 years ago. Lots of historical military cars, some veterans. Some problems with parts of the festivities. Our basic school's current principal – she was a "Civil Education" brainwashing teacher during communism – couldn't swallow a U.S. flag so there's only a Czech one at the school. Also, due to stability issues, two smaller "Thank You America" quasi-Washington Monuments in Pilsen had to be removed. The U.S. ambassador tweeted a fun photograph from the New York Times published exactly 71 years ago. Has Pilsen ever made it to the top title of NYT at a different moment? ;-)

(Thankfully for Einstein, he made other Nobel-caliber discoveries that would have made him immune against about 5 or so additional obnoxious philosophers. I do think that aside from the photoelectric effect, each "theory of relativity" could have been enough for a Nobel prize; the prediction of some particular phenomena, like the bending of light around the Sun, could have been enough by itself; Einstein's work on the Brownian motion was arguably a Nobel-prize-caliber discovery, too; and so were the "Einstein coefficients" insights about the emission, absorption, and Bose-Einstein statistics.)

In the early 20th century, physicists had its headquarters in Europe and physicists generally studied philosophy and appreciated philosophers. Philosophy was referred to as a tool that was allowing them to make major advances. But they were still revolutionaries of a sort – and Einstein was at least one of the greatest ones. There were unavoidably philosophers who were simply "not getting it" and Bergson was a prominent example.

We live in a world that is sometimes crazy and incompetent people often influence things they shouldn't. But I think that the Nobel prize decisions have made some positive progress from 1922. I believe that the Nobel physics committee wouldn't pay attention to a philosopher, even a famous one. Maybe it's because the status of philosophy has generally declined. But whatever is the exact reason, such a philosopher – even a famous one – would probably be considered a non-expert and therefore irrelevant.

But I was actually surprised to learn that the committee would listen to Bergson in 1922. Wasn't the Nobel physics committee composed of physicists? Shouldn't have their decisions been based on their expert physicists' opinions about the theories and achievements? Who were the people in the committee and why were they affected by someone like Bergson?

Now, did Bergson actually understand the physical content of relativity? He published "Duration and Simultaneity: Bergson and the Einsteinian Universe" (originally in French) which I haven't read. But if he understood relativity, I can't imagine how he could treat Einstein in that way during discussions about time, a concept that was so strongly affected by Einstein. I basically think that whoever understands relativity must also love relativity and admire Einstein for having found it.

The notion of time has physical and psychological aspects, as Einstein said, but I totally agree with the basic point that there is no "third" major aspect of time that could be called philosophical. If I read some Bergson's comments about time, they sound as a mostly trivial and vacuous, partly wrong exercise in "broken physics" or "broken psychology". What he says about time isn't like a view from a different respectable scholarly discipline. It looks like a view of a physicist that just happens to be a completely incorrect one.

Philosophy used to be the name for all the thinking done by the smart men (in the Greco-Roman world). But the individual disciplines have crystallized and thinkers got specialized and philosophy was reduced to the "rest" of the smart men's thinking, talking, and writing that hadn't been conquered by the newer, more specialized disciplines of science (or social science). But when the new disciplines take their portions of the "time", is anything left for the truncated philosophy?

Well, like Einstein, I think that the answer is basically No. Physics – and maybe even psychology – have become much more specific and well-defined and their content became sharper. Bergson has represented an old epoch of the philosophy which wasn't really viable – the kind of semi-poetic talk that impresses ordinary enough people (those who like to consider themselves smart) even though it proudly ignores all the detailed progress in physics or psychology or another discipline – which is why I think it's right that Bergson has been largely forgotten and I will forget his name by tomorrow again, too.

When it comes to the foundations of quantum mechanics, philosophers still do influence the "thinkers'" discourse – most philosophers basically deny quantum mechanics and many people who think that they are smart about foundational issues simply copy those attitudes. However, I would add that the Nobel prize committee probably doesn't listen to the anti-quantum zealots; and the anti-quantum zealots are not only professional philosophers. After all, Einstein himself was a pioneering one, too.
Luboš Motl v 6:54 AM
Share