This will be an extremely short blog post because one month ago, I discussed the search for gluinos by ATLAS based on the very same final states with 1 lepton, jets, and MET. See the relevant May 2016 paper.


Search for top squarks in final states with one isolated lepton, jets, and missing transverse momentum in \(\sqrt{s}=13\TeV\) \(pp\) collisions with the ATLAS detector


Unsurprisingly, the same 8 muon events (plus 4 electron) events appeared in this search as well. They are just interpreted differently now.


In a highly inclusive SR1 (signal region one), the excess was quantified as 2.3 sigma. No discovery but a cute deviation not to completely forget about. 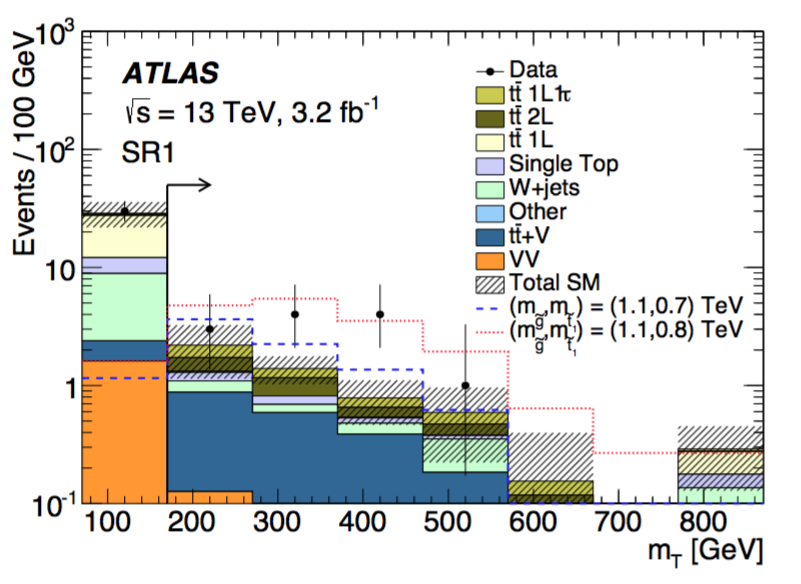 On the right side of the following chart, you may see that the expected exclusion curve (dashed) was actually more ambitious than the observed one. 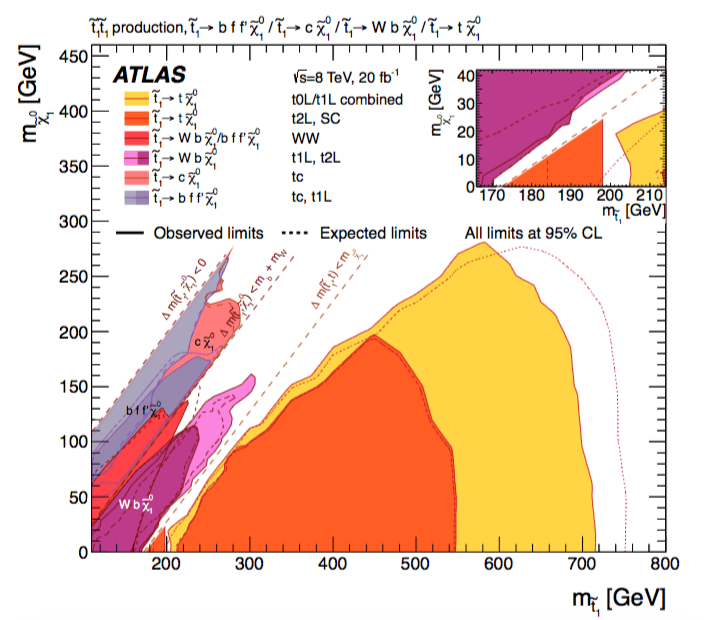 With some optimism, you could suggest that the yellow exclusion region was repelled from the "truth" which may include a top squark of the mass between \(700\GeV\) and \(800\GeV\).

Julia Gonski, a Harvard PhD student (and a Rutgers alumnus with a thesis about SUSY at CMS!), wrote a short intriguing report about this ATLAS excess. The title, "Can't stop, won't stop: the continuing search for SUSY" is nice. Note that the word "stop" may refer to the top squark.

\] sigma excess. That would be terrifying and we would hear about it in August. Note that the gluino interpretation of the channel suggested a \(1250\GeV\) gluino. Both a \(1250\GeV\) gluino and a \(750\GeV\) stop (probably no relationship to the diphoton bump is possible) would be a dream. ;-)


Related: The Lindau meeting of Nobel prize winners has began. Check e.g. a Twitter tag. David Gross said some interesting things. Supersymmetry is more compelling than any other physics beyond the Standard Model. Gross has made some large bets on it, too. Also, the \(100\TeV\) collider is the next level. He also said that rumors can't be stopped but physicists should behave correct. And pointed out that Chu was wrong to say that no physics beyond the Standard Model has been observed: neutrino masses have to be coming from BSM physics because the bare Majorana mass terms aren't gauge-invariant.
Luboš Motl v 10:34 AM
Share