Not too many things are happening in Britain's adventures that should lead to the departure from the EU. I am actually disappointed by the attitude of folks like Boris Johnson who don't seem excited enough and eager to act. Did Boris want to win at all? Was he prepared for that option? He should have been!

More events are arguably taking place on the continental side of the channel. Nicola Sturgeon is a Scottish nationalist prime minister, a proud feminist, and a left-wing demagogue screaming about "austerity" in ways that resemble folks like Alexis Tsipras. The introduction of an independent Scotland to EU could be similar to inviting another Greece – even though it would be just a softcore Greece. I guess that an independent Scotland would be far less fiscally responsible than the U.K. has been. Thankfully, the feminist was snubbed by everybody today.

Jean-Claude Juncker safely (5-to-1) survived the attempts in the European Parliament to remove him. It's sad and emphasizes the similarity of the EU to the USSR.


Meanwhile, the Visegrád Four (PL+HU+SK+CZ, the current president of V4) met in Prague and Breitbart.com wrote the sexiest report from that meeting:


It's based on an Euractiv story which is less exciting and that story was based on some even more boring documents released by the Visegrád Group.


It's refreshing to see that the "Visegrád identity" starts to matter a little bit. There seems to be a voice of sanity coming from these four countries of ours. The Express describes these modest proposals as a "big revolt" that has fractured the EU, according to a map. ;-) 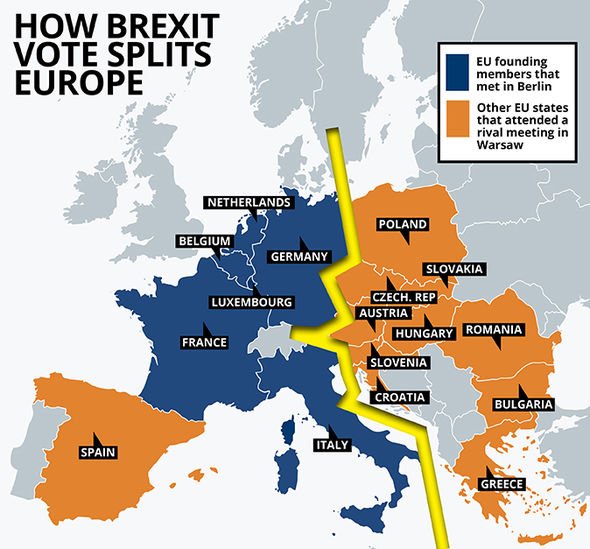 Franco joined our rival meeting against the Axis Powers. ;-)

V4 prime ministers ultimately decided not to demand Juncker's dismissal – they knew that it would be a losing game, anyway. So the opinions of the foreign ministers of Poland and Czechia that Juncker represents everything that is wrong with the EU remained their personal opinion.

But V4 leaders seem to agree that something is wrong with the EU and a reform is needed:


The genuine concerns of our citizens need to be better reflected. National parliaments have to be heard. The institutions of the European Union need to stick to their missions and mandates. Trust also needs to be fostered among member states, starting with overcoming the artificial and unnecessary dividing lines we have seen emerging in past few months.


Well, I endorse these statements although they sound more peaceful than they could. But the content doesn't differ too much from the content of petitions against the communist regime sometime in 1989, shortly before the fall of communism. They're saying something that pretty much everyone agreed with. The people and nations aren't being listened to. The leadership became untrustworthy for too large a percentage of the citizens of the EU member states.

The trust needs to be restored and the EU Commission should be less power-thirsty. It should only do things that it's supposed to do and avoid things that should be done by individual nations, especially those that are deeply divisive.

Also, the V4 group proposes a different kind of a leadership of the EU in the negotiations with the U.K. Juncker's commission wants to do these things. V4 proposes that the negotiations should be led by the European Council and its boss, Donald Tusk – who is the closest to the "formal president of the European Union".

Note that even the Polish side has endorsed this view although Donald Tusk is a "major internal political foe" of the Law and Justice party of Jaroslaw Kaczynski, the party that controls the government in Poland right now. But they still seem to believe that Tusk would do a fairer job than Juncker and his pals. Well, Kaczynski himself blames Tusk for most things but at least Szydlo didn't break the V4 unity.

It's very clear what's going on. Juncker leads the actual "executive branch" of the EU government – if we compare the EU to a country. It's this Juncker's commission that is responsible for this mindless, non-democratic overintegration, overregularion, and overcentralization, not to mention the intentional Islamization of Europe and the fight against the climate change, if I have to pick two specific insanities. Donald Tusk is not doing much and in this case, doing almost nothing is the preferred choice. That's why Tusk is obviously more acceptable.

In most practical questions, there's no difference. Both Juncker and Tusk insanely insist on the free movement of people as a criterion for the U.K. to remain in the free-trade zone. These EU apparatchiks are absolutely irresponsible. The U.K. may very well say "No" and the losses on both sides would be huge.

Before the Velvet Revolution, the Czech public had a similar feeling about different parts of the communist government and the people in it. Sometime in 1987, President Gustáv Husák lost his leadership in the Czechoslovak Communist Party but kept the presidency. Even though Miloš Jakeš was seemingly picked as the new boss of the communist party to lead the perestroika process, it was widely appreciated that he was one of the classic old-fashioned neo-Stalinist cadres while Husák himself was more decent and compatible with the world (after all, other communists kept Husák in prison and wanted to arrest him sometime in the 1950s). Also, the Czechoslovak prime minister Štrougal was considered a bit more open towards actual reforms.

So Juncker is clearly analogous to Miloš Jakeš while Donald Tusk could be a Štrougal or at least Husák which is still pretty bad but a bit more acceptable. ;-)

Needless to say, I think that the European Union should kindly ask Václav Klaus to lead the divorce process on behalf of the EU. He may be the man with the best record in the mankind's history in a smooth separation of a territory. There's actually a nonzero probability that the Slovak EU presidency that will begin on Friday will try give this job to Klaus. But let's not be too optimistic. The EU presidency is mainly a job for secretaries and their coffee machines. The actual power is elsewhere. But Bratislava will host a September 16th summit on the future of the EU (without the U.K.) so we may be pleasantly surprised.

Aside from the unity, one may still see numerous vastly different reactions coming from V4, too. For example, Poland indicated that it wanted to speed up their entry to the Eurozone. Everyone in Czechia seems to say that there's no reason for us to do such a thing.

BTW: Nigel Farage gave a nice speech in the European Parliament yesterday. The Parliament has shown it's almost full of immature ruminants who have never done a useful thing in their life and don't intend to do so in the future, either.
Luboš Motl v 6:30 PM
Share