British voters have chosen to exit the European Union, 52-to-48 or so, which is the ethically correct decision. For example, the Klaus Institute praises Britain as a heroic essential country of Europe that decided to challenge the megalomaniac European plans for the third time – Napoleon, Hitler, Juncker ;-) and that created a wonderful opportunity for the Old Continent. However, the apparent costs are so intense that – I admit – I would have voted Bremain if I were a Briton yesterday.

PM David Cameron, the boss of the "Stay" camp, announced resignation later in the morning, saying that he isn't the right captain to steer the ships (British islands) now. Czech right-wing party chairman Prof Fiala says that the resignation of Tusks, Junckers, and Schulzes who have caused the problems would be more appropriate than Cameron's. Meanwhile, the world markets have kickstarted an absolute hysteria. This reaction could have been expected – we saw a small demo of that hysteria exactly 2 weeks earlier when polls indicated that the Leave side was ahead.

Within hours, the British pound lost some 8% on the dollar from $1.50 below $1.37 – low levels of the pound last seen in the 1980s. And the pound has seen the threshold $1.32 for a while, too. The stock markets are typically losing up to 10%, too. I am convinced that this hysteria is absolutely insanely unjustifiable. It doesn't reflect any underlying reality. And if economic problems begin, they will be consequences of the irrational hysteria itself, not the underlying event – Brexit – that is claimed to "justify" the havoc.


These intense reactions are partially caused by lots of small and large traders' trying to see correlations and make bets. Many people and traders "sell everything" when there are "news of a certain kind" (like Brexit) although they don't really know why. "Everyone else" is doing the same. People have trained themselves to think that Brexit is a "negative for all risky assets and the pound" and they have only amplified this assumption by watching that the correlation has worked.

But I think that too many people are simply scared of everything and anything. After decades in which the men of the Western civilization were emasculated and taught that they should be terrified by the increase of the temperature by 0.8 °C per century and similar "catastrophes", they are simply afraid of everything. When a change more important than a 0.8 °C warming – e.g. Brexit – emerges, they go into the state of a complete hysteria. It's sad but it's true.

For another example, my father isn't emasculated but he is completely brainwashed and he is already predicting a world war and collapse of the mankind. Holy cow. I didn't really object much, it seems meaningless – it's not comprehensible to me how I could consider my father a political guru when I was 8 or so. ;-)


Lisa Randall tweeted that she is sorry to see the death of the British science. Wow. So I told her that much of the British science – and all of it before 1993 (not just Isaac Newton and James Clerk Maxwell) – was created before the EU or without the EU or independently of it. She didn't care: the EU has "funded it". I wrote that the U.K. has been a net payer to the EU funds so it's silly to say that the EU has paid something in the U.K. Someone else said that only 10% of the U.K. science is formally funded by the EU. But I think she doesn't care. She wants these extreme, insane overreactions to spread – whether there is anything true about them or not. So her readers are asking us whether the Britons will be banned from international collaborations etc. etc. No, all these suggestions are absolutely idiotic. Even CERN which is "European" is completely independent of the European Union and has lots of non-EU member states, starting with Switzerland where it's partly located, you know. ;-)

This havoc doesn't have truly rational causes – especially because the U.K. will have the same status for about 2 years when it is negotiating conditions of its divorce from the EU – but it may have very tangible consequences. They may be just a short term blip that is already fading away (within hours?) but there may be longer-term consequences if things aren't managed.

I do believe that the central banks of the world should agree with me that the havoc is fundamentally unjustified yet dangerous and they should work to undo it – and purchase basically all the affected assets including baskets of stocks to drive them back approximately to Thursday's levels (and sell lots of gold and yens which went up) and keep them near these levels for weeks – until the insanity sort of calms down. Central banks in India and Japan have already indicated their post-Brexit-vote desire to intervene in forex markets but the interventions shouldn't avoid other affected markets, either. Bank of England "will not hesitate to act". Switzerland and Kenya are already intervening.

More generally, I believe that the Western (and not so Western) financial markets should have the mechanisms – a kind of insurance – to counteract similar events that dramatically change the "overall level of fear". As I have said before, the "overall level of fear" is a macroeconomic quantity whose constancy is more important than the constancy of other things and central banks should find ways to keep this quantity as stable as possible, ways that are as fair and "not affecting price ratios" as possible. This constancy is highly desirable for the overall efficiency of the economic activities and it could be defined as the main task for a central bank.

(By the way, I believe that the Czechoslovak crown didn't change substantially when Czechoslovakia was dissolved.) 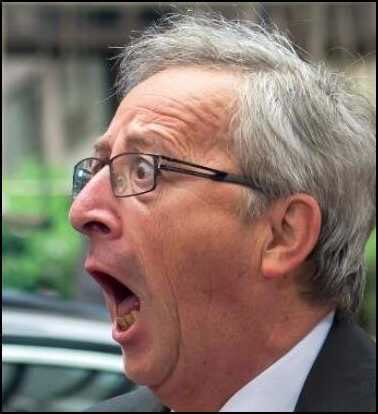 Juncker reacted relatively calmly. I am already working on the replacement of this leader by Václav Klaus as the head of the transitional EU government back towards freedom.

Congratulations to the Brexit advocates. But I agree with the opponents of Brexit that the victory is sour because of the financial chaos. Politicians and central bankers should quickly adapt to the new reality (the EU has been rejected in Britain, get used to it!), start to behave cooperatively (attempt to bring as much velvet to the divorce as possible), and make steps that rebuild the confidence of people in the U.K., Europe, and the rest of the world. 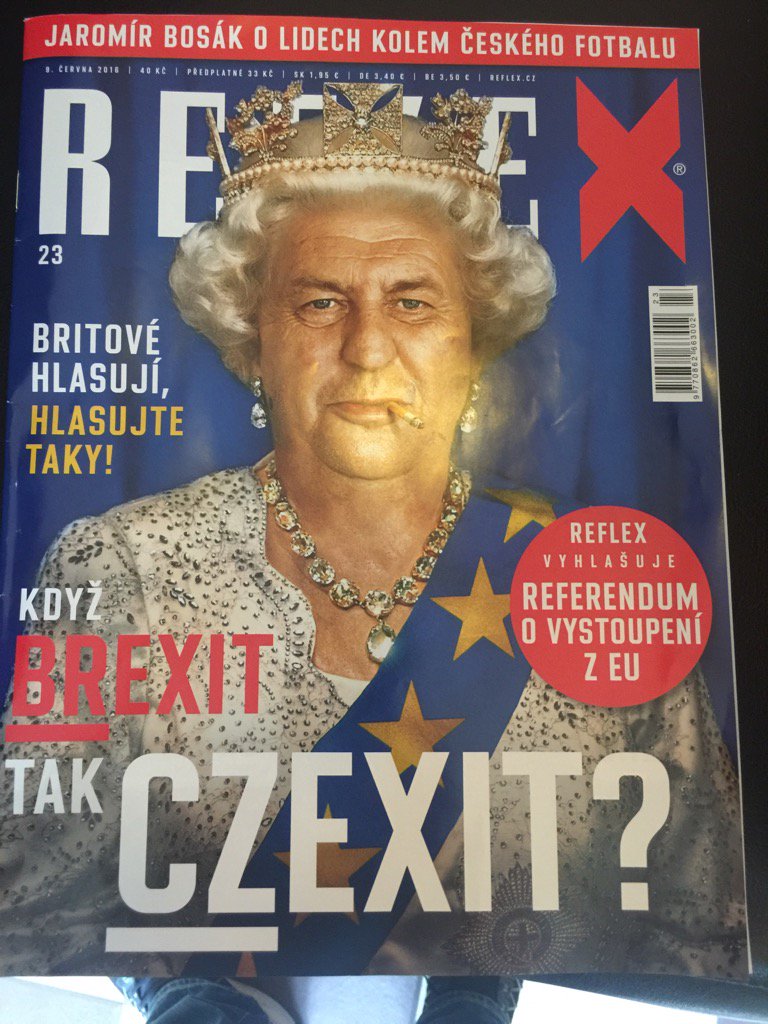 Magazine Reflex where I used to contribute is already planning Czexit, including a new Czech queen Miloš Zeman.

If the EU doesn't want to disintegrate completely, it simply has to start to listen to critics of its policies. The EU has to start a perestroika. Euroskeptics in several other countries (Czechia, Denmark, the Netherlands, ...) are showing their newly energized self-confidence. (Only after Brexit was endorsed by the voters, people realized that the classic regular English word for "Czexit" is "Czech-out".) Any arrogant behavior of the EU will morally strengthen the "Leave" camps in these countries and so will any attempt of the EU bureaucrats to punish the U.K. Even if the rest of the EU were able to harm the U.K. without harming itself almost equally – and I don't think it's physically possible – the opposition to the arrogance of the EU is not primarily economically driven. I am sure that many British people voted "Leave" even though they believed that it could bring themselves some losses. The EU will have to stop with many things considered serious problems by the Euroskeptics. Big programs to Islamize the continent by force will have to stop.

Note that most Britons don't care too much that the pound has dropped, however. For example, the average Briton's savings are just 6,000 pounds or so. So even relatively to the U.S. dollar, they lost some $500. (Well, the Britons' houses also lost the value but I don't want to discuss all asset classes – houses aren't sold often.) Many others – including lots of TRF readers, I am sure – are losing more by orders of magnitude because of their exposure to stocks. As you might expect for these reasons, rich (but also young) people were much more inclined to stay in the EU.

But the fans of the EU in the U.K. have simply lost the referendum – a tool of democracy. They should react analogously to decent tennis players who lose the Wimbledon finals. It's not the end of your life. You may still act as a Gentleman and constructively. I am confident that the Brexit victors themselves will act as Gentlemen.
Luboš Motl v 7:29 AM
Share