Czechia, the main defender of the Second Amendment in EU

Czechia is objectively one of the safest countries in the world. For example, in the newest 2016 Global Peace Index that the Australian IEP Institute released yesterday, Czechia is the #6 most peaceful country after Iceland, Denmark, Austria, New Zealand, and Portugal, and ahead of Switzerland, Canada, Japan, and Slovakia. The table 6.4, the "militarization domain", shows Hungary, Czechia, and Iceland as the top three most peaceful countries. 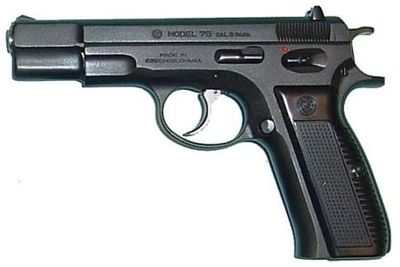 A ČZ 75 pistol. Over a million of those have been made since the 1970s. Incidentally, the word "pistol" most likely originates in the early 15th century Czech language. A Hussite weapon was known as a "píšťala", a flute. Similarly, the "howitzer" comes from the Czech "houfnice", from the same period.

This result obviously wasn't made impossible by the fact that Czechia has one of the highest numbers of legally owned weapons per capita. As I mentioned one month ago, 0.775 million out of 10.5 million people have certificates or licenses to hold guns. Each recipient of the certificates or licenses is carefully tested in a system that is analogous to driving licenses, see Gun politics in Czechia.

Tomorrow, the EU ministers of interior will gather in Luxembourg and discuss a new proposal penned by the Dutch EU presidency to disarm the Europeans. In particular, most of semi-automatic guns are supposed to be completely banned and liquidated – with no exceptions allowed. The excuse for this policy are the terrorist attacks in Paris etc.

Virtually all Czech experts and politicians across the political spectrum (not to mention 40,000 signatories of a petition) agree that this justification of the proposed plan is utterly idiotic because the terrorists aren't acquiring legal weapons for their malicious acts. They use the illegal ones! On the contrary, terrorists would have easier conditions if no peaceful people will be able to confront them. The interior minister Milan Chovanec, a former social democratic governor of the Pilsner region, has been ordered by the government to veto all major proposals to abuse the EU to harass innocent gun owners.


The Czech ministers and lawmakers are convinced – and want to convince the rest of Europe or the world – that Czechia should be considered the ultimate role model in the right approach to guns. It just happens taht Czechia will be the most unequivocal opponent of the proposed bans. It's not so surprising. In our country, the ban would threaten 300,000-400,000 legally held weapons!


You should realize that it is an astonishingly high number.

A big majority of these gun owners would probably become big enemies of the European Union (if they're not big enemies yet). It could also be the case for a few family members and friends of each gun owner. It seems sensible to say that such an unwise policy could create a million of new, truly visceral haters of the EU in Czechia – including gamekeepers, sport shooters, owners of collections, museums, people who possess arms for their defense, and also people working in the production of guns: about 20,000 jobs would be immediately threatened by the orders to disarm just in Czechia. The only other similarly "big disarming of the public" in the Czech history took place right after the Nazi occupation in 1939. Is the EU happy to be in this company?

While Czechia is the staunchest opponent of the policy, it's expected that the rest of the Visegrád Group (Poland, Hungary, Slovakia, and Czechia) will also oppose the planned draconian gun control, along with Austria and Finland (and maybe the Baltic countries). On the other hand, it seems almost certain that France, Belgium, and Italy will support the regulation. The attitude of other countries is unknown to the Czech media.


we [the Czech government] aren't afraid of our own citizens. We are not frightened by the people who hold guns in agreement with the law and who fulfill all of their duties.


It seems rather clear that certain politicians in the rest of Europe, especially in Western Europe, couldn't say the same sentence. Either these people are really clueless and don't understand the difference between legal and illegal guns and their holders; or they deliberately want to disarm the population of Europe so that it becomes easier to control or occupy the countries.

The 1420 battle of the Vítkov Hill in Prague. That's when "pistols" and "howitzers" were born. It was one of the famous battles in which the Hussite Czech protestants – with their somewhat modest rural outfits, flags with the chalice, weapons simultaneously used as agricultural tools, partly female staff, and greatly outnumbered – totally humiliated 100,000-200,000 of their Catholic crusader foes led by Sigismund, a German son of the famous Czech king Charles IV. The Hussite fame lasted up to 1434 when they lost the critical final Battle of Lipany. The guy without one eye is the de facto general Jan Žižka. The suburb under the Vítkov Hill is now known as Žižkov, after him.

I personally think that the most frequently correct explanation of this idiotic proposal is the political correctness that has run amok. The people proposing these harmful policies want to pretend that they're not capable of distinguishing an Arab terrorist from a law-abiding Caucasian gun owner. So they think it's a wonderful idea to punish the latter for the crimes of the former!

Already 1,200 amendments of the bill have been filed that will have to be debated in the European Parliament – which is why the tomorrow's vote of the EU member state ministers won't be the last word. This huge number is often mentioned as another piece of evidence showing that the draft is one of a very low quality. The minister and others point out that the regulation was written by an amateur and uses nonsensical and ambiguous phrases and concepts such as "similar weapons".

If the misguided policy is approved, the Czech ministry will try to minimize the effect on our homeland. The first step will be try hard not to implement it at all, the minister said. My idea is to make the guns "officially illegal" and rename the bill about the legally held weapons to a "law about illegally held weapons". So these weapons would be renamed as "illegal ones" but they would still follow the same laws as today. They could also be confiscated but they would be returned back for CZK 1 etc. And the idiots in the EU could be asked to lick their rectum.

Lawmaker Roman Váňa mentioned another clever solution adopted in Finland. Legal owners of some weapons were formally affiliated with the army as "reserves" which made it OK for them to hold the guns.

The Friday negotiations ended up with a result that is much worse than expected by our media: Czechia was the only country that found the proposed bill unacceptably tough relatively to the gun owners. Three countries voted against the proposal – but Poland and Luxembourg did so because it wasn't harsh enough! Some other sources however claim that Poland's position was close to Czechia.

This is just one particular policy but it may be enough to see that we don't belong to that union – or that the union doesn't deserve us, whatever is your perspective.

Slovakia's interior minister said that he understood the Czech view and it was correct but Slovakia is obliged to vote "Yes" because it will acquire the EU presidency in 3 weeks – what a reason!

Today in the morning, folks in Prague were witnesses of the fact that in our homeland, the dangerous people often use very different tools than legal guns – and sometimes comical ones – to threaten the public. A semi-naked foreign nutcase has climbed to the roof of the semi-abandoned National Theater Warehouse in the Viničná [Vineyard] Street in Prague 2 (downtown – that's exactly the street where Einstein worked at the German University in the 1910s) and was throwing bricks and rocks at the pedestrians.

He hasn't hit anyone yet. I am among those who were surprised why this individual hasn't been removed from the roof quickly. Couldn't they send a special unit with a helicopter?

The place is very close to the oldest building of my Alma Mater, Faculty of Mathematics and Physics of the Charles University; to a psychiatric asylum; and to the embassy of Luxembourg (where the gun control will be discussed tomorrow).
Luboš Motl v 3:48 PM
Share